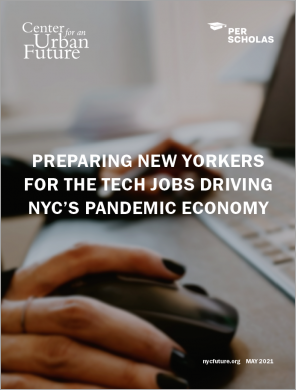 Despite widespread job loss and economic turmoil due to the pandemic, demand for tech occupations has remained strong. In this report, CUF examines which roles are in demand and what it will take to get more New Yorkers access to the quality tech jobs fueling NYC's economic recovery.

New York City ended 2020 with roughly 600,000 fewer jobs than it had when the COVID-19 pandemic began. But even amid the economic carnage of the past year, some employers in New York have been hiring. While new jobs are being created in fields from warehousing and delivery to healthcare, technology positions are growing the fastest.

This analysis of data on New York City job postings collected by Burning Glass Technologies reveals that technology jobs lead all other occupations in total hiring demand during the pandemic. Despite the pandemic-fueled surge in healthcare hiring, there were more job openings in tech roles (67,923) than in healthcare occupations (60,266) between April and November 2020. Demand for tech hiring was also more than double that of finance, more than triple that of marketing, and almost five times larger than demand for hospitality or for education. In total, nearly one in five (18 percent) of all jobs posted from April to November was for a tech position.

The total number of openings for software developers/engineers from April to November (21,268) exceeds that of any other occupation and is more than double every other job except for physicians (12,899). But developers are far from the only tech role in high demand. Tech roles comprised 11 of the top 50 most in-demand positions, including IT project manager (4,104), network engineer/architect (3,066), web developer (2,678), cyber/information security engineer/analyst (2,670), computer support specialist (2,541), computer systems engineer/architect (2,438), data mining analyst (2,182), systems analyst (1,939), and UI/UX designer/developer (1,921).

This analysis also finds a greater range of different occupations with significant hiring demand in tech than in any other field. For instance, 19 tech occupations registered at least 1,000 job openings from April to November, compared to 14 healthcare occupations, 10 in finance, 6 in hospitality, and just 4 in clerical and administrative roles.

In addition, our analysis finds strong demand in a number of other occupations that are not exclusively tech roles but have a major tech component or are widespread in the tech sector. These include business development/sales manager (6,837, 5th highest demand), marketing manager (6,762, 6th overall), business/management analyst (6,208, 8th overall), product manager (3,531, 18th overall), and recruiter (2,046, 42nd overall), among others. Among all New York City job openings posted from April to November, fully 55 percent require strong digital skills.

Although tech occupations outpaced all other sectors in job postings during the pandemic, tech hiring in New York was not nearly as robust as it was in the pre-pandemic economy, an indication that tech firms were not immune to the challenges of the pandemic and also a testament to the remarkable growth in technology jobs in the years leading up to 2020. Between April and November of 2020, the number of technology job postings was down 37 percent compared to the same months of 2019. This is on par with the decrease in hiring demand for other leading occupation groups like sales (down 40 percent), finance (down 37 percent), and marketing (down 38 percent). Among the city’s ten largest occupation groups, only healthcare saw relatively stable demand (decreasing just 2.2 percent from 2019 to 2020). 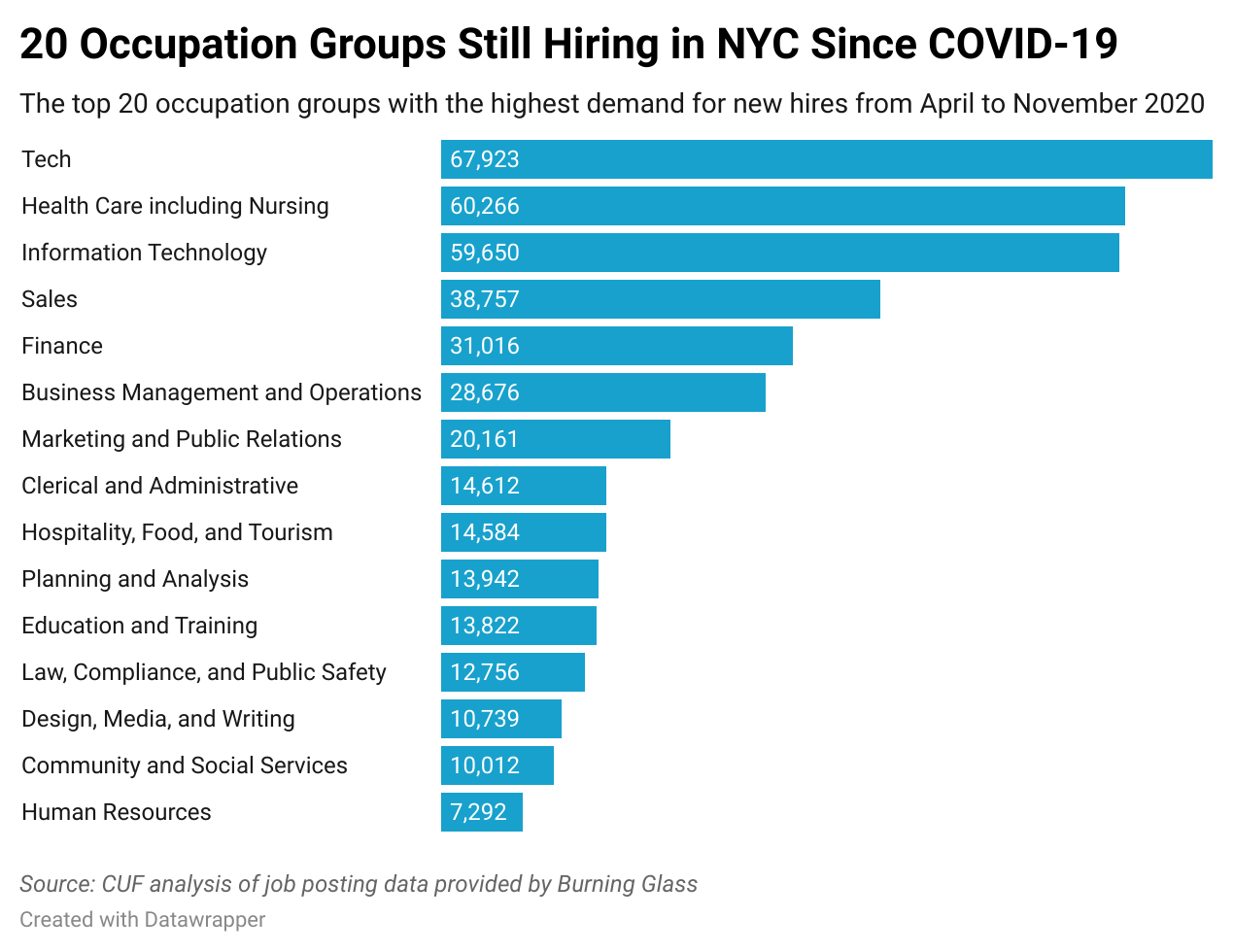 Despite this overall slowdown in hiring, demand for tech positions continued to drive growth in multiple industries during the pandemic—not just the tech sector, but in healthcare, finance, marketing, and education, among others. For instance, our review of active job postings in New York City listed on the jobs portal Indeed in March 2020 shows 4,083 open positions for “software developers” and 2,111 for “cloud engineers”—including multiple openings at financial firms, media companies, hospitals, airlines, logistics companies, universities, and charter schools, among many other employers outside the tech sector.

An analysis of job placements in 2020 for alumni of Per Scholas, a nonprofit provider of training for careers in technology, underscores the growing demand for tech talent across a range of different industries. The total number of job placements among Per Scholas alumni fell just 16 percent compared to 2019, even as the city lost hundreds of thousands of jobs. Our analysis of more than 300 tech-focused job placements for Per Scholas graduates in 2020—out of several hundred in total—found that nearly 7 percent were in educational institutions, while 13 percent were in hospitals and other healthcare organizations. Recent alumni have been hired to provide help desk and software rollout support for hospitals and to deploy iPads and Chromebooks with remote learning software for the New York City Department of Education.

Over the past decade, the tech sector was one of the fastest-growing parts of New York’s economy and the city’s most reliable source of new middle- and high-wage jobs. The continued strength of tech hiring during the pandemic suggests that tech has become even more pivotal to the city’s economy and will likely be one of the main engines of New York’s job growth in the post-pandemic economy. It’s also clear that technology fields present a crucial opportunity to get New Yorkers back to work. 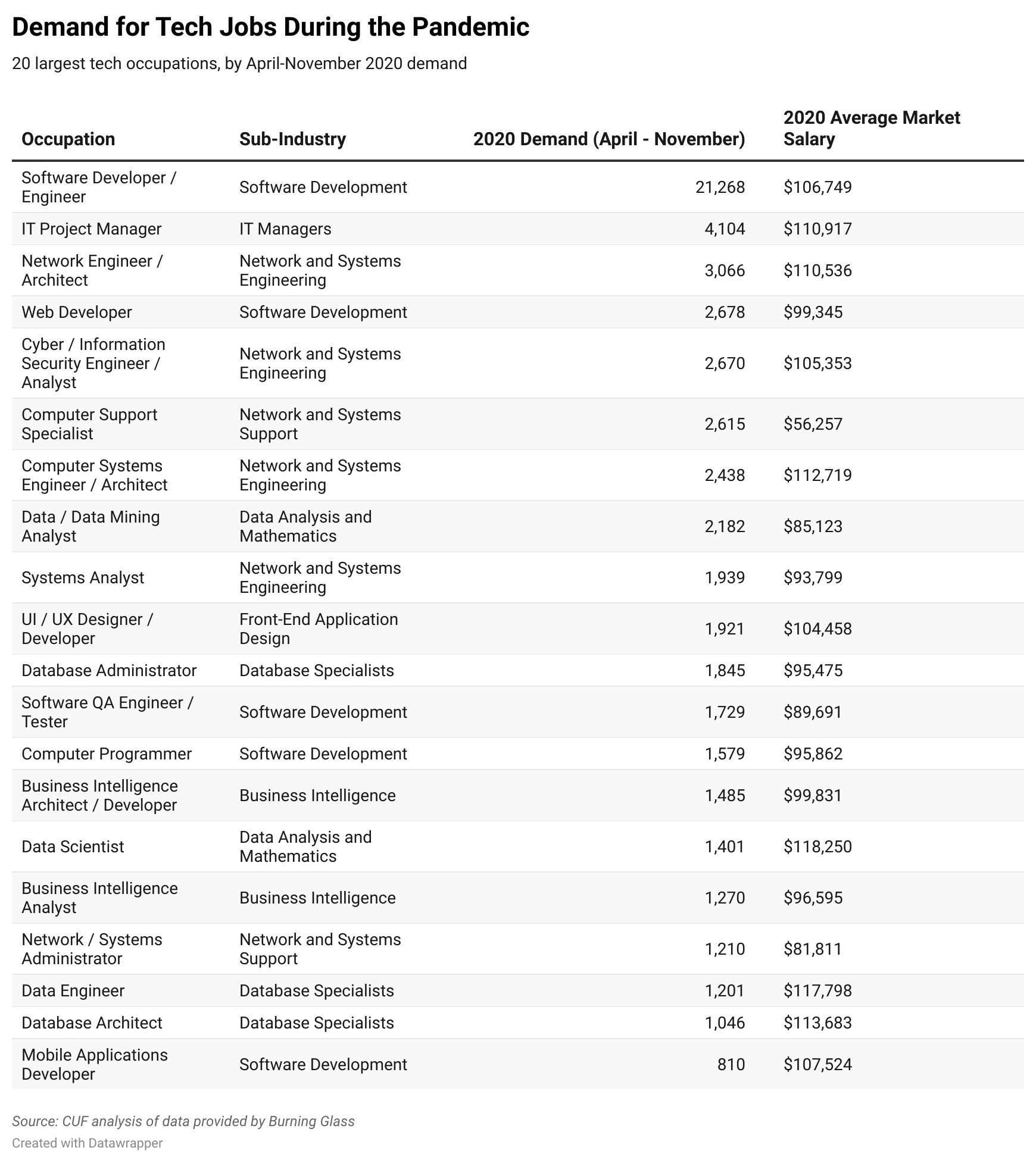 “Tech jobs not only weathered the pandemic most successfully but will continue to thrive in an increasingly digital post-pandemic world,” says Will Markow, managing director at Burning Glass Technologies. “This means tech jobs in New York will rebound faster than other career areas, but it will also give rise to a new generation of tech-enabled workers in all corners of the economy—from retail and hospitality to maintenance and healthcare. This will create hybrid jobs that blend digital and non-digital skills in new ways.”

To seize this opportunity and ensure an equitable recovery, city policymakers will need to ramp up investments in workforce development programs that are geared towards technology roles. Indeed, our research finds that much more is needed to prepare New Yorkers for tech openings
and to create viable pathways into these growing occupations for displaced workers across the five boroughs.

A study published in February 2020 by the Center for an Urban Future and Tech:NYC found that New York City’s network of tech training and education programs lacks the scale and reach to make the city’s tech workforce significantly more inclusive. While the report pointed out that the city’s tech training and education ecosystem has come a long way in recent years, it also revealed striking programming gaps, geographic disparities, and capacity challenges that limit the effectiveness of city efforts to diversify the tech workforce and develop a pipeline of local talent for New York’s tech companies.

However, our new data analysis of tech hiring trends finds that workforce development organizations also have work to do. We find that the city’s tech skills-training and workforce development programs will have to adjust their services to meet post-pandemic employer needs, including by supporting upskilling for alumni and advanced training for their own staff.

Tech Hiring: The Occupations Most in Demand

Even as overall demand for tech positions—like most roles in the city’s economy—saw decreases compared to 2019, certain occupations fared better than average, posting relatively small declines. For example, computer programmer hiring demand was down just 18 percent (from 1,929 to 1,579); computer scientist was down only 22 percent (from 150 to 117), and cyber/information security engineer/analyst was down 25 percent (from 3,890 to 2,914). Moreover, a few tech occupations actually saw a modest increase: for example, demand for biomedical equipment technicians increased from 140 to 144 openings, video game designers increased from 15 to 19, and robotics engineers increased from 26 to 28.

Strong demand for software developers and engineers has continued through the pandemic, with these roles seeing more hiring demand (21,268 openings) than the entire group of occupations
in the hospitality sector (14,584 openings).

“Software engineering is always going to be the biggest nut to crack for us,” says Brendan Collins, campus outreach manager at Google in New York. “The need for CS and engineering majors is virtually limitless.”

But many other tech occupations also experienced high demand, according to our analysis. And our conversations with recruiters, hiring managers, and tech workers suggest that a good portion of these positions are in companies outside the tech sector. For instance, one program manager working in the financial industry says the percentage of software jobs in finance is “now a larger share of hiring than before the pandemic.” “I didn’t necessarily expect to land in finance,” says Joary Lizardo, a 2018 Per Scholas graduate recently hired in cybersecurity at Barclays, a global financial services firm. “But then this opportunity presented itself—and finance is more tech-dependent than anything nowadays.”

This report is a publication of the Center for an Urban Future (CUF) produced in partnership with Per Scholas. Researched and written by Sarah Amandolare and Eli Dvorkin with data research by Charles Shaviro. Edited by Laird Gallagher.

The report was made possible through support from Google.

CUF and Per Scholas would like to thank Burning Glass for providing the job posting data that was analyzed throughout this report. We would also like to thank the many individuals, including HR officials from tech employers and workforce development experts, who participated in several focus groups that were held as part of the research for this report.

For more than twenty-five years, Per Scholas has advanced economic equity through rigorous training for tech careers, and connecting diverse and skilled graduate talent to leading businesses.

Why Are Some NYC Restaurants Struggling to Find Workers? It’s Complicated…

Stitching Together A Business In The Garment District During COVID

This report was produced in partnership with Per Scholas and made possible through support from Google. Data provided by Burning Glass Technologies.