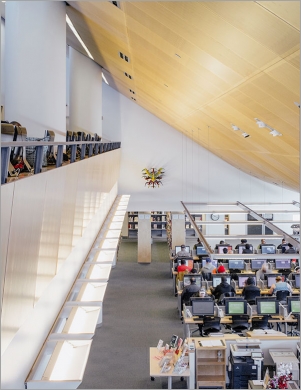 This new data brief finds that NYC’s public libraries are playing an increasingly important role in helping New Yorkers develop the technology skills needed in today’s economy. It shows that the city’s libraries provided tech training to more than 150,000 New Yorkers in 2015, an 81 percent increase from just three years earlier.

If New York City is going to succeed in reducing inequality and put more New Yorkers on the path to the middle class, it will need to significantly increase the number of city residents with digital skills. That’s because so many of the good-paying jobs being created in today’s economy require some level of technology skills. These jobs include the bulk of opportunities in the city’s soaring tech sector, but also a growing share of the positions in more traditional fields, from health care to manufacturing, which are adopting new technologies at a rapid clip. In fact, a recent report by Burning Glass found that 88 percent of middle-skill jobs in New York were digitally intensive.

General operating support for the Center for an Urban Future is provided by the Bernard F. and Alva B. Gimbel Foundation, with additional support from the Lucius N. Littauer Foundation and the M&T Charitable Foundation.

Although many of these technology jobs have the potential to boost New Yorkers into the middle class, alarmingly few residents from the city’s low-income communities are equipped with the tech skills that are in such high demand.

The de Blasio administration is attempting to address this skills gap through its promising Tech Talent Pipeline initiative. In addition, a number of nonprofit and for-profit entities across the city–from Girls Who Code and Access Code to the Flatiron School–are providing scores of New Yorkers from underserved communities with the coding, programming, and web-development skills that so many employers now require.

But some of the most important efforts to boost digital skills are coming from an unlikely source: the city’s public libraries.

As this data brief shows, the city’s three public library systems served more than 158,000 people with technology training programs in 2015. This represents an astounding 81 percent increase from just three years ago, when the libraries served 87,000 people.

Beyond simply serving tens of thousands of New Yorkers, the libraries are reaching many who aren’t being served by other digital training initiatives. One of the libraries’ advantages is that, with 217 branches, the systems have a physical presence in nearly every community throughout the five boroughs.

The massive Mid-Manhattan Library served the most people with tech training programs in 2015 (14,704 attendees). Surprisingly, the Parkchester branch in the southeast Bronx had the second highest attendance (9,462). It was followed by the Morningside Heights branch in Manhattan (7,454), the Castle Hill branch in the Bronx (5,980), the Countee Cullen branch in Harlem (4,486), the Brooklyn Central Library at Grand Army Plaza (3,908), the Stephen A. Schwarzman building in Midtown (3,835), the Chatham Square branch in Chinatown (3,770), and the Wakefield branch (3,630) in the north Bronx.

Much of the growth in the libraries’ tech training programs is occurring in neighborhoods whose residents are underrepresented in the city’s tech workforce. In fact, 38 of the 50 branches with the greatest growth in tech program attendance between 2012 and 2015 are located outside of Manhattan, with 15 in Brooklyn, 14 in the Bronx, 7 in Queens and 2 on Staten Island.1 And of the twelve Manhattan branches on the list, three are in Harlem, one is in Chinatown, and one is on Roosevelt Island. The following branches posted the largest growth in attendance for tech training programs:

The libraries’ technology programs run the gamut from high-level coding courses to more basic computer classes. While some are more in-demand than others–New York Public Library’s Project Code program currently serves just 400 people and has a wait-list of 5,000–they are all contributing to a more digitally literate workforce.

The importance of these programs is hard to understate. Employment in the city’s tech sector grew by 71 percent from 2004 to 2014 (from 68,571 to 117,147 jobs), far outpacing the overall job growth in the city’s economy.2 Yet, many of the city’s tech companies struggle to attract workers with the technology skills they need. At the same time, although many low-income New Yorkers would jump at the chance to get a decent-paying tech job, too few of these residents have the digital skills that employers require. One consequence is that tech companies do not resemble New York City as a whole: African Americans make up just 9 percent of the city’s tech workforce, while Hispanics account for only 11 percent.3

As city policymakers continue to develop strategies for addressing the tech talent gap and creating pathways to the middle class, libraries should be seen as a crucial part of the equation.

LIBRARIES TEACH TECH is a publication of the Center for an Urban Future written by Jonathan Bowles, researched by Kathleen Gorman, edited by Eli Dvorkin, and designed by Ahmad Dowla. Photo of Bronx Library Center by Ross Mantle.

General operating support for the Center for an Urban Future (CUF) is provided by the Bernard F. and Alva B. Gimbel Foundation, with additional support from the Lucius N. Littauer Foundation and the M&T Charitable Foundation.

Center for an Urban Future is a catalyst for smart and sustainable policies that reduce inequality, increase economic mobility, and grow the economy in New York City. An independent, nonpartisan policy organization, we use fact-based research to elevate important and often overlooked issues onto the radar of policymakers and advance practical solutions that strengthen New York and help all New Yorkers participate in the city’s rising prosperity.

New School Vibes Among the Old School Stacks
Next City

New School Vibes Among the Old School Stacks
Next City