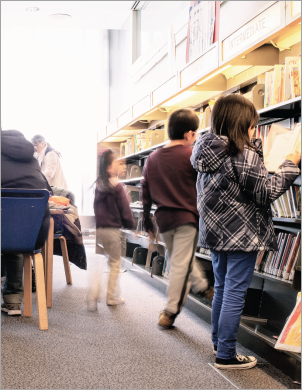 NYC Libraries by the Numbers

Despite declining funds and limited hours of service, New York City’s public libraries are seeing a surge in users and uses. Below we show where the growth is happening and how funding cuts in recent years have affected performance, and provide the city’s first branch-by-branch accounting of book circulation, program attendance and visits.

In today’s information economy, New York City’s public libraries have become dynamic learning environments with an uncommonly wide range of services and resources. No longer just book repositories, libraries are places where teens can geek out on computers, the unemployed can improve their resumes, and immigrants can learn and practice English. They are community spaces where people are encouraged to share stories and impart advice, where volunteers can donate their skills and teach a class on knitting or film editing. They are platforms for community organizations and neighborhood groups, and resources for budding entrepreneurs and hobbyists.

Since the early 2000s, New York City’s 207 library branches have leveraged their status as community anchors and their ability to draw on volunteers as well as librarians and other trained staff to dramatically increase the number and type of public programs on offer. Between Fiscal Years 2002 and 2014, annual attendance at these programs increased by 67 percent, or 1.1 million attendees. In Fiscal Year 2014, nearly 2.8 million New Yorkers attended a class or workshop or some other event at their local library, compared to just 1.7 million in Fiscal Year 2002. With the advent of e-lending and the proliferating selection of downloadable materials, circulation has been on the rise over the last 13 years as well. Since Fiscal Year 2002, checkouts of both physical and electronic books and other items has risen 30 percent, going from 43.4 million materials in 2002 to 56.3 million in 2014.

Whether it is program attendance or circulation, no borough has seen bigger increases over this period than the Bronx. Between 2002 and 2014, libraries in the Bronx experienced a 225 percent increase in attendees at public programs, while Manhattan libraries jumped 172 percent, Staten Island branches 87 percent, Queens branches 70 percent, and Brooklyn branches 22 percent over the same period. Since 2002, branches in both Manhattan and the Bronx have experienced a 35 percent rise in circulation, while Brooklyn libraries saw a 29 percent rise. Circulation dropped in Queens (-5 percent) and Staten Island (-9 percent) over this period.

Among the top 50 libraries by annual visitors, Manhattan has 15, Queens 15, Brooklyn 12, the Bronx 6 and Staten Island 2. Unsurprisingly, the city’s five large regional libraries—including Brooklyn Central, Queens Central, Mid-Manhattan, Flushing and the Bronx Library Center—attract the most library patrons. Every year, these five libraries see a combined 6.4 million people walk through their doors, welcome 288,000 attendees in their public programs and check-out 8.8 million materials. But a number of other relatively small neighborhood branches attract an enormous number of patrons every year, including Kings Highway, McKinley Park, New Utrecht, Midwood and Jackson Heights, all of which are in the top ten citywide by circulation, or Ridgewood, Long Island City, Seward Park, Riverside and Clason’s Point, which are in the top ten by program attendance. Among New York’s smallest libraries (10,000 square feet or less), McKinley Park, Corona, Sunnyside, 58th Street, Lefferts, Windsor Terrace, and Cortelyou are all extremely popular branches, with each having over 200,000 visitors per year.

Remarkably, the city’s three public library systems—including the New York Public Library, which covers the Bronx, Manhattan and Staten Island, the Brooklyn Public Library and Queens Library—have managed to expand programming and attract new patrons in a flat or even slightly negative funding environment. Operating support from the city, which is so critical for keeping the doors open, the branches staffed, and the collection of books and other resources up-to-date, has declined by 4 percent in inflation adjusted dollars since Fiscal Year 2002.

Funding cuts after the September 11th terrorist attacks and then again after a full restoration of six-day service in 2008 caused the libraries to reduce staff and service hours and cut way back on the purchase of new materials. Since Fiscal Year 2009, when the libraries received over $360 million in subsidies (inflation adjusted), a bump due in small part to retroactive payments to unionized staff, funding has dropped 10 percent. And although program attendance figures have continued to rise over that period, circulation has dropped significantly. After reaching a peak of 69 million materials in 2011, circulation dropped 18 percent to 56 million materials in 2014.

As detailed in table VIII, Mayor de Blasio’s Executive Budget does not increase funding over the next four years. The three library systems estimate that the funding level proposed for Fiscal Year 2016 will have to rise $65 million in order to reach the level of service last seen in 2008 and 2009. 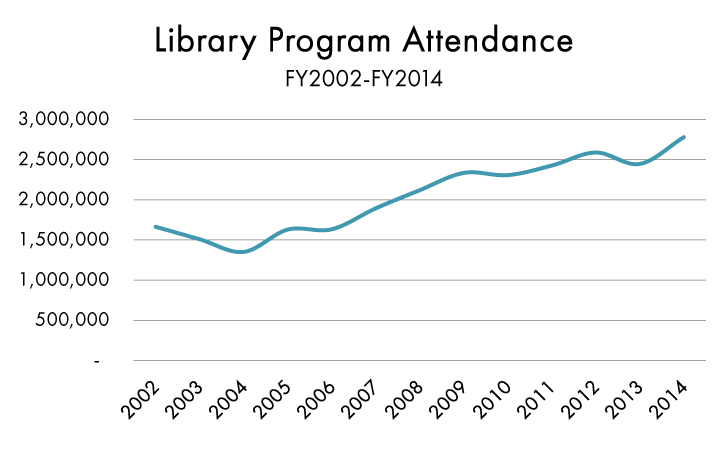 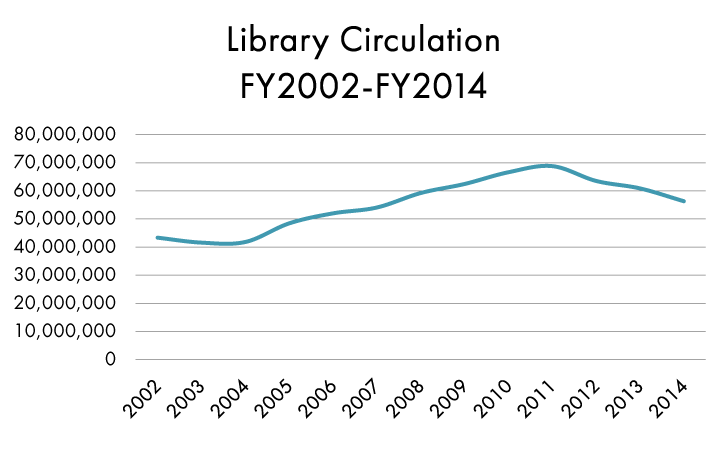 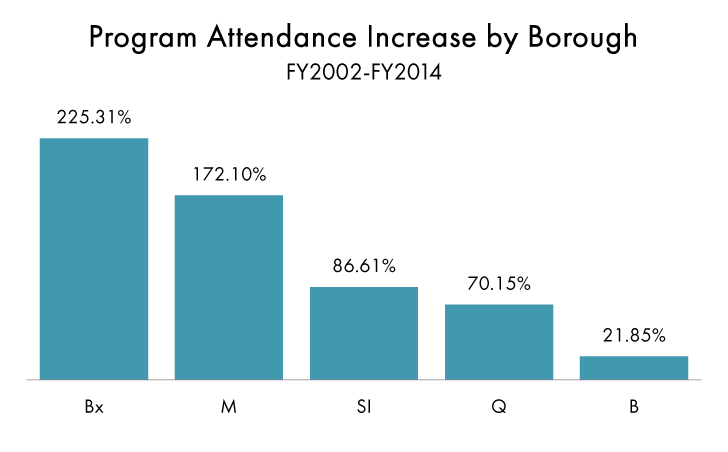 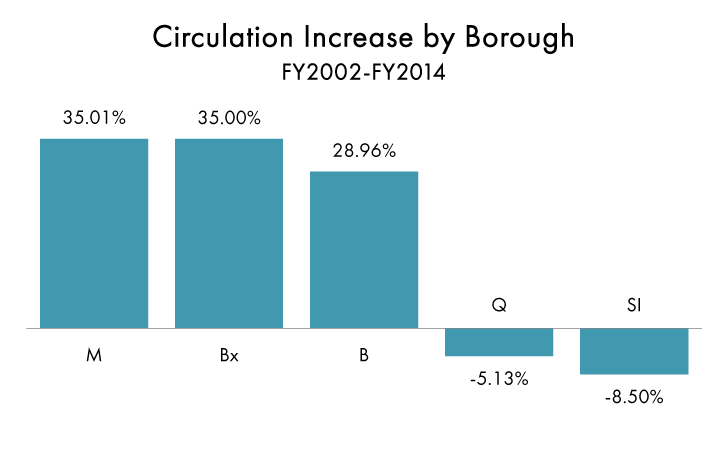 Sources: IBO; Mayor's Office of Management and Budget; New York City Comptroller's Comprehensive Annual Financial Report (CAFR). Figures for FY 02-14 are actual expenditures as reported in the CAFRs. Figures for FY 15-19 are from the FY 16 Executive Budget. Inflation adjustments were made with the Bureau of Labor Statistic's Inflation Calculator and use 2015 constant dollars. Totals include city subsidies to NYPL's four research library locations. 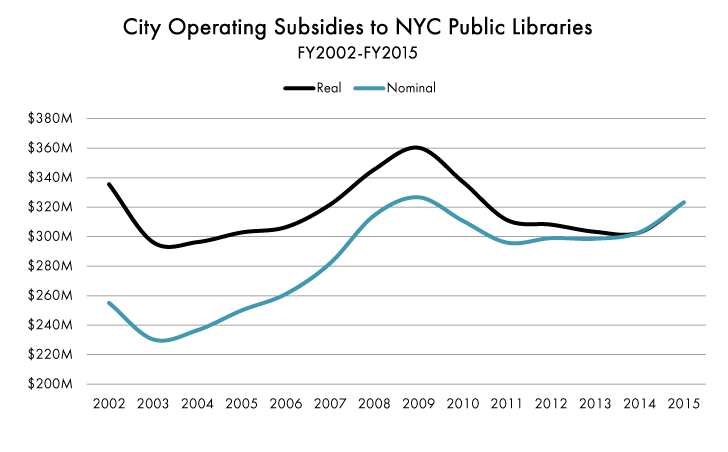 Note: All library performance data, including program attendance, circulation and visitor data, were provided by the New York Public Library, Brooklyn Public Library and Queens Library. Some branch numbers may have been affected by prolonged closings due to renovations or repairs. In the tables, blanks are not equivalent to zero but rather indicate that data was not applicable; in most cases this was because a branch did not exist or was closed for the entire fiscal year.

This data analysis was written by David Giles with research assistance by Jeanette Estima. Design by Ahmad Dowla.


There Will Soon Be Zero Bookstores In The Bronx

The NYPL’s temporary Grand Central branch won over the community. Now it might close

There Will Soon Be Zero Bookstores In The Bronx
Gothamist

There Will Soon Be Zero Bookstores In The Bronx
Gothamist