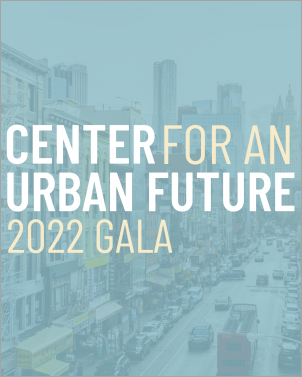 The Center for an Urban Future's 2022 gala celebrated a year in which CUF has sparked several important city and state policies that are helping to create a stronger and more equitable economy in New York, including: a major new initiative to re-enroll working adults at CUNY, prompted state officials to extend the Tuition Assistance Program for part-time CUNY and SUNY students, sparked the creation of new teen library centers across the five boroughs, influenced a new City Hall working group to reform the capital construction process for libraries, parks, and other critical infrastructure, contributed to the creation of the state's first Chief Disability Officer, and and influenced other new policies supporting New Yorkers with disabilities, minority-owned businesses, human services nonprofits, and immigrant artists.

We also celebrated honorees who have made a difference for our city:

URBAN VISIONARY AWARD
Presented to: Dr. Gerrard P. Bushell
Presented by: Félix V. Matos Rodríguez, Chancellor, City University of New York
Gerrard, President and CEO of The New Terminal One Development at JFK, is an urban innovator who has executed critical infrastructure projects in New York while dramatically expanding contracting opportunities for entrepreneurs of color. His leadership of the New Terminal One Development at JFK is bolstering one of the key pillars of New York’s economy, creating good jobs, and enabling dozens of minority- and women-owned businesses to expand their operations through new procurement opportunities. In his previous role as President and CEO of the state’s Dormitory Authority, he led tens of billions of dollars in infrastructure investments while besting the state’s 30 percent MWBE goals.

SPIRIT OF NEW YORK AWARD
Presented to: Eric Gertler
Presented by: Maria Torres-Springer, NYC Deputy Mayor for Economic & Workforce Development
Eric, the Executive Chairman and CEO of U.S. News & World Report, is one of New York’s most visionary leaders in the field of economic development. While leading Empire State Development during the earliest days of the COVID pandemic, he championed numerous innovative programs that helped stabilize critical parts of New York’s economy—including the largest program to support small businesses in the state’s history—and laid the groundwork for a sustained recovery. He also oversaw the completion of cornerstone infrastructure projects like the redevelopment of Moynihan Train Hall and the expansion of the Javits Center. And in various roles under multiple NYC mayoral administrations, he spearheaded bold investments in life sciences, the tech sector, and other emerging industries, as well as path breaking efforts to diversify the workforce.

NEW YORK CHANGEMAKER AWARD
Presented to: Linda E. Johnson
Presented by: Brad Lander, Comptroller, City of New York
In her 11 years as President and CEO of Brooklyn Public Library, Linda has transformed BPL into one of the nation’s most innovative library systems and one of New York’s most important opportunity institutions. Under her leadership, BPL has launched game-changing programs to strengthen the communities hardest hit by the pandemic, bridge the digital divide, ensure an accurate Census count, and extend library services to homeless shelters, correctional facilities, and senior centers. She has made BPL an indispensable partner in efforts to build a more equitable city, and with BPL’s Books Unbanned Initiative, a crucial antidote to censorship.

FUTURE OF NEW YORK AWARD
Presented to: Accenture
Presented by: Kathryn Wylde, President & CEO, Partnership for New York City
Accenture’s learn-and-earn model program targets individuals who do not have four-year college degrees, providing apprentices with market-based wages and comprehensive benefits while building cutting-edge skills needed for a successful future and helping to create a more inclusive and diverse workforce. These career-building roles are in high-wage and high-demand technology disciplines, like application development, cybersecurity, data engineering, and cloud and platform engineering. The program has expanded across several cities in the United States, and has become a key component to Accenture’s pipeline for diverse talent. In doing so, Accenture is increasing the representation of women and people of color at all levels and helping cities across the country, including New York, make crucial progress towards a more equitable economy.