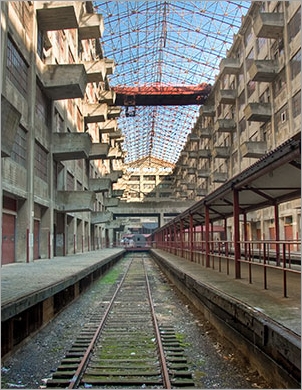 Mayor de Blasio's plans to redevelop unused space at the city-owned Brooklyn Army Terminal echoes a recommendation made in the Center's "The Final Frontier for Manufacturers" report.

In May 2014, Mayor de Blasio announced plans to spend $100 million to transform 500,000 square feet of raw, unusable space at the Brooklyn Army Terminal into affordable space that could be leased by dozens of manufacturing companies. The mayor’s decision to redevelop uninhabitable space at this city-owned industrial building echoes a recommendation the Center for an Urban Future made in a report titled The Final Frontier for Manufacturers (PDF).

Our report called on the city to invest in redeveloping two enormous government buildings in Sunset Park that, if renovated, could provide space for several dozen small and mid-sized manufacturers: Building A at the Brooklyn Army Terminal and Federal Building #2, formerly owned by the US FDA. “With few vacancies at the Army Terminal and a shrinking amount of industrial space throughout the five boroughs, building out the remaining space in Building A is an investment worth making,” concluded our report. “If renovated, it could provide reasonably priced space for several dozen small and mid-sized businesses.”