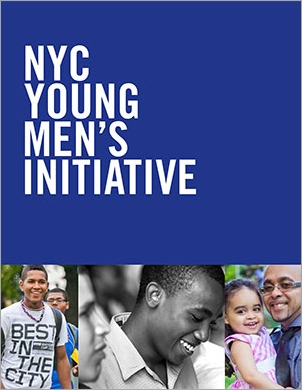 In November 2013, we highlighted 10 important anti-poverty innovations from the Bloomberg administration that deserved to continue. We're pleased to report that Mayor de Blasio recently announced that his administration will build on one such innovation, the Young Men's Initiative.

Our November 2013 Innovations to Build On report noted that the de Blasio administration will need to tackle a number of serious social policy challenges but argued that there is much to build on—including 10 important anti-poverty innovations from the Bloomberg administration. One innovation we highlighted was the Young Men's Initiative and we're pleased to report that Mayor de Blasio wil continue the policy. In February 2014, he stated, "I think it's a fantastic project and we look forward to building upon it."

The Young Men's Initiative was created to address the alarming achievement gap between young men of color and their white and Asian counterparts. For instance, less than half of all African American boys finish high school and only 18 percent of black males aged 18 to 21 are enrolled in college. Meanwhile, the unemployment rate for black and Latino young men is 60 percent higher than white and Asian young men, and their poverty rate is 50 percent higher. This $43 million three-year initiative provided mentoring, training and rehabilitation services to young black and Latino men who drop out of high school and experience much higher rates of incarceration than their white and Asian counterparts.