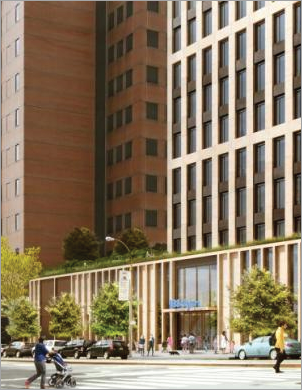 With the city’s public libraries facing a maintenance crisis, CUF executive director Jonathan Bowles says that policymakers should be open to innovative funding approaches. In testimony before the City Planning Commission, he argues in favor of a proposal to build a modern new branch library in Brooklyn Heights as part of a larger residential development. Under the proposal, the developer would also contribute around $50 million towards library improvements at branches across Brooklyn.

Good afternoon. Chairman Weisbrod and members of the Commission, thank you for the opportunity to speak here today.

My name is Jonathan Bowles and I am the executive director of the Center for an Urban Future, an independent think tank that publishes studies about how to grow and diversify New York’s economy and expand economic opportunity.

In recent years, the Center has taken a close look at how New York City can expand opportunities for economic mobility for city residents. We’ve published reports looking at:  how to improve the city’s youth workforce development system … how to increase graduation rates at the city’s community colleges … how to strengthen the state’s adult education system … how to bolster ESOL programs in New York …. and how to expand the number of low income entrepreneurs.

As part of our ongoing research on economic mobility in New York, we’ve also written extensively about the city’s public libraries.

New York’s libraries are truly opportunity institutions. At a time when far too many New Yorkers are struggling to make the transition to today’s knowledge economy, it’s arguable that no institution is doing more to bridge the gap than the city’s public libraries.
They are helping adults upgrade their skills and find jobs, assisting immigrants learn English, fostering reading skills in young people, serving as an important community space for older adults, and providing technology access for those who don’t have a computer or an Internet connection at home.

They are also serving a record number of New Yorkers today.

As important as the city’s public libraries have become, however, they are facing a maintenance crisis today.
As we have documented, the libraries’ existing infrastructure has greatly hampered their ability to deliver services and fulfill their potential for community development and individual empowerment.

A report we published in September 2014 found that the average branch library in the city is 61 years old, with a quarter of the city’s 207 branches built over a century ago. It also showed that the city’s three library systems have at least $1.1 billion in capital needs, with 59 different branches requiring $5 million or more in maintenance work.

Across the city, many buildings have faulty ventilation and air conditioning units and elevators that constantly break down; some are still inaccessible to people with disabilities; roofs are leaking over books and into playrooms, and many simply don’t have enough space to accommodate the growing demand for literacy and after-school programs, computers and quiet spaces to work.

The Brooklyn Public Library’s branches are in especially bad shape. The average branch library in Brooklyn is 65 years old, and 51 of Brooklyn’s 59 branch libraries have at least $1 million in state of good repair needs. That’s 86 percent of the borough’s libraries.

Another 16 of the borough’s branches have at least $5 million in repair needs. Meanwhile, 17 of Brooklyn’s library branches are over 100 years old and the borough’s branch libraries had 140 unplanned branch closures in 2013, an equivalent of 540 lost service hours, mainly due to malfunctioning heating and cooling systems.

The Brooklyn Heights branch has approximately $9 million in capital needs—for a new HVAC system, as well as a new boiler, a new elevator, and a new roof, among other things. The branch has had to resort to closing early on hot summer days because of an inadequate cooling system. And while the existing branch building is over 60,000 square feet, much of this is below grade and therefore used for archival storage. The reality is that only 28,000 square feet of the current building is publically accessible, and that space is being used by two separate libraries. One is a community library serving Brooklyn Heights and one is a business and career library serving the entire borough of Brooklyn.

I am favor of the current proposal to redevelop the Brooklyn Heights library and I urge the commission to support it.

The plan to redevelop this building will help BPL meet two critically important goals: It will create a bigger and more modern community library that better meets the needs of Brooklyn Heights residents and it will help address decades of deferred maintenance at other branches across the borough.
At 21,500 square feet, the new Brooklyn Heights library will be bigger than the community library space in the current building, and it will be bigger than 90 percent of the 207 other branches across New York City. In Brooklyn, only 5 other branches and the Central library would have more space than this.

The current building’s Business and Career Library will move to the central branch at Grand Army Plaza, where it can better supplement other services that BPL provides to entrepreneurs and job seekers such as the Workforce One Center and the Shelby White and Leon Levy Information Commons. Having the business library’s specialized collection and services, including the Power Up business competition, next to the equipment and classes of the Information Commons, which serves many freelancers and entrepreneurs working in technology and digital media, will increase the effectiveness of both centers.

Importantly, the sale of the Brooklyn Heights branch will also raise $52 million that will be re-invested in the new Brooklyn Heights library as well as other branches across the borough. Like Brooklyn Heights, many of these branches are in dire physical shape. For example, BPL plans to direct some of these funds to the Walt Whitman branch in Fort Greene, which we identified in our capital report as having only two electrical outlets available for patrons and is so small and poorly configured that the meeting room is mainly used for storage space.

Though there is no question the proceeds from the Brooklyn Heights sale will go back into the physical plant needs of BPL, having these funds come back to the library in the form of operating dollars rather than capital dollars would be preferable. With $40 million in operating funds, BPL would be able to move much faster to address critical infrastructure needs. And it would be able to better leverage this windfall investment to raise funds from philanthropy.

Developing new libraries inside of larger mixed-use buildings is not the correct approach for most library buildings and locations. But, if done thoughtfully, this model could bring major benefits to a number of other communities across New York. At a time when building new libraries costs $1,200 per square foot, the city could save tens of millions in capital costs while accommodating hundreds of units of new housing. Libraries that are too small to serve their communities effectively could be expanded and libraries that are at risk of flooding could be protected. In areas where the library is cut off from the rest of the community by vacant lots or anti-pedestrian uses like gas stations and car washes, housing a new library in a larger building could help reconnect it to the community. In our 2014 report, we highlighted ten sites—none of them historically significant—that we felt could benefit in these ways from mixed-use redevelopment of the library building. The Brooklyn Heights branch was one of these.

Of course, the city’s libraries—including BPL—need more public funding as well. We’ve testified to that end at multiple City Council hearings, and our reports have all specifically called on the de Blasio administration and the Council to increase operating and capital funding for the libraries.

But especially given the extent of the maintenance crisis facing the city’s branch libraries, it makes sense to look at other ways to modernize the city’s libraries. This proposal does that very nicely. I urge the members of this commission to support the proposal.

This testimony was presented on September 22, 2015.