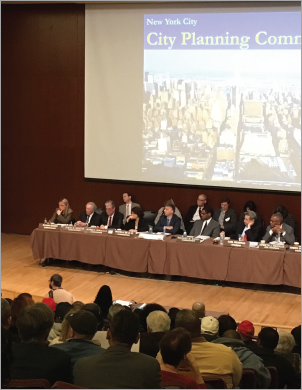 In testimony submitted before the City Planning Commission, CUF's Jonathan Bowles argues in favor of Mayor de Blasio's affordable housing zoning amendments, saying that the shortage of affordable housing is a threat to the city’s continued economic growth and a barrier to elevating low-income New Yorkers into the middle class.

Good afternoon. Chairman Weisbrod and members of the Commission, thank you for the opportunity to speak here today.

My name is Jonathan Bowles and I am the executive director of the Center for an Urban Future, an independent think tank that shines a light on the critical challenges and opportunities facing New York.

I don’t consider myself a housing expert.

But it’s abundantly clear to me that the shortage of affordable housing is one of the biggest threats to the city’s continued economic growth … one of the biggest barriers to elevating low-income New Yorkers to the ranks of the middle class … and one of the most serious challenges facing the city’s rapidly growing population of older adults.

To begin with, so many of the fastest growing sectors of the city’s economy – from the startup tech sector to creative fields like film and advertising – will find it exceedingly difficult to sustain their growth if the city fails to build more moderately-priced housing for the workforce.

Perhaps even more importantly, without a lot more affordable housing, the hundreds of thousands of New Yorkers who are working in low wage jobs will find it impossible to achieve economic mobility.

As it is, around 400,000 New Yorkers—1 in 10 working adults—have jobs that pay too little to rise above the poverty line. Sadly, this is likely to continue. Indeed, last week, the U.S. Bureau of Labor Statistics published its updated projections of occupations that will add the most jobs over the next decade. According to their analysis, of the 15 occupations expected to add the most jobs in the next decade, 11 have median annual wages under $32,000 a year. And eight of those occupations pay under $26,000 a year.

Given that simply having a job is no longer enough to ensure a decent life in New York, we need to be taking steps to make the city more affordable. We need more housing that working poor New Yorkers can afford.

Finally, without more affordable senior housing, we’re likely to see many more older adults slide into poverty. Already, 24 percent of the city’s immigrant seniors and 15 percent of the city’s native born seniors are living in poverty. But the number of older adults—and especially older immigrants, which account for 46 percent of all seniors in the city—is expected to grow significantly in the decades ahead. To plan for this growth, New York needs quite a bit more affordable senior housing.

The city’s proposed zoning text amendments—Mandatory Inclusionary Housing, and Zoning for Quality and Affordability—aren’t perfect. But they are worth supporting because they would make it significantly easier to develop the affordable housing that’s so necessary in New York today.

I urge you to support these two zoning text amendments.

This testimony was submitted on December 16, 2015 by CUF Chair Gifford Miller.