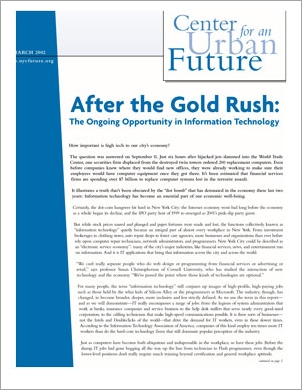 After the Gold Rush

No longer a specialty field, information technology has become an essential part of business growth in New York City. In this report, the Center tackles the question of how to connect jobseekers to a field that needs workers of all education and skill levels

Introduction: After the Gold Rush

How important is high tech to our city’s economy?

The question was answered on September 11. Just six hours after hijacked jets slammed into the World Trade Center, one securities firm displaced from the destroyed twin towers ordered 200 replacement computers. Even before companies knew where they would find new offices, they were already working to make sure their employees would have computer equipment once they got there. It’s been estimated that financial services firms are spending over $7 billion to replace computer systems lost in the terrorist assault.

It illustrates a home truth that’s been obscured by the “dot bomb” that has detonated in the economy these last two years: IT has become an essential part of our economic well-being.

Certainly, the dot-com hangover hit hard in New York City: Long before the rest of the economy soured, the Internet economy tanked, and the IPO party host of 1999 re-emerged as 2001’s pink-slip party guest.

But while stock prices soared and plunged and paper fortunes were made and lost, the functions collectively known as “information technology” quietly became an integral part of almost every workplace in New York. From investment brokerages to clothing stores, auto repair shops to foster care agencies, more businesses and organizations than ever before rely upon computer repair technicians, network administrators, and programmers. New York City could be described as an “electronic service economy”: many of the city’s major industries, like financial services, news, and entertainment run on information. And it is IT applications that bring that information across the city and across the world.

“We can’t really separate people who do web design or programming from financial services or advertising or retail,” says professor Susan Christopherson of Cornell University, who has studied the interaction of new technology and the economy. “We’ve passed the point where those kinds of technologies are optional.”

For many people, the term “information technology” still conjures up images of high-profile, high-paying jobs such as those held by the whiz kids of Silicon Alley or the programmers at Microsoft. The industry, though, has changed, to become broader, deeper, more inclusive and less strictly defined. As we use the term in this report—and as we will demonstrate—IT really encompasses a range of jobs: from the legions of system administrators that work at banks, insurance companies and service business to the help desk staffers that serve nearly every good-sized corporation, to the cabling technicians that make high-speed communications possible. It is these sorts of businesses—not the Intels and Doubleclicks of the world—that drive the demand for IT workers, even in these slower times. According to the Information Technology Association of America, companies of this kind employ ten times more IT workers than do the hard-core technology firms that still dominate popular perception of the industry.

Just as computers have become both ubiquitous and indispensable in the workplace, so have these jobs. Before the slump, IT jobs had gone begging all the way up the line from technician to Flash programmer, even though the lower-level positions don’t really require much training beyond certification and general workplace aptitude.

The need for trained IT professionals has certainly softened in the last 12 to 18 months. But industry observers say the slowdown is temporary. New York City’s banks, major retail stores and nonprofits also require IT, and once the economy recovers, their needs will only grow. The current downturn will delay the surge in employment—not destroy it. Most experts agree that by 2003, IT employment will see consistent growth again.

IT certainly wasn’t the only field that enjoyed dramatic job growth during the strong economy of the 1990s, nor is it the lone area of work expected to pick up again after the current recession fades away. But unlike positions in retail, food service, and tourism and hospitality—all of which saw tremendous employment gains during the last expansion—IT jobs are good jobs. Almost without exception, they pay wages and salaries above the poverty level. And unlike many low-level jobs, they usually offer opportunities for advancement.

A city that supports IT training and job placement addresses two vital needs. It sustains a wide range of businesses by helping them maximize efficiency and competitive muscle. It also blazes a trail to self-sufficiency for thousands of individuals struggling to escape from marginal work, poverty and dependence. For New York City in 2002, facing the dual concerns of a nervous business community and a projected rise in poverty, it’s a golden opportunity.

In two short decades, IT has become a major part of New York City’s present economic landscape—and a key to its future growth and development. The federal Bureau of Labor Statistics projects that “computer and data processing services” will be the fastest growing industry in the U.S. through 2008. Much of that growth will probably happen right here in the city: the Citizens Budget Commission, a nonpartisan group concerned with fiscal policy and spending priorities, has found that the New York City area already has the biggest communications and computer services workforce of any U.S. city. In April 2001, the New York state Workforce Investment Board, an advisory group of officials from the business community and the public sector charged with guiding state job training policy, projected that state employers will fill an average of over 49,000 high tech jobs annually over the next few years, including over 18,000 newly created openings each year. Those jobs, according to the board’s analysis, are likely to be concentrated in the information-intensive economy of New York City.

Among the city’s un- and underemployed are thousands who could fill these positions, as successful training programs across the country, including a few here in New York, have shown. “With the IT industry, after a short period of training you can move someone from low-income into the middle class, making $18-25 an hour,” explains consultant Caz Pereira, who has been involved in technology training efforts in New York and California. “The job opportunities are good, and the salaries are high.”

But this promise has not been realized. Much of the lower-level IT job training in the city suffers from a lack of coordination among training providers. Programs largely fail to address what employers want and need. The slow pace of change and general absence of accountability among college-based undergraduate and continuing-education programs have made those programs less useful to students and businesses alike. Further, the publicly funded job training system has all but abdicated the field when it comes to IT training (see “Train in Vain?”, p. 7). Employers bear some responsibility as well; even as they complain about the lack of talent, few take on interns or partner with schools or nonprofits for customized training. Only the city’s for-profit proprietary schools have made some effort to train students for the jobs the market demands (see “Getting Their Props”, p. 12).

Now, as the sector faces its first major downturn, other disconnects have become more obvious. As the pace of hiring slows, newly certified trainees must compete for jobs against better-educated and experienced IT workers who have been laid off. Hundreds who might have landed high-paying positions two years ago now struggle to find any work at all. Clearly, there is a need for coordinated internships and well-defined avenues leading from training to employment.

Fortunately, new efforts are reaching across the field, bringing cohesion and coordination to the system. The New York IT Career Ladders Consortium, a partnership designed by the Workforce Strategy Center that includes the New York Software Industry Association, the City University of New York, NPower New York, and the Federal Reserve Bank of New York, is currently assembling a network that embraces private industry, job trainers, community colleges, and government. The consortium has two goals: filling every possible job opening with a qualified candidate, and placing every qualified jobseeker in a career-track position paying decent wages.

The consortium’s arrival seems well-timed; even as technology has continued its yearlong slowdown, the rest of the economy now is in as bad or worse shape. With this in mind, the organizers are hopeful that City Hall’s new occupants will prove friendly. Under Mayor Rudolph Giuliani, the city helped IT companies with their physical needs, supporting an IT incubator at 55 Broad Street and wiring downtown office buildings for high-speed communications. But unlike in San Francisco and Chicago, local government here hasn’t made the effort to ensure that New York City cultivates the skilled IT workforce that could help keep a range of businesses viable—and on the city tax rolls—in 10 or 20 years. Now advocates hope that new mayor Michael Bloomberg, who made a fortune in communications and technology, will recast city policy to provide much greater support for training in the field.

In these cash-strapped days, that will be no small task. But the commitment is essential for the city’s future. As the world capital of finance and media, with unparalleled universities and research institutes and extraordinary cultural assets, New York City remains the country’s best hope to lead the 21st century economy. But that advantage isn’t guaranteed. We must act to preserve it now.