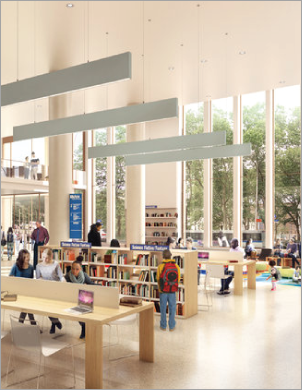 In testimony before Brooklyn Borough President Eric Adams, CUF Researcher Jeanette Estima makes the case for redeveloping the Brooklyn Heights branch library. Not only will a new library better serve the neighborhood, it will also help address decades of deferred maintenance in branches throughout Brooklyn.

Thank you, Borough President Adams and Deputy Borough President Reyna for the opportunity to speak here today. My name is Jeanette Estima and I am a research associate at the Center for an Urban Future, an independent policy organization that publishes studies on how to grow and diversify New York’s economy and expand economic opportunity across the city.

The Center has spent over three years studying New York’s libraries and their role as critical educational and community assets. Libraries serve as a gathering space for isolated seniors, a place for new Americans to learn English, and a free resource for anyone looking to upgrade their skills in this knowledge-based economy. But New York can’t fulfill the promise of its branch libraries under the weight of their severe infrastructure needs.

Across the city, many buildings have faulty ventilation systems and elevators that constantly break down; roofs are leaking over books and into playrooms, and many are simply too small to accommodate the high demand for after-school programs, computers and quiet spaces to work.

Brooklyn’s branches are especially struggling. Their average age is 65, and 51 branches have at least $1 million in state of good repair needs—that’s 86 percent of the borough’s libraries.

The Brooklyn Heights branch has $9 million in capital needs—for a new HVAC system, boiler, elevator, and roof, among other things. And while the building is over 60,000 sqft, much of this is below grade and used for archival storage. The reality is that two libraries, the neighborhood branch and the Business and Career Library, are housed in one building and only 28,000 sqft is open to the public.

So, this redevelopment proposal will help Brooklyn Public Library meet two critical goals: to create a bigger, more modern branch that better serves the Brooklyn Heights community; and to help address decades of deferred maintenance at branches across the borough.

At 21,000 sqft, the new Brooklyn Heights library would be bigger than 92 percent of the branches in the entire city. In Brooklyn, only six other branches would have more space. Because the branch will be built according to modern standards and needs, about 90 percent of the building will be usable, public space. The Business and Career Library will move to the central branch, where patrons can take advantage of complementary spaces and programs, such as the Workforce One center and the Information Commons.

This sale will also raise $40 million that will be invested in other branches, putting a major dent in the system’s $300 million in capital needs. In Brooklyn, 19 branches need boiler repairs or replacements, 25 have leaky roofs, and 30 need interior renovations to open up their small, inefficient layouts for greater public use. While in the past funding for projects has been piecemeal, requiring Brooklyn Public Library to be reactive in response to infrastructure needs, this influx of cash would allow them to strategically plan repairs and renovations according to their highest needs.

This redevelopment project is a smart move for the city that will ultimately create better libraries that can truly support the lifelong learning needs of thousands of Brooklyn residents.