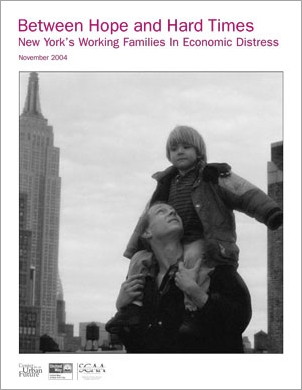 Between Hope and Hard Times

In this first-of-its-kind report, the Center and the Schuyler Center for Analysis and Advocacy explore the conditions and policy responses to low-income working families in the Empire State.

If the American Dream can be said to have a home, it’s New York. The rich history of the state stretches from revolutionary times through the tremendous economic expansion of the Erie Canal to the construction of audacious skyscrapers and the greatest wealth-generating apparatus the world has ever seen. For Irish families fleeing the potato famine of the 1840s, for African- Americans trekking north during the Great Migration of the 20th century, and for immigrants today arriving from all corners of the globe, New York has always embodied American aspirations for a better life.

Opportunity beckoned in New York. If the streets weren’t paved with gold, at least there were jobs that offered a foothold on that American Dream. For untold millions of working class New Yorkers, hard work, responsible living and the sustained commitment to a better future provided the education and savings to move their families into the great American middle class and beyond.

Today, many jobs that once could support a family barely suffice to keep that family out of poverty. The implied bargain America offers its citizens is supposed to be that anyone who works hard and plays by the rules can support his or her family and move onward and upward. But for millions of New Yorkers, that bargain is out of reach; the uphill climb faced by earlier generations has become a sheer vertical wall.

The numbers are surprising and a little overwhelming. More than 500,000 working families in New York—or one out of four—are low-income, even though at least one member has a job (see “Definitions Used In This Report” for statistical definitions of these terms). Worse, the trend is running strongly in the wrong direction. During the economic boom of the 1990s, the number of low-income households statewide increased by 2.7 percent. Nationwide, during that same period, it fell 1.3 percent. In other words, New York was adding to its number of low-income families at twice the rate the rest of the country was improving. One reason: Median hourly wages for workers at the low end of the income spectrum grew much more slowly in New York (2.3 percent) during the strong economy of 1995-2000 than they did nationally (11.9 percent).

How did this happen? The economic changes that are rolling across America, in particular the steady erosion of low- skilled but relatively well-paying jobs in manufacturing, provide part of the explanation. Another is welfare reform: In New York, welfare caseloads declined by a remarkable 63 percent between 1995 and November 2002—-a drop of more than 1 million individuals. Most of these former welfare recipients have joined the workforce but still lack a clear path out of low-wage jobs, leaving them far from self-sufficiency. Furthermore, the infusion of all these individuals into the labor market increased downward pressure on low-skill wages.A high cost of living (particularly in New York City), growing health care costs, the state’s large immigrant population--all of these also contribute to the rise in the number of working poor in New York.

Clearly, New York State has issues around work and poverty. The next question seems obvious: What are we doing about it? In the bulk of this report, we look at how well (or poorly) New York does at providing education and training, economic development and work supports to low-income families. A few overarching points stand out:

1) Policies and programs to assist low-income working families in New York State are a mixed bag. Some of New York’s policies are among the best in the nation; others work but need to be sharpened--still others are, frankly, a mess. For policymakers, the challenge is to improve the laggards while protecting the winners. In this report, we try to provide a clear-eyed view of which programs work and which need work, along with appropriate recommendations for each.

2) New York State must do more to help low-income workers not just get by, but get ahead. The state is a national leader in supports, such as a generous state Earned Income Tax Credit, childcare, Medicaid and other key services for struggling families. But we are lagging in programs that offer low-wage workers opportunities to move into better careers. For a state that seeks to build its economy on a foundation of high-skill, high-wage industries, losing this chance to build our human capital is a major policy misstep.

3) Conditions are changing faster than state policies. Things move fast these days, and nowhere is that more true than New York, where seismic shifts have occurred (and continue) in bedrock economic factors such as primary economic sectors, necessary workplace skills and immigration patterns. Too often, New York’s policymaking apparatus has not kept pace. Decisions must be made more quickly, in a more coordinated manner and with more thought to current and likely future conditions.

4) For many policies, the state does not gather the information necessary to make the best decisions. New York State simply does not collect and analyze the data it needs to know what works and what does not for policies as varied as the education options provided to welfare recipients, the efficiency of key economic development programs and the cost effectiveness of federally supported job training vouchers.

At the heart of this report, under all the facts, figures and policy analysis is a consistent theme: New York needs to prioritize the issue of the working poor and it needs to do so in a new way. New York currently focuses on
“making work pay” by providing subsidized supports such as food stamps and tax breaks to low-income workers. State officials deserve credit for these choices, and we want to be clear that these policies are desperately needed by low-income New Yorkers and must be continued and in many cases improved. (In Chapter Four, we present a deeper analysis of what these programs offer and how they perform.)

But this approach can only go so far, and the numbers show that New York State is at or very near the ceiling of how much assistance these supports can provide. Tens of thousands of poor New Yorkers remain without subsidized childcare or medical insurance, but the cost of large-scale expansion would run to billions of dollars. Funding from Washington for programs to assist low-income working families will likely remain flat or even decline, and New York faces its own severe budget constraints. Other programs don’t require state funding, but are also near their capacity to make a difference. Collections for child support, for example, are already among the best in the country.

With one out of four working families in New York living at or below the margin of self-sufficiency, something has to change. Clearly, the state will never be able to fill the gap between low-wage work and poverty for all New Yorkers under current conditions. The answer is to continue to provide as much relief as possible while reducing the number of New Yorkers who need such assistance. The state must refocus the programs that help lift working New Yorkers into better paying jobs--education, training and economic development--to help low-income working families. Over the long haul, the payoff is tremendous: Every family that moves out of poverty is a family that no longer costs the state money for Medicaid, childcare, tax breaks and other income supports.

Considering the tight budgetary times at the federal, state and local level, wherever possible throughout this report we have tried to make recommendations that require little or no new funding. The ideas we put forth rest largely on a tighter focus on measurable outcomes, smarter planning, more efficient expenditures and/or improved allocations, and far better coordination between all the disparate programs designed to serve low-income New Yorkers. At times, we do call for increased spending, saving these recommendations for policies that are either proven to be investments well worth the expenditure or a need that is so acute and the current solution so inadequate that cost-neutral charges simply won’t do the job.

One of the largely hidden benefits of welfare reform in the mid-1990s was that it finally helped demolish the pernicious myth of the “parasitic poor.” As millions of single mothers and others joined the workforce, a more accurate image emerged: ambitious, hard-working Americans who wanted to join the mainstream of working life and feel the pride of caring for themselves and their families. In a sense, welfare reform issued the same challenge as always to the worst-off in our society: Make the often-arduous efforts to improve yourselves and it will pay dividends. If we as a society fail to live up to our end of that bargain, we let down not only those millions fighting every day to improve their own lives, but our own shared faith that such efforts should be rewarded.

The Cost of Making Ends Meet,

Many Face Tough Times in New York
The Post-Standard (Syracuse)

Many Face Tough Times in New York
The Post-Standard (Syracuse)