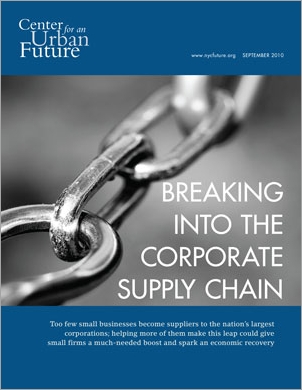 Breaking into the Corporate Supply Chain

This new report reveals that strikingly few small businesses become suppliers to the nation's largest corporations but argues that helping more of them make this leap could give small firms a much-needed boost and help spark an economic recovery.

With so many Americans now unemployed and the economy still struggling to get into second gear, the country badly needs small businesses to work their magic. Small businesses created roughly two thirds of all new jobs in the United States over the past 15 years, but they are also the nation’s turnaround specialists: Small firms almost single handedly sparked the economic recovery during the nation’s two previous recessions. For instance, coming out of the 2001 downturn, firms with fewer than 20 employees created loads of new jobs while companies with 500 or more employees continued to shed them.

But this time, small firms are struggling, too.

President Obama and Congress have tried to aid small businesses through a number of initiatives, from efforts to open up the credit markets to providing tax credits to firms that hire the unemployed.  These efforts undoubtedly help, but surveys of small firms suggest that what they need most today are customers. In fact, when asked for the biggest reason for their firms’ woes in a recent survey by the National Federation of Independent Businesses, reduced sales was cited by seven times more small businesses than those that mentioned tight credit.

If new sales are what small firms need, then corporate supply chains are an obvious place to look. Though this promising opportunity has gone largely unexamined by policy experts and government officials, we find that becoming a corporate supplier provides small firms with a measure of financial stability and valuable new revenues that often enable them to hire new employees, undertake a marketing campaign, add new equipment or pay down the debt. It also opens doors to additional supplier opportunities, which can catapult their business to another level. Moreover, accessing capital from banks becomes far easier for those small firms that have a large corporation for a customer.

Indeed, as we show in this report, breaking into the supply chain of a large corporation can be transformative for small businesses. “You can make a quantum leap,” says Ira Davidson, director of the Pace University Small Business Development Center in lower Manhattan “The upside potential is tremendous.”

“It really took us to a different level,” adds Garry Castro, president and CEO of LogistiCorp, a Dallas-based supply chain management and logistics company that has grown significantly since landing Texas Instruments as its first corporate customer in 1998. Castro’s firm initially won a relatively small contract to provide a shuttle service between Texas Instruments’ corporate campus and Dallas-area rapid transit stations. But after performing well for a year-and-a-half, TI gave LogistiCorp a four-year contract for additional service worth $1.5 million a year—doubling the small firm’s revenue at the time. “We were able to get additional contracts, larger contracts. That provided us with additional infrastructure that allowed us to go to AT&T and provide supply chain management for them.”

Not every small business is ready to make the leap that LogistiCorp did. There are clear risks for small businesses that take on a corporate client without proper preparation. And for many, becoming a supplier to a very large corporation will never make economic sense. But there is little doubt that significantly more small businesses could be tapping into the supply chain of large corporations—and not only providing a valuable service but greatly enhancing their own business potential as a result..

While there are approximately six million businesses in the United States, a scant 10,500 suppliers received 80 percent of Fortune 500 spending in 2008, according to a report by CVM Solutions, a Chicago-based company that helps large corporations analyze their supply chains. Only 110,000 suppliers accounted for 95 percent of the total spend. Unfortunately, since then, the numbers have been falling. Jon Bovit, chief marketing officer at CVM Solutions, said that the number of small and minority- and women-owned businesses supplying a sample of Fortune 1000 companies plummeted by more than 25 percent between 2008 and 2009.

Other studies have come to similar conclusions. A 2009 survey of fast-growing businesses in urban areas by the Institute for a Competitive Inner City (ICIC) revealed that fewer than 25 percent of these firms counted large corporations or institutions as a primary customer base.

Sadly, “B-to-B” has too long been largely the province of Big Business to Big Business. “Too few small businesses become suppliers,” says Davidson.

Several other small business experts interviewed for this report agree with that assessment. “More small businesses could benefit,” says Molly Brogan, vice president of public affairs at the National Small Business Association. “But I think a lot of them are trying. [The corporate supply chain] is hard to break into.”

As we detail in this report, small businesses face a number of significant hurdles that make it difficult for them to become suppliers to large corporations.

Part of the problem is that, as corporations have become more global over the past 25 years, so have their supply chains. The procurement of goods and services has become more standardized and more systematized across sprawling enterprises, creating a preference for larger suppliers who can satisfy the needs of multi-national corporations at a global level in a “one-stop shopping” relationship.

While these global economic forces may be inexorable, our research shows that small firms have also been stymied by other more basic obstacles. For instance, several of the small business owners we interviewed noted that it is a challenge even to find the right people in corporations to pitch their products to, let alone to establish the kind of on-going relationships that allow for sales opportunities to develop. Countless small firms can’t access the growth capital they need to scale up their business to meet the supply chain needs of large corporations. And many promising small businesses are deterred from even trying because each corporate client insists on its own, often time-consuming application process.. “Corporations need to streamline the process and reduce the amount of paperwork,” says Brogan. “The easier you can make the process, the more small businesses you’ll have that are interested in doing it.”

Simplifying the application process would clearly benefit small businesses, but large corporations also stand to gain from expanding their supply chains to include more small firms. Smaller businesses generally have the advantage of being more nimble than larger companies, and in many cases they are better positioned to bring innovative solutions to the corporate customer. At the same time, as consumers have become more aware of the impact that corporations have on their communities, they have demanded that companies hire and do business with the people that are part of their local communities. “Large corporations want their supply chains to look like their customer base,” says Robert Handfield, a professor of supply chain management at North Carolina State University and the director of its Supply Chain Resource Cooperative.

Handfield says that diversifying a corporation’s supplier base is not just the “right thing to do,” but has become a key component of doing business. “Corporations increasingly recognize that growth in the economy is going to come from small business,” he says. “With a broader, deeper supply chain that represents the geographic and cultural diversity of its customer base, their suppliers are more likely to become their customers.”In the wake of the Great Recession, the nation’s policymakers have been struggling in an increasingly partisan atmosphere to identify and implement actions that will stimulate economic growth. Proposals to increase government spending on infrastructure and cut taxes for small business seem stalled, yet an alarming number of Americans remain out of work and each month’s national employment report continues to reflect either one step forward or one step back.

Policymakers have long tried to boost small businesses by helping them identify, bid on and win procurement contracts with the government. But while government purchasing is being leveraged to help small businesses grow, there have been hardly any efforts nationally or in New York—a hub of Fortune 500 companies—to increase the number of small firms that become suppliers to the nation’s largest corporations.

It is time to give this a shot. Major corporations in the United States spend hundreds of billions of dollars a year on suppliers, purchasing everything from software and office furniture to catering and graphic design services. This is an enormous potential market for small businesses. In fact, our research shows that breaking into the supply chain of a large company is often a springboard for growth. Most of the small firms we interviewed for this study have more than doubled their revenues and added a significant number of jobs in the time since first becoming a supplier to a large corporation.

However, this report also shows that strikingly few small firms are tapping into this opportunity. There are sound reasons why large firms tend to hire other large firms, but as we detail in the pages that follow, it is eminently possible to expand the number of small firms that become corporate suppliers. Doing so right now could provide a key spark. Indeed, even a minor increase in corporate spending towards small businesses would provide a much-needed boost to these traditional engines of growth and serve as a catalyst for economic recovery.


Corporations urged to give small businesses a hand

IBM, AT&T Create Website for Small Companies Seeking to Be Their Suppliers