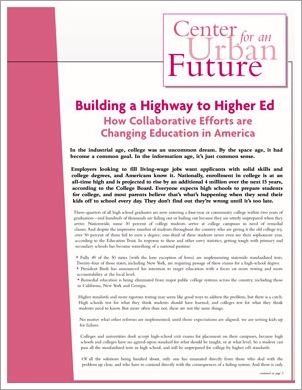 Building a Highway to Higher Ed

After decades of miscommunication between high schools and colleges, education advocates nationwide are taking heart in signs that collaboration and coordination are beginning to ease the transition to higher ed. Nowhere is this positive trend more pronounced than in New York City.

In the industrial age, college was an uncommon dream. By the space age, it had become a common goal. In the information age, it’s just common sense.

Employers looking to fill living-wage jobs want applicants with solid skills and college degrees, and Americans know it. Nationally, enrollment in college is at an
all-time high and is projected to rise by an additional 4 million over the next 15 years, according to the College Board. Everyone expects high schools to prepare students for college, and most parents believe that’s what’s happening when they send their kids off to school every day. They don’t find out they’re wrong until it’s too late.

Three-quarters of all high school graduates are now entering a four-year or community college within two years of graduation—and hundreds of thousands are failing out or bailing out because they are utterly unprepared when they arrive. Nationwide, some 30 percent of college students arrive at college campuses in need of remedial
classes. And despite the impressive number of students throughout the country who are giving it the old college try, over 50 percent of them fail to earn a degree; one-third of these students never even see their sophomore year, according to the Education Trust. In response to these and other sorry statistics, getting tough with primary and secondary schools has become something of a national pastime:

• Fully 49 of the 50 states (with the lone exception of Iowa) are implementing statewide standardized tests.
Twenty-four of those states, including New York, are requiring passage of these exams for a high-school degree.
• President Bush has announced his intention to target education with a focus on more testing and more accountability at the local level.
• Remedial education is being eliminated from major public college systems across the country, including those in California, New York and Georgia.

No matter what other reforms are implemented, until those expectations are aligned, we are setting kids up for failure.

Colleges and universities don’t accept high-school exit exams for placement on their campuses, because high schools and colleges have no agreed-upon standard for what should be taught, or at what level. So a student can pass all the standardized tests in high school, and still be unprepared for college by higher ed’s standards.

Of all the solutions being bandied about, only one has emanated directly from those who deal with the
problem up close, and who have to contend directly with the consequences of a failing system. And there is only one solution that tackles the issue of college preparedness head-on.

It is the collaboration between public schools and higher education, also known as P-16, which stands for “pre-kindergarten through 16th grade.” The model is aimed at removing obstacles in the education system that prevent students from progressing from one grade level to the next. P-16 is about creating a smooth pathway from pre-kindergarten or pre-school through college, and over the past five years it has become a national movement—one that is being spearheaded by the education community itself.

P-16 isn’t just about aligning standards and expectations. It’s about pooling the resources of both systems to pursue a common goal, which is to turn out better prepared, better
educated students. It’s an opportunity to open up the dialogue between colleges and the
primary and secondary schools, and to work together to improve teacher training, strengthen curricula and give students the information and support they need to succeed.

And where is some of the greatest progress being made? In that notorious bastion of didactic discord; New York City.

Over the past year, the fireworks that usually dominate educational policy and practice in New York have been replaced with something entirely new—friendship. Schools Chancellor Harold Levy and City University of New York Chancellor Matthew Goldstein have embraced one another like no two chancellors in the city’s history. Their shared sense of purpose and mutual admiration has transcended a thoroughly negative history between the two systems and all the usual bluster and ego. It has allowed them to collaborate on a series of programs built on a common vision, and a common goal.

A yearlong investigation of educational programs by the Center for an Urban Future reveals vast amounts of programming and resources being shared between New York City’s two public school systems. In fact, New York has begun to pioneer some of the most advanced and sophisticated P-16 programs in the United States. In a survey of major cities, the Center found that New York is leading all others in making public school and college collaboration a priority.

The accomplishments are numerous and still taking shape. They include:

• Expansion of the College Now program, which links City University of New York (CUNY) faculty and administrators to virtually every general high school in the city, in an effort to produce more high-school graduates and better prepare students for college.
• Hiring the first teacher education czar who reports to CUNY Chancellor Matthew Goldstein and will be responsible for coordinating and restructuring teacher training at CUNY, which turns out nearly 40 percent of the Board of Education’s teachers.
• Alignment of New York City’s English and math high school exit exams—the New York State Regents tests—with CUNY’s college placement exams, allowing students to avoid being double tested, and letting them know where they stand as they prepare to step up from 12th to 13th grade.
• Hiring the first joint deputy to the chancellors for collaborative programs, who has offices at both the Board of Ed and CUNY.

There is no question that the pressure for reform is intense in New York City: Businesses are demanding better trained graduates, the Regents exams are among the most rigorous standardized exit exams in the nation, remediation has been eliminated at the four-year CUNY colleges. But much of the progress here is directly attributable to the two chancellors rolling up their sleeves and working together. Without that synergy, the bridges they have begun to build could easily collapse, leaving the system right back where it started.

As of now, none of these programs is supported by much more than the sheer will of a few individuals, and if the history of the New York City education system has taught us one thing, it’s that those individuals are unlikely to keep their jobs forever. Given this and many other institutional and political obstacles, the real work in New York is finding a way to sustain any initiative long enough to actually see results.