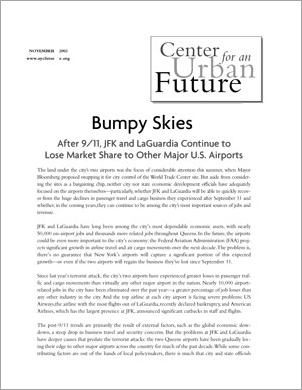 In this report on New York's air transport industry, the Center illustrates that JFK and LaGuardia fared worse than most U.S. airports in the year after September 11th and still face structural threats to future competitiveness.

The land under the city’s two airports was the focus of considerable attention this summer, when Mayor Bloomberg proposed swapping it for city control of the World Trade Center site. But aside from considering the sites as a bargaining chip, neither city nor state economic development officials have adequately focused on the airports themselves—particularly, whether JFK and LaGuardia will be able to quickly recover from the huge declines in passenger travel and cargo business they experienced after September 11 and whether, in the coming years, they can continue to be among the city’s most important sources of jobs and revenue.

JFK and LaGuardia have long been among the city’s most dependable economic assets, with nearly 50,000 on-airport jobs and thousands more related jobs throughout Queens. In the future, the airports could be even more important to the city’s economy: the Federal Aviation Administration (FAA) projects significant growth in airline travel and air cargo movements over the next decade. The problem is, there’s no guarantee that New York’s airports will capture a significant portion of this expected growth—or even if the two airports will regain the business they’ve lost since September 11.

Since last year’s terrorist attack, the city’s two airports have experienced greater losses in passenger traffic and cargo movements than virtually any other major airport in the nation. Nearly 10,000 airport-related jobs in the city have been eliminated over the past year—more than any other industry in the city. And the top airline at each city airport is facing severe problems: US Airways, the airline with the most flights out of LaGuardia, recently declared bankruptcy, and American Airlines, which has the largest presence at JFK, announced significant cutbacks in staff and flights.

The post-9/11 trends are primarily the result of external factors, such as the global economic slowdown, a steep drop in business travel and security concerns. But the problems at JFK and LaGuardia have deeper causes that predate the terrorist attacks: the two Queens airports have been gradually losing their edge to other major airports across the country for much of the past decade. While some contributing factors are out of the hands of local policymakers, there is much that city and state officials can do to help stabilize and improve this important sector.

Despite the great importance of the aviation sector to the city’s economy, there is virtually no research being done analyzing short-term and long-term trends—in passenger airline and air cargo business at New York’s airports. The Center for an Urban Future has tried to fill this void. This report details how passenger travel and air cargo business at JFK and LaGuardia have fared since September 11, compared to other major American airports, and documents how many jobs in this sector have been lost as a result of the terrorist attacks. Following-up from the Center’s 2000 report “On a Wing and a Prayer: Highway Gridlock, Antiquated Cargo Facilities Keep New York’s Airports Grounded,” this report also provides updated data comparing growth rates at JFK and LaGuardia with other major airports over the past 10 years. The results show some cause for concern:

These developments shouldn’t be taken lightly. JFK and LaGuardia have long served as two of the city’s most critical sources of jobs and revenues. And the airports help provide diversity to the city’s Wall Street-dominated economy—a balance that has become increasingly important in the aftermath of 9/11.

While there are now slightly under 50,000 jobs in the city’s “air transportation” sector, there are many additional jobs at and around JFK and LaGuardia in occupations tied to the airports—including warehouse workers, truck drivers, freight forwarders, parking attendants, limo drivers, and government workers. (The FAA alone has 500 employees at its regional office on Rockaway Boulevard, just across the street from JFK.) A 1995 economic analysis of the New York’s aviation industry by the Port Authority found that JFK had 76,600 on-airport jobs and 59,660 off-airport jobs while LaGuardia had 17,330 on-airport jobs and another 13,610 off-airport.

“The job losses are much bigger than we initially thought they would be,” says Marie Nahikian, executive director of the Queens County Economic Development Corporation. “And what happens at the airports has a huge impact on the Queens economy.”

Nahikian notes that the steep drop in business at the airports has had repercussions throughout Queens. For example, Sky Chefs, an airplane catering firm based in the Rockaways, which has the highest unemployment levels in the borough, has laid off half of its workforce since 9/11. “It’s crucial that we nurture this industry,” she says.

Despite all of this, Nahikian says that none of the federal or state programs that seek to provide benefits to businesses and workers impacted by September 11 have addressed any of the problems at the airports.

It’s easy to take the airports contribution to the city’s economy for granted. After all, any city with 8 million residents, hundreds of international corporations and a thriving tourism trade should provide a steady stream of airline passengers—and a large market for air cargo shipments—well into the future.

But in today’s global economy, the city’s airports—JFK in particular—have more competition than ever before. A generation ago, JFK was one of the only hubs for international airline travel on the East Coast. Passengers from other parts of the country heading to Europe and other foreign destinations often had to go through Kennedy, which had a stranglehold on international flights originating from the East Coast. By the same token, most of the overseas freight that was destined for, or being shipped from, locations along the Eastern U.S. also had to go through JFK—primarily because most cargo is shipped in the bellies of passenger aircraft. Today, passengers and freight clients have more options than ever before. Thanks to technological advances that allow smaller aircraft to fly longer distances, airports in Boston, Philadelphia, Pittsburgh, Washington, Baltimore, Charlotte, Atlanta and even Cincinnati now offer daily flights to international destinations. And on the cargo side, freight can just as easily be flown into Miami, Chicago, Atlanta and Newark and taken by truck to destinations up and down the East Coast.

In addition, some of the stiffest competition for JFK and LaGuardia has come from nearby Newark International Airport, which has grown over the past 15 years from a minor airport to a hub that now handles more passengers than either of the Queens airports. Its proximity to a national highway network and the region’s largest port has also helped it steal significant cargo business from Kennedy.

To a significant extent, the declining fortunes of JFK and LaGuardia have been beyond the control of airport managers and local economic development officials. LaGuardia, located on a relatively small piece of land and with virtually no room to expand, has simply hit a ceiling on the number of flights and passengers it can handle—while other airports have had room to grow. JFK, which is substantially larger than LaGuardia and still has some room for expansion, has been hurt by changes in the airline industry that have made it possible for travelers to fly overseas (and allow businesses to ship cargo overseas) without going through New York.

Beyond these structural factors, however, inaction and inattention by local government officials has significantly contributed to the airports’ problems in several key areas. While the Port Authority of New York and New Jersey, the bi-state agency that manages the airports, has contributed to key improvements within the airports themselves, the Giuliani and Pataki administrations long neglected related issues of arguably even greater importance to re-establishing JFK and LaGuardia as vibrant engines of economic growth.

The Port Authority, which is essentially responsible for improvements inside the boundaries of the airports, has overseen an expansion of LaGuardia’s main terminal and an infrastructure modernization program at JFK in which airlines have committed more than $6.5 billion to redevelop passenger terminals and build new freight warehouses. It has also used nearly $4 billion in federal grants and its own funds to improve the on-airport road system, build new parking garages and develop AirTrain, a much-needed rail system that will connect passenger terminals at JFK with the Long Island Rail Road station in Jamaica.

The city’s Economic Development Corporation (EDC), through the use of industrial development bonds, has helped finance private sector investments in new terminals and cargo facilities at Kennedy. It also made available a 28-acre site owned by the city just outside the borders of JFK for a four-building, 170,000 square foot air cargo warehouse complex—a project that is now underway.

Unfortunately, however, the public sector in New York has neglected to adequately address other crucial issues facing the aviation sector, including the single most critical obstacle to the industry’s long-term sustainability in Queens: access to the airports. In fact, despite their economic importance, the two Queens airports and the city’s aviation industry has long been only a minor part of the city’s economic development strategy.