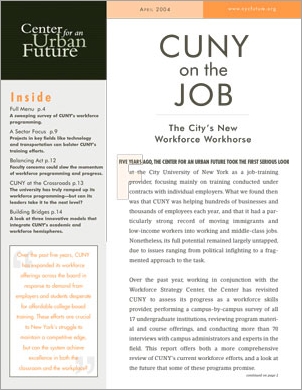 CUNY on the Job

This new report--an update to CUF's 1999 study, "Putting CUNY to Work"--finds that workforce development has become a priority at CUNY, with sharp increases in enrollment for employer contract training, adult education and other training programs.

This is an excerpt. To read the full report, click here (PDF).

Five years ago, the Center for an Urban Future took the first serious look at the City University of New York as a job-training provider, focusing mainly on training conducted under contracts with individual employers. What we found then was that CUNY was helping hundreds of businesses and thousands of employees each year, and that it had a particularly strong record of moving immigrants and low-income workers into working and middle-class jobs. Nonetheless, its full potential remained largely untapped, due to issues ranging from political infighting to a fragmented approach to the task.

Over the past year, working in conjunction with the Workforce Strategy Center, the Center has revisited CUNY to assess its progress as a workforce skills provider, performing a campus-by-campus survey of all 17 undergraduate institutions, reviewing program material and course offerings, and conducting more than 70 interviews with campus administrators and experts in the field. This report offers both a more comprehensive review of CUNY’s current workforce efforts, and a look at the future that some of these programs promise.

Much has changed since we last evaluated CUNY five years ago. Back then both the system overall and many of the individual campuses lacked stable leadership, and a task force appointed by Mayor Giuliani labeled the university an ”institution adrift.” When we looked at CUNY’s workforce programs in 1999, we were pleased to find some outstanding efforts, through which the system was achieving such diverse goals as putting welfare recipients into high-paying jobs, and providing employers such as Bear Stearns and the New York Stock Exchange with high-quality training for their employees. These efforts, however, were relatively modest. Over the past five years, workforce development has become a major part of CUNY’s work with the number of programs and people served dramatically increasing.

Last year, enrollment hit 238,379 in all continuing education categories. This was a 30 percent rise since 1998, now accounting for roughly half of all the university’s enrollments. This report drilled down into three major categories and found across-the-board increases in all of them: adult education enrollments reached 140,697, also up 30 percent from just five years ago; another 23,780 workers received skills training through direct contracts with local employers, a 60 percent rise; and CUNY provided welfare-to-work services to nearly 40,000 public assistance recipients over the past four years.

At its heart, however, the growth is due to demand.

More and more businesses and government agencies throughout the country are turning to higher education to meet their workforce training needs, and New York is no exception. One reason for this shift is that the colleges and universities that have entered the job-training market tend to offer high-quality programs at competitive prices. But people are also making the switch because higher education can help workers attain the one credential other training providers cannot: a college degree. Even President Bush seems to have recognized that in a knowledge economy, a college education is the best job training of all: In his January 2004 State of the Union Address, he announced “Jobs for the 21st Century,” a major workforce initiative that focuses on expanding access to higher education and job training, and which includes $250 million to fund partnerships between community colleges and employers in key sectors.

In New York, individual government agencies see CUNY as a significant workforce resource, and corporate clients have begun to follow. But thus far CUNY’s big-picture potential as a booster of the region’s skill base and a powerful economic development resource is largely unrealized. For example, the Bear Stearns training program mentioned above was arranged for by the city ’s Economic Development Corporation in 1992 as part of a $12 million tax-exemption deal to keep the securities giant in New York. The deal charged CUNY’s New York City College of Technology with training and recruiting entry-level workers for Bear Stearns’ Metro Tech office in Brooklyn, and 12 years later, the company continues to rely on City Tech to train quality staff. But despite Bear Stearns’ obvious satisfaction with CUNY ’s work, the EDC has yet to return to higher education for workforce services since it struck that deal.

The goals of this report are both to quantify and describe the growth in workforce programming at CUNY, and to examine the interplay between CUNY’s roles as a training provider and an institution of higher education. The first part of the report offers the hard numbers, and an overview of some of the kinds of programs being offered. But this report is no mere academic exercise: Over the past five years, CUNY has become a real force in job training, and its power is this area is likely to continue to grow. The quality of its services will increasingly help determine the quality of New York’s workforce; the choices it makes over the coming years will affect hundreds of thousands of individuals, as well as the economy overall. The second part of the report looks toward that future, highlighting initiatives we believe suggest the university’s true promise in this area: As a provider of high-quality, market-conscious workforce programs that are linked to traditional education, and that are offered on a continuum designed to help individuals reach their full potential, as well as to provide businesses with employees who have the skills they need to succeed.

The story of the City University’s turnaround is well-known in New York. Higher standards and strong leadership have done much to elevate both the university’s profile and its stature in the region. But less attention has been paid to the university’s role in workforce development—a function that has become a major part of CUNY’s activity in recent years. The Center for an Urban Future has worked in association with the Work force Strategy Center over the past year to conduct a sweeping survey of employment and training programs at CU NY, up dating and expanding upon the Center’s 1999 ”Putting CU NY to Work” report on work force initiatives at the university. This review encompasses a campus-by-campus assessment of training programs and includes some of the most comprehensive numbers ever presented on the subject, as well as an analysis of the nature and influence of the system ’s work force activity.

Some of our specific findings are highlighted below:

A SURVEY OF WORKFORCE PROGRAMSThis study focused on professional studies and workforce programs. All of this activity is housed under the heading of continuing education at CUNY, which accounted for 238,379 enrollments last year, about half of all students attending the university. Three major categories of workforce programming were assessed in this review—adult education courses; employment and welfare-to-work programs; and business contract training—all of which experienced sharp growth in the past five years.
Adult Education Courses are defined in this report as non-credit classes that the general public can take directly from course catalogues, without enrolling in a traditional degree program.

LINKING WORKFORCE PROGRAMS WITH ACADEMICS AND CREATING CAREER LADDERS
Overall, workforce programming has mushroomed at CUNY over the past five years; the system now serves nearly a quarter of a million people through programs geared toward working adults and through business and government training contracts. However, the university’s training activities are rarely linked to its traditional academic programs, or focused on helping individuals move up a long-term career ladder. A major issue was faculty concern: 16 of the 17 campuses cited poor faculty support as the reason they have not made stronger links between workforce and academic programs.

This report profiles three new initiatives that are successfully beginning to make such connections. They are: