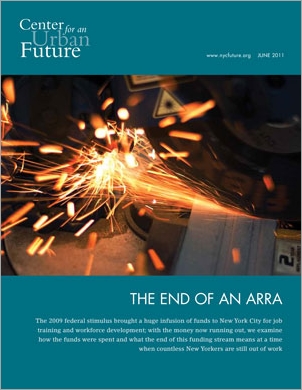 End of an ARRA

The 2009 federal stimulus brought a huge infusion of funds to New York City for job training and workforce development, but the money is now running out. This report looks at how the funds were spent and what the end of this funding stream means at a time when countless New Yorkers are still out of work.

In the winter of 2009, with more than 1.4 million job losses in the first two months of the year, the federal government passed the American Recovery and Reinvestment Act (ARRA) into law as a way to quickly inject liquidity into a stalling economy and maintain critical services that would allow individuals and communities to survive through the recession. At first glance, New York City made out pretty well. More than $7 billion in Recovery Act funds went to programs benefitting New York City residents, which was more than many entire states received. These funds went toward failing schools, community development block grants, building retrofits and a much needed temporary increase in the federal match for Medicaid, among many other things.

The most important way of assessing these investments has always been in terms of the jobs saved and people helped, but from the beginning it was also hoped that Recovery Act investments would provide a unique opportunity for policy innovation and reform. In no policy area was this truer than in workforce development. And in no other city would the payoff and potential pitfalls be clearer than in New York, the country’s largest workforce development system.

However, all that money also came with strings attached: First, the funds had to get out the door and into the economy as fast as possible; the programs were supposed to be, as the Obama administration put it, “shovel ready.” Second, all ARRA funds had to be spent by June 2011, after which the city’s regularly scheduled funding streams would resume at pre-stimulus levels. In other words, in order to receive ARRA funds, workforce programs had to be either already up-and-running or far enough along in the development process to begin implementation almost immediately, and they had to be flexible enough to absorb a lot of additional funds over a short period and then shrink back down again.

To determine ARRA’s impact on New York City’s workforce development system, our team of researchers reviewed municipal budgets and performance data and interviewed more than 40 city officials, representatives from community organizations, advocates and other experts on the workforce development system and its programs. Despite federal and city efforts to provide transparency in the distribution of the Recovery Act funds, tracing funding in this complex and multifaceted system was a challenge. This is the first overview of not only where the dollars were spent, but how well they were spent and what their lasting impacts are likely to be.

We found that Recovery Act dollars specifically for workforce development in New York City funded about 3,000 job placements, trained 6,500 individuals, provided internships for 3,000 students, and paid for 27,900 teens and young adults to have a summer job. Three programs—Individual Training Grants, contracts with community-based organizations, and the city’s Summer Youth Employment Program—received about two-thirds of the $63 million in additional WIA funds, though more than a dozen other programs received support as well.

ARRA’s huge injection of funds also led to some significant policy innovation. The Department of Small Business Services, for example, used Recovery Act funds to roll out or resume several ideas and partnerships that had been held back by recent budget cuts, including a new Workforce1 Career Center that was specifically focused on the health care sector, new courses with support services for health care training, and new programs that helped jobseekers with more experience and those who are working to advance in their careers. In addition, many of these ARRA funded programs moved the system toward more collaboration. City agencies like the Fire Department and the Department of Cultural Affairs were connected to job training programs, and SBS deepened its relationships with the Department of Education, the City University of New York (CUNY) and other agencies, as well as with a loose network of community-based organizations.

Considering the economic environment of the past two years, those are some very solid accomplishments. However, it is also true that many of these new programs and initiatives could have been implemented even sooner had the federal government not cut back dramatically on workforce development funding in the years preceding the Great Recession. In fiscal year 2002, for example, the city’s share of federal WIA funds totaled $142.5 million. By 2009, before ARRA funds were made available, that number had been reduced to $68.4 million, a 52 percent decrease in only seven years. In 2011, the Individual Training Grants program, which issues vouchers to qualifying jobseekers, had a total budget of $12.7 million. That was significantly smaller than it was in 2006, even with ARRA funds added.

In some cases, Recovery Act funds also made it possible for the city to cut back on its own investments in workforce development programs, which had been increasing over the last few years in order to make up for federal and state cuts. In 2010, for example, ARRA funds allowed the city to cut $15 million of its own funding for the Summer Youth Employment Program, which no doubt helped the overall budget in a time of great fiscal strain but also canceled out some of ARRA’s effect. 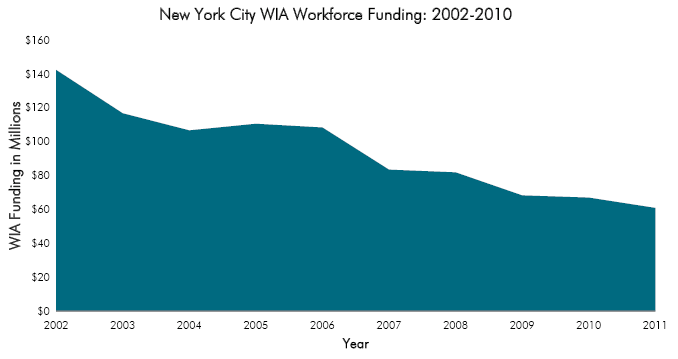 Moreover, because of the time constraints, the vast majority of the new funds went to programs that were already well-established and able to absorb a short-lived spike in funding. The Summer Youth Employment Program (SYEP), for example, which matches 14-to-24 year-olds with summer jobs in a variety of public and private organizations, received more than $18 million in WIA funds and $23 million in Community Service Block Grants. Those funds made it possible for the program’s enrollment to balloon from 43,113 in 2008 to 52,255 in 2009, a huge boon to thousands of families. But it was also a one-time benefit, and already in 2010 the program dropped enrollment dramatically, denying spots to over 100,000 applicants.

Even the more innovative workforce programs that ARRA funded were almost exclusively programs that were already connected in one form or another to New York’s workforce system. For example, most of the community-based organizations that contracted with SBS under ARRA-funded programs had already worked with the agency in the past, and SBS had already done most of the planning to open the health care Workforce1 Center.

To close observers of the city’s workforce development system, those results aren’t surprising—or necessarily a bad thing. “It allowed us to do a little more and a little sooner, but by and large the things that were done followed the directions that we had already set,” says Reginald Foster, IBM’s Corporate Community Relations Manager for the Tri-State area and a member of the New York City Workforce Investment Board (WIB). “The expansions followed existing strategies. A lot of the ARRA money went to doing more within the system.”

“I think basically they took the money and were able to spend it on an agenda they had already outlined and designed,” agrees Patricia Jenny, the program director for community development and the environment for the New York Community Trust. “[SBS] had a lot of conversations about how to spend the money, but in the end they spent it on programs that were already underway. You certainly couldn’t design and start something up in an 18 month timeframe.”

With the economy now on the mend, albeit slowly, and no political will for big-ticket spending at the federal level, another sharp uptick in WIA funding now seems extremely unlikely. Nevertheless, the last two years of increased funding offer a number of useful lessons. First, even though only a minority of ARRA dollars went to new initiatives, the fact that the city had several innovative programs already planned shows that the workforce system has the capacity and leadership to expand and innovate when given the right amount of support. The Department of Small Business Services (SBS), in particular, was given the chance to test out initiatives designed for dislocated workers who are higher up the career ladder and more firms learned that the system could serve their needs in finding that kind of candidate.

Next, ARRA came with several productive (and potentially permanent) changes to the way WIA dollars are disbursed, including a raise in age from 21 to 24 for WIA youth programs and the ability to use WIA funds to directly contract with educational institutions. In the past, city agencies were prevented from using WIA funds to develop training programs at community colleges, but because of this last change SBS was able to work closely with CUNY to build two of the agency’s most successful new programs. Both organizations want to continue the relationship.

Since 2003, when Mayor Bloomberg split the responsibility for services between the Department of Youth and Community Development (for youth) and the Department of Small Business Services (adult), the city’s once moribund workforce development system has made enormous strides. Most notably, the city has refocused attention on working more closely with local firms to provide training and placement services that match the real world needs of businesses. But there is still a lot work to do, and the need for workforce development to evolve has only increased since the Great Recession.

The city’s unemployment rate is still at an alarmingly high 8.6 percent. In late 2010, there were more than 96,000 New Yorkers who had been unemployed for more than a year, and 62,000 who had been unemployed for more than 18 months. Many mid-level managerial positions and low-level jobs in fields like construction and manufacturing aren’t coming back even as the economy begins to improve. More than ever, skills and a post-secondary education are a requirement to find a job.

For these reasons, when the funds run out in June 2011, the workforce system will sorely miss the support of ARRA. The opportunity for employment for low-skilled, poorly educated Americans is almost certainly going to be significantly smaller than it was in 2007. And yet federal cuts to WIA are expected to continue, and there still hasn’t been a meaningful shift towards truly supporting the integration of training and education into our workforce development system. Programs at DYCD and SBS still lack sufficient coordination, to say nothing of the shadow programs still operating at the Human Resources Administration (HRA). Talks of major cuts at the state level mean that some programs that were bolstered with ARRA funds risk being greatly diminished or, as with the innovative Advance at Work program for working poor New Yorkers, disappearing altogether.

How well did ARRA perform for workforce development? “I think the city took full advantage of the money,” says Suri Duitch, director of adult and continuing education at CUNY, “and now it’s gone.”