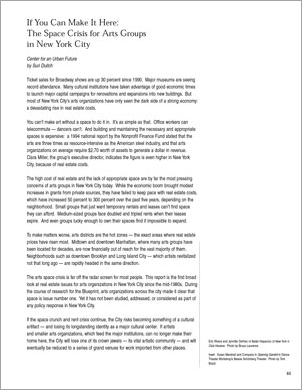 If You Can Make It Here

A special report on real estate issues and the arts, prepared for the New York Foundation for the Arts and included in the NYFA publication "Culture Counts."

Ticket sales for Broadway shows are up 30 percent since 1990. Major museums are seeing record attendance. Many cultural institutions have taken advantage of good economic times to launch major capital campaigns for renovations and expansions into new buildings. But most of New York City’s arts organizations have only seen the dark side of a strong economy: a devastating rise in real estate costs.

You can’t make art without a space to do it in. It’s as simple as that. Office workers can telecommute--dancers can’t. And building and maintaining the necessary and appropriate spaces is expensive: a 1994 national report by the Nonprofit Finance Fund stated that the arts are three times as resource-intensive as the American steel industry, and that arts organizations on average require $2.70 worth of assets to generate a dollar in revenue. Clara Miller, the group’s executive director, indicates the figure is even higher in New York City, because of real estate costs.

The high cost of real estate and the lack of appropriate space are by far the most pressing concerns of arts groups in New York City today. While the economic boom brought modest increases in grants from private sources, they have failed to keep pace with real estate costs, which have increased 50 percent to 300 percent over the past five years, depending on the neighborhood. Small groups that just want temporary rentals and leases can’t find space
they can afford. Medium-sized groups face doubled and tripled rents when their leases expire. And even groups lucky enough to own their spaces find it impossible to expand.

To make matters worse, arts districts are the hot zones--the exact areas where real estate prices have risen most. Midtown and downtown Manhattan, where many arts groups have been located for decades, are now financially out of reach for the vast majority of them. Neighborhoods such as downtown Brooklyn and Long Island City--which artists revitalized not that long ago--are rapidly headed in the same direction.