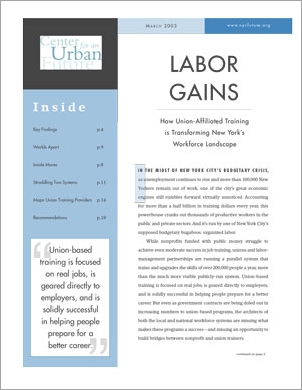 Though little heeded by the public and press, union-affiliated training is transforming New York's workforce landscape. In this new report, the Center offers the first comprehensive look at labor's substantial, and successful, training efforts.

In the midst of New York City’s budgetary crisis, as unemployment continues to rise and more than 100,000 New Yorkers remain out of work, one of the city’s great economic engines still rumbles forward virtually unnoticed. Accounting for more than a half billion in training dollars every year, this powerhouse cranks out thousands of productive workers in the public and private sectors. And it’s run by one of New York City’s supposed budgetary bugaboos: organized labor.

While nonprofits funded with public money struggle to achieve even moderate success in job training, unions and labor-management partnerships are running a parallel system that trains and upgrades the skills of over 200,000 people a year, more than the much more visible publicly-run system. Union-based training is focused on real jobs, is geared directly to employers, and is solidly successful in helping people prepare for a better career. But even as government contracts are being doled out in increasing numbers to union-based programs, the architects of both the local and national workforce systems are missing what makes these programs a success—and missing an opportunity to build bridges between nonprofit and union trainers.

Union-affiliated job-training programs operate nationwide, but in terms of concentration and diversity, their capital is New York City. Detroit might boast a comparable amount of training, but it’s all in the automotive industry. In New York, everyone from health care workers to carpenters, schoolteachers, and bakers gets into the act.

After a year of research, and over 100 interviews, conversations and site visits, the Center for an Urban Future presents the first comprehensive study of labor-affiliated job training in New York City. We’re very impressed with what we’ve found. Though the many differences between union and non-union training limit the value of comparisons, state officials who regulate labor’s workforce programs say that union-affiliated training is generally of higher quality than the typical government-funded program. And outcome measurements for labor-based training-—number of placements, starting pay, wage gains and total compensation-—are consistently superior to non-labor workforce programs.

The union-affiliated training programs described in this report came into being around the same time that the War on Poverty and related federal initiatives helped create the publicly run job-training industry. But where the public systems evolved from a “top-down” model of government largesse, organized labor—guided by the demands of union members looking to move up the ladder in their chosen fields or to improve their basic skills—used collective bargaining and other means to establish its own training and education programs.

“We found that many of our workers didn’t even have high school diplomas,” recalls Kathy Schrier, former education director of DC37 (the District Council of AFSCME, American Federation of State, County and Municipal Employees) of her program’s early days. “We placed an ad for GED training in a little union publication and 400 people responded. So we had to do something.” Sector after unionized sector has a similar story to tell. In some cases, they sought to provide another benefit to membership; in others, they hoped to boost membership with a steady influx of appropriately skilled workers.

Employers are generally willing participants in these programs—-and a crucial component of their success. For example, an unprecedented labor/management partnership called the Garment Industry Development Corporation (GIDC) has been a major asset to New York’s garment industry since the mid-1980s, when it seemed jobs in the trade might disappear from the city altogether. Since then, GIDC has worked to provide technical assistance to employers and better training to workers, and has inspired similar labor-management partnerships across the country.

Viewed as a system, the city’s healthcare workforce offers perhaps the best example of both the reach and effectiveness of union-led training. Local 1199/SEIU (Service Employees International Union), the health care workers’ union, has approximately 200,000 members in the state of New York, about 20,000 of whom seek training each year. On a regular basis, workers with little formal education sign up for educational training such as GED or ESL, computer or foreign language skills, or specialized healthcare training like x-ray machine operation, pharmacology or dental hygiene. Training programs, designed in close collaboration with city and state hospital associations, are offered to fit a wide variety of schedules and learning styles.

Once they’ve mastered those subjects, healthcare workers who began their careers in a support role, such as a housekeeper or certified nurse assistant, can move up the ladder as a licensed practitioner nurse or registered nurse, specializing in a wide range of sub-fields. The whole process can take years and requires that the worker remain dedicated to studying. But the union pays almost all costs (see 1199 case study), and helps provide many immigrants and low-income New Yorkers a real path to a well-paying job.

It sounds like an approach that would appeal to the architects of the publicly run job-training system. However, the road to effective partnerships between unions and other nonprofit providers is scarred with potholes—-the biggest of which are notable philosophical and programmatic differences and, more recently, direct competition for government funding.

The chasm between the two systems is explained in large part by the fact that they serve different populations. Generally, community-based or nonprofit providers work with unemployed individuals with low skills or other barriers to finding and keeping work. Most union-affiliated training programs, by contrast, offer services only to union members already on the job. Participants in these programs usually come with higher skills, more of a work track record and fewer barriers to employment.

Funding is another major difference. Typically, union-affiliated education and training programs are paid for through payroll levies and other agreements reached through collective bargaining; non-labor programs depend much more on government funding. This means that labor programs are both better funded, and more independent; their dollars come with fewer strings attached.

Finally, it would be a mistake to discount a significant cultural divide that often alienates each side from the other. Staff from nonprofits, foundations and, sometimes, city agencies recoil from the more in-your-face style of union training officials: even some champions of labor training concede that the environment isn’t always “politically correct.” For their part, union officials question the efficacy of smaller providers and the foundations that sustain them, and express doubt that their “boutique” operations can ever be brought up to scale.

These two worlds are starting to collide. Increasingly, unions like Local 1199/SEIU and organizations like the Consortium for Worker Education (see “Straddling Two Systems"), have also begun to win governmental grants and contracts to train membership—-often at the expense of smaller and less politically well-positioned nonprofit providers.

Despite the growing presence of union-based providers in publicly funded training (or perhaps because of the perception that the unions are more skilled at political deal-making than training), most government, philanthropic and academic decision makers don't take what labor does into account when they try to formulate policy. In pursuing this research, the Center hopes to help open a dialogue examining how the publicly run system can learn from techniques and philosophies that inform union-affiliated training. It’s time to consider how unions can form effective partnerships with nonprofit job-training groups, particularly community-based organizations that have struggled for so long with limited resources and the difficult task of making industry connections.