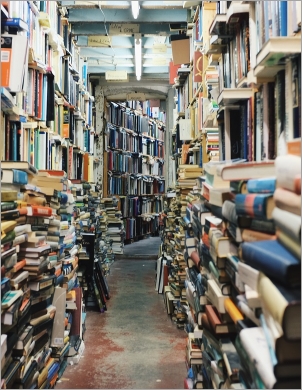 More Time in the Stacks: Library Hours in NYC Still Lag Behind Other Big Cities

by Jonathan Bowles and Avril Koblitz

New York City’s branch libraries are now open significantly more hours per week than at any point in the past decade. This marks an important improvement at a time when branch libraries have become vital information portals for New Yorkers who lack the essential literacy, language. and technological skills needed to get ahead today.

Due to a $43 million increase in library operating funds, which Mayor Bill de Blasio and the City Council agreed to in June 2015, the city’s libraries are now open 48.9 hours a week on average. This is up slightly from the same time last year, when the city’s branches were open 48.4 hours a week, but it represents a significant increase in hours of operation from just two years ago (44.7 hours per week) and from a decade ago (39 hours per week).

Despite the considerable improvement, New York City’s libraries are still open fewer hours than most of the largest library systems in the nation—including Los Angeles, Chicago, and Dallas—and most of the large counties in New York State. Meanwhile, fewer than 9 percent of the city’s branch libraries are open seven days a week, a smaller share than most other major library systems in the state and nation.

The analysis also shows that only 9 percent of New York City branch libraries are open seven days a week. This is a lower share than most of the nation’s other large cities and most of the state’s largest counties.

In advance of negotiations over the fiscal year 2018 budget, the City Council has proposed a $34 million increase in operating support for New York City’s libraries. Mayor de Blasio should agree to this funding boost, which would extend seven-day service from 15 branches to 53 branches.

This data brief is based on an assessment of posted library hours that we conducted in April 2017. 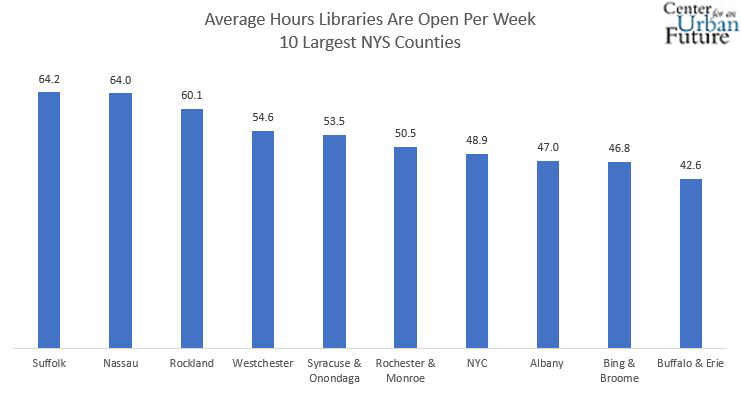 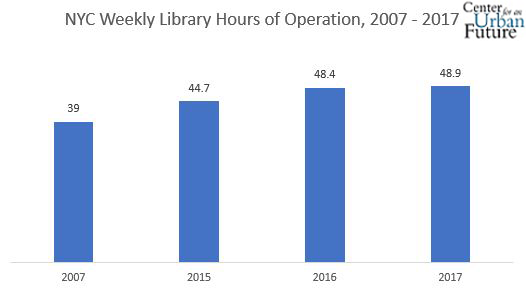 
Public library hours in NYC lag behind those across the country, report says

Public library hours in NYC lag behind those across the country, report says
amNewYork

Public library hours in NYC lag behind those across the country, report says
amNewYork