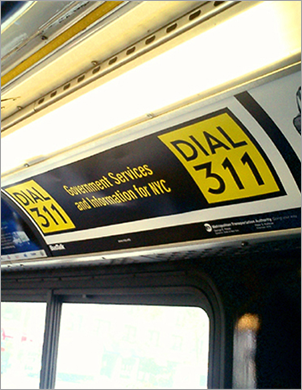 Op-ed: Next mayor must build a better 311

In this New York Daily News op-ed, the Center's Adam Forman writes that while New York created one of the first 311 systems, “the platform for the smartphone era is being created outside of New York.” He suggested that the next mayor should follow the lead of cities like Boston and Chicago, and enhance the 311 system by leveraging the full power of the Internet and mobile computing.

On June 10, a pothole on Fairfield Ave. was reported to Chicago 311. Within four days, a Department of Transportation “cave-in survey” was completed. Upon determining that the service request was outside of their jurisdiction, the case was referred to the Department of Water Management. Just 44 minutes later, Water Management officials arrived and performed a “Sewer Cave-in Inspection.” On June 18, at 9:14 a.m., the sewer was fully repaired and the street mended.

No media outlet reported on these events. No city employees were contacted for information. Instead, Chicago’s 311 Service Tracker provided detailed, real-time updates — engaging, reassuring and educating residents about the governing process. This is the next generation of 311.

Throughout the country, cities like Chicago are leveraging open-source data, the capabilities of mobile computing, and the creativity of private developers to better serve residents and increase accountability among government agencies.

New York, however, has fallen behind. Though the Bloomberg administration built one of the first and highest performing 311 systems, the platform for the smartphone era is being created outside of New York.

Just look at Boston. Its version of 311, Citizens Connect, uploads all open service requests to a Twitter feed and posts updates when cases are closed. Its smartphone app — the first in the country and still the most emulated — allows users to read recent submissions, look at accompanying pictures and even view their location on a map. The “City Worker” app assigns service requests to government employees while they are in the field and allows them to close out cases without ever returning to the office. Service requests are directly routed to the nearest work crew from the appropriate department, automatically and efficiently assigning responsibility.

Boston and Chicago are distinguished by the quantity and quality of their 311 open data. By adopting a uniform standard, they have granted programmers access to an interactive data set, allowing them to not only feed data onto their apps but submit queries and new information. This enhances the functionality of their software and increases interoperability so that apps developed for one of those cities can be easily adapted to another.

As cities around the country improve transparency and engage both private developers and one another, New York has remained insular.

Neither its 311 Twitter account nor its smart phone app display service requests from other New Yorkers, either on a map or as a running tally of recent submissions. This functionality would help residents understand the issues and needs of their community and, in select instances, solve problems without the assistance of government employees.

And while independent programmers are designing these mapping and service-tracking programs in cities like Boston and Chicago, New York is restricting participation from the increasingly dynamic civic tech sector.

A 311 system that leverages the full power of the Internet and mobile computing would enhance the existing system, assuring the effectiveness of government services and informing decision-making among agencies. 311 data and analytics have already allowed city agencies to efficiently deploy a wide variety of services and programs around noise abatement, disease control and pothole repair efforts, among many others.

As the 311 ecosystem matures, programmers envision apps that allow for more meaningful forms of citizen engagement, enabling residents to collaborate with one another and city agencies when planning streetscapes, parks and other neighborhood amenities.

While Mayor Bloomberg regards 311 as “the most powerful management tool ever developed for New York City government,” much more could be done to harness its full potency. To improve the transparency, accountability and efficiency of our government, the next mayor will have to look beyond our borders, to Boston and Chicago, for inspiration.

Adam Forman is a research associate at the Center for an Urban Future. This op-ed was originally published by the New York Daily News on October 4, 2013 and is republished with permission.