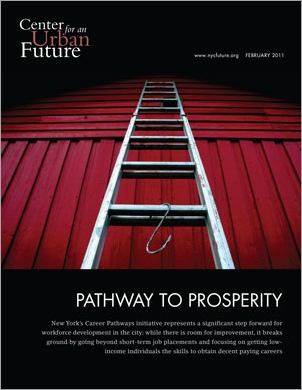 New York's Career Pathways initiative represents a significant step forward for workforce development in the city; while there is room for improvement, it breaks ground by going beyond short-term job placements and focusing on getting low-income individuals the skills to obtain decent paying careers.

Even before the Great Recession prompted policymakers to take a closer look at public programs designed to help unemployed Americans re-enter the workforce it had long been clear that federal, state and local government workforce development programs have not always effectively prepared low-income individuals to obtain decent-paying jobs. Job training and workforce preparedness programs are far from a bust: they have moved countless out of work individuals into jobs and, in recent years, many local workforce development systems—like the one in New York City—have clearly improved. However, the workforce systems in New York and across the United States have been far less successful in helping individuals develop new skills or upgrade their skills to be better-positioned over the long term to access the kinds of jobs that offer decent wages and clear opportunities for advancement.

In response to these shortcomings, a number of states have developed creative approaches to improve training of adult workers.  In Illinois, the state economic development agency has launched a system of community-business partnerships that develop job-linked training initiatives. In Washington State, community colleges have built a team-teaching system to provide integrated adult literacy and vocational instruction. And in several states—most notably Oregon, Kentucky and Arkansas—state leaders have adopted a model called “Career Pathways,” which integrates education, workforce development employment and supportive services in a way that keeps workers moving forward to achieve family supporting wages. While these models are diverse in structure, they all focus on providing deeper and more diverse skills training informed as directly as possible by employer needs.

New York has also begun the process of remaking its workforce development system, with an unusually strong commitment to the most disadvantaged adults. In 2008, New York launched the Career Pathways program, a joint initiative of the Office of Temporary and Disability Assistance (OTDA) and Department of Labor (NYSDOL). Over the last three years, New York has invested over $22 million in federal public assistance and workforce dollars in Career Pathways—a small portion of the state workforce training budget, but substantially more than most states have committed to new approaches.

This study provides the first assessment of how New York’s foray into Career Pathways is working. We find that while New York’s Career Pathway program falls short of similar efforts in other states in critical ways, the program represents a significant step forward for workforce development in New York City and, with the right support and a few adjustments, could provide the cornerstone for a new, better integrated workforce system.

In the years ahead, it will become critical for New York to improve its workforce development system. Hundreds of thousands of New Yorkers are currently out of work, and a large proportion of them lack the skills to effectively compete in today’s economy. Without a more effective workforce system, these individuals will find it increasingly difficult to obtain decent-paying jobs or advance in their careers. Furthermore, workforce development is also a service provided to employers. As the economy recovers, the local labor market may suffer from a skills mismatch in which thousands go unemployed while employers search in vain for skilled workers in high-demand sectors. Building the skills of New York’s home-grown workforce at all income levels is essential to maintaining the city’s competitive edge. Yet New York’s current workforce training system falls short of the needs of employers and low-income adults.

A key problem is that the primary federal law financing workforce development—the Workforce Investment Act (WIA)—rewards workforce providers for offering short-term vocational skills training and job placement programs. The long-term benefit of such assistance is disputed. Studies have found only modest value-added in these “express training” programs. Furthermore, WIA holds providers accountable for achieving high rates of job placement and retention, but says nothing about training those who cannot obtain skilled employment on their own. The result is a powerful incentive to “cream” the most prepared applicants.

These problems are exacerbated by fragmentation within the universe of workforce services. For instance, federally financed public assistance, workforce development and adult education programs in New York vary dramatically in eligibility standards, targeted outcomes, program rules and record keeping. As compliance-oriented systems, they expend significant time and resources screening applicants and collecting data that sometimes fails to measure the most important outcomes. No overarching vision links these different programs, and accountability within and between programs is minimal. As a result, low-income clients struggle to make the programs fit together in their own lives, often dropping out of programs unnoticed or failing to seize the best opportunities.

Providers are further discouraged from offering integrated programs by the steadily decreasing funding for workforce development. Over the past decade, federal workforce training funds under WIA have dropped by almost half in New York State, from $305 million in 2000 to $169 million in 2010.1 The 2000 funding level has dropped precipitously from 20 years prior. With this funding decline went much of the momentum for creative delivery strategies for workforce development.

The New York Career Pathways program confronts most of these challenges. Career Pathways came to New York in 2008 as part of a pioneering partnership between OTDA and NYSDOL. By collaborating, the two agencies were able to fund New York’s Career Pathways pilot program from two very different federal funding streams: TANF (Temporary Assistance for Needy Families), the program which disburses public assistance to low-income residents; and WIA, which supports a host of job training and workforce development initiatives.

Our assessment of the structure and implementation of New York’s Career Pathways initiative in New York City finds that the program breaks new ground in several important ways:

The Career Pathways program receives positive ratings from workforce development experts who have seen state training programs come and go over the years. They give Career Pathways high marks for pushing the workforce development system beyond short-term job placements and towards long-term skills development. Career Pathways values and rewards skills mastery and credential attainment as well as job placement and retention, and differentiates in “job quality”: positions offering higher wages and benefits are valued more highly than those paying closer to minimum wage. The connection between credential attainment and job placement gives providers strong motivation to collaborate with employers and organizations offering credential programs.

While we find that New York’s Career Pathways pilot program is on the whole a positive experiment that should be continued, there are clear areas where improvements should be made. A key shortcoming is that New York’s Career Pathways initiative is not structured along the lines of career pathways systems established in other states. These systems provide more intensive training necessary to obtain skilled employment, typically a year’s study leading to a market-recognized credential. Related to this, states such as Oregon, Kentucky and Arkansas rely primarily on community colleges rather than community-based organizations, emphasize education rather than short-term vocational training to employment, manage their systems through close collaboration between state and local agencies and stakeholders, and fund programs on a multi-year basis to encourage long-term planning.

The career pathways model in other states is based upon postsecondary credential attainment, and community colleges are frequently described as the “linchpin” of career pathways. The postsecondary component is essential because changes in the economy have increased the educational requirements for long-term economic success. The landmark Tipping Point study sponsored by Columbia University’s Community College Research Center found that low-skilled adults reach the “tipping point” for increased earnings after roughly one year of postsecondary education and training and a marketable credential.2 Community colleges are essential partners in establishing career pathways that extend to stable and family-supporting jobs.

The community colleges of the CUNY system have traditionally served as the primary route by which low-skilled adults in New York City can achieve a postsecondary credential. Yet CUNY has not been invited to join the Career Pathways Program as a partner, and individual colleges in most cases play only a limited role.

Without community colleges as a partner in this effort, New York’s pilot program has been restricted to shorter pathways than comparable programs elsewhere. For example, a nursing career pathway in Oregon or Kentucky would extend from entry-level Home Health Aides up to the Registered Nurse level or even beyond. However, most nursing career pathways in New York’s pilot program stop at Certified Nurse Aide (CNA) or CNA with Phlebotomy/EKG Certifications. Further steps on the nursing pathway would require postsecondary training, and the New York program is not structured to support that. “Career Pathways is defined by industry,” says Mimi Maduro, statewide director of the Oregon Pathways Initiative. “I know of none that would end the pathway at CNA or LPN. That’s the beginning of the process, not the end.”

When the Career Pathways initiative is viewed within the context of New York’s existing workforce development culture, the Career Pathways initiative looks quite impressive. That being said, the state would take a leap forward if it made a few basic reforms, such as creating partnerships with institutions of higher education; establishing long-term goals and funding structures; organizing state and regional planning bodies and overhauling performance measures to emphasize more intensive educational experiences.