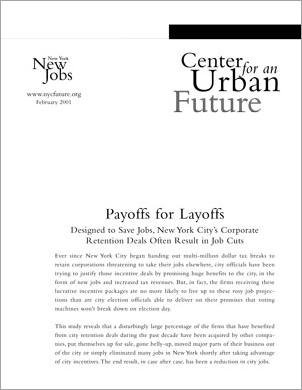 In recent years, New York City has attempted to retain major corporations through tax breaks and other sweetheart measures. But without any accountability measures, many of the businesses to benefit have cut jobs or relocated anyway.

Ever since New York City began handing out multi-million dollar tax breaks to retain corporations threatening to take their jobs elsewhere, city officials have been trying to justify those incentive deals by promising huge benefits to the city, in the form of new jobs and increased tax revenues. But, in fact, the firms receiving these lucrative incentive packages are no more likely to live up to these rosy job projections than are city election officials able to deliver on their promises that voting machines won't break down on election day.

This study reveals that a disturbingly large percentage of the firms that have benefited from city retention deals during the past decade have been acquired by other companies, put themselves up for sale, gone belly-up, moved major parts of their business out of the city or simply eliminated many jobs in New York shortly after taking advantage of city incentives. The end result, in case after case, has been a reduction in city jobs.

It is not surprising that successive mayoral administrations have showered hundreds of millions of dollars in tax breaks on corporations. Ever since Fortune 500 companies starting streaming out of the city in the 1970s, city officials have been trying to do something to keep those jobs in the five boroughs. And with the city's relatively high tax rates, tax incentives are one way to level the playing field for some New York businesses. In addition, corporate retention deals are an easy way for city leaders to give the impression of active involvement in the city's economic development. (It is a lot easier for a mayor to lay out $25 million in tax breaks to retain 2,000 jobs at one large corporation than it is to develop a program to retain hundreds of firms that have about 20 employees each.)

The problem, however, is that while the souped-up press releases announcing corporate retention deals sound great, city officials never update the public about whether individual deals are a success a year, five years or ten years after they are first announced. And the city’s Economic Development Corporation (EDC) has never commissioned an independent study to determine whether the companies that received city benefits actually fulfilled their employment promises.

This study of the roughly 80 companies that benefited from commercial retention deals in excess of $500,000 over the past 12 years, is the most comprehensive independent attempt to provide a glimpse into what corporate recipients have done in the months and years after these deals are announced. And it isn't encouraging.

Overall, it details 39 companies that announced major layoffs, large-scale mergers (which typically resulted in layoffs) or put themselves up for sale (which are likely to lead to layoffs) a short time after benefiting from retention deals. In the past five months alone, at least 16 companies that received city incentives announced significant job cuts.

And 13 companies that received city tax breaks merged with other firms that also got city tax deals, virtually guaranteeing a net loss in city jobs.

The overwhelming majority of the roughly 80 companies on the receiving end of retention deals are in the financial services, banking, insurance and media sectors. In the past two years, more than a half dozen dot coms, Internet consulting firms and other high-tech firms have gotten into the act.

But in recent years, mergers and consolidations were rampant within the banking, financial services and media sectors. And the high tech companies that once looked like sure bets to become the city's next generation of corporate heavyweights have been forced to cut back operations in the wake of plunging stock prices.

Other financial recipients, like Bear Stearns, haven't yet merged with other firms but have announced they are up for sale. Still others, such as Merrill Lynch, weren't involved in a major acquisition, but eliminated thousands of jobs nonetheless.

A majority of the dot coms and related high tech companies that benefited from city retention deals have since announced large-scale layoffs or merged with other media/Internet firms. One such firm, StarMedia Networks, was recently forced to lay off 15 percent of its work force and give back a large chunk of the office space that it had leased with the help of city incentives. Another firm, the Scient Corporation, said it would lay off 25 percent of its staff just nine months after it was awarded a city tax deal.

Perhaps the best example of the city’s failure to pick a high-tech winner is PSINET. At a press conference last February, the Mayor announced with much fanfare that the Internet company would open an office in Long Island City and bring 450 new jobs, with the help of city tax exemptions. Before the year was over, however, PSINET scrapped its plans to come to New York and announced hundreds of layoffs. (Since it never moved to New York, it never benefited from city tax breaks.)

Over the past 12 years, many of the major television and cable networks—including NBC, CBS, ABC, Fox, Viacom (which owns MTV and VH1) and Time Warner (which owns HBO and CNN)—have received multi-million dollar tax incentive packages to remain in New York. But in recent years, this industry has witnessed a wave of mergers. To name a few, Walt Disney bought ABC; Viacom purchased CBS and America Online took over Time Warner. Because the newly formed companies often have overlapping staff, layoffs commonly follow the mergers.

Financial exchanges account for a large percentage of the more than $2 billion in tax incentives awarded by the city over the past 12 years. The New York Mercantile Exchange, the New York Board of Trade and the Nasdaq all benefited from expensive retention deals. The Giuliani Administration has also promised roughly $600 million in subsidies and tax breaks to the New York Stock Exchange. Though the exchanges are extremely important to the city’s economy, these deals fly in the face of the fact that, throughout the world, trading floors are increasingly being replaced by electronic trading systems. In the long run, exchanges such as these are likely to see a decline in jobs, a trend born out by the Mercantile Exchange’s decision to lay off 10 percent of its staff last summer.

Companies that merged with other firms, downsized or moved jobs out of New York soon after benefiting from city tax breaks aren't deadbeats. Most simply made rational business decisions that resulted in a loss of jobs. The fact that they chose to benefit shareholders rather than New York employees shouldn't come as a surprise to city officials.

It is impossible to know how many of the firms that received city tax breaks over the years have defaulted on their pledges to retain and create jobs in New York: EDC does not make any information about these firms' employment levels available to the public, or even the City Council. But enough of them have announced significant layoffs or mergers in recent years to raise fundamental doubts about the effectiveness of firm-specific tax breaks as an economic development tool. The fact that so many firms have slashed their work force during a time of extended growth in the city's economy further highlights the problems with this longtime city policy.

This report makes the case that city policy makers should shift the city's economic development strategy from a defensive policy consisting largely of reacting to individual companies’ threats to a more forward-looking policy that addresses the obstacles to growth facing a range of the city's most vital industry sectors and the many firms, both small and large, that make up these sectors.