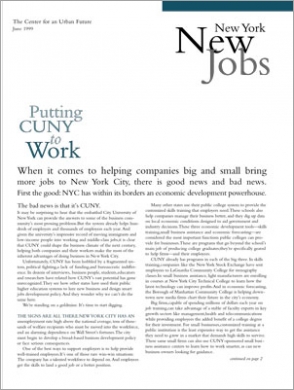 Though underutilized up to this point, the City University of New York is a potential economic development powerhouse. With closer ties to the city's business community, CUNY could make virtually unlimited contributions to New York's economic well-being.

When it comes to helping companies big and small bring more jobs to New York City, there is good news and bad news.

First the good: NYC has within its borders an economic development powerhouse.

The bad news is that it's CUNY.

It may be surprising to hear that the embattled City University of New York can provide the answers to some of the business community's most pressing problems. But the system already helps hundreds of employers and thousands of employees each year. And given the university's impressive record of moving immigrants and low-income people into working and middle-class jobs, it is clear that CUNY could shape the business climate of the next century, helping both companies and their workers make the most of the inherent advantages of doing business in New York City.

Unfortunately, CUNY has been hobbled by a fragmented system, political fighting, a lack of funding, and bureaucratic indifference. In dozens of interviews, business people, students, educators and researchers have related how CUNY's vast potential has gone unrecognized. They see how other states have used their public higher education systems to lure new business and design smart jobs development policy. And they wonder why we can't do the same here.

We're standing on a goldmine. It's time to start digging.
The signs are all there. New York City has an unemployment rate high above the national average, tens of thousands of welfare recipients who must be moved into the workforce, and an alarming dependence on Wall Street's fortunes. The city must begin to develop a broad-based business development policy or face serious consequences.

One of the best ways to support employers is to help provide well-trained employees. It's one of those rare win-win situations: The company has a talented workforce to depend on. And employees get the skills to land a good job or a better position.

Many other states use their public college system to provide the customized skills training that employers need. These schools also help companies manage their business better, and they dig up data on local economic conditions designed to aid government and industry decisions. These three economic development tools-skills training, small business assistance and economic forecasting-are considered the most important functions public colleges can provide for businesses. These are programs that go beyond the school's main job of producing college graduates; they're specifically geared to help firms-and their employees.

CUNY already has programs in each of the big three. In skills training, companies like the New York Stock Exchange have sent employees to LaGuardia Community College for stenography classes. In small business assistance, light manufacturers are enrolling in courses at New York City Technical College to learn how the latest technology can improve profits. And in economic forecasting, the Borough of Manhattan Community College is helping downtown new media firms chart their future in the city's economy.

Big firms, capable of spending millions of dollars each year on job training, can take advantage of a stable of faculty experts in key growth sectors like management, health and telecommunications while providing employees the added benefit of a college degree for their investment. For small businesses, customized training at a public institution is the least expensive way to get the assistance they need to grow in a market that demands high skills to survive. These same small firms can also use CUNY-sponsored small business assistance centers to learn how to work smarter, as can new business owners looking for guidance.

Historically, CUNY's mission has been to provide access to higher education for all New Yorkers, including those who would otherwise find it difficult to move into the city's workforce.

This core mission should not change, but enormous potential benefits to business owners and students enrolled in the CUNY system remain untapped. Most big corporations are clueless about the services that CUNY provides, and many small companies can't cobble together the funding necessary to send their key staffers to CUNY for training. The system is so fragmented that it's virtually impossible to determine what services are available, even assuming work-absorbed business owners are willing to take the time to look into such things.

Much of the blame comes from a lack of support: from Albany, City Hall, even within the system itself. Most CUNY campuses have never made economic development a core part of their mission. Over and over, school officials told our researchers about the frustrations of running a promising business development program without help from government economic development agencies, CUNY's administration or even their own colleagues.

It is an unjustifiable waste. Throughout the rest of the country, public colleges have become the focal point of economic development efforts. In states like Iowa and North Carolina, where unemployment is almost nonexistent, colleges train an average of 15,000 private sector workers per year, subsidized by the state as a way of attracting new jobs.

But CUNY has never been viewed as a bona fide economic development agency by New York's elected officials and planners. There is no coordinated policy to capitalize on the system's inherent potential. And so business assistance and job-training programs-which actually turn a profit for most of the schools-have often been neglected, taken for granted and even attacked. Valuable state programs to link employers to schools have been funded, defunded, overhauled, handed off from agency to agency or killed outright.
Over the last two years, CUNY has become the site of one of the most destructive stalemates in New York City's political life.

On one side, the mayor is pursuing an agenda to end remedial classes at the senior colleges, a measure long pushed by conservative ideologues. On the other side are liberal academics and politicians fighting vigorously to save a 50-year-old mandate to make the system as accessible as possible to the poor.

This report is not intended to add to the voluminous and often misdirected body of bitter debate. Instead, we urge the combatants to view the system from the perspective of its students and the people who employ them-as the most important institution in the city for workforce and job development.

In light of these realities, the argument is simple. New York City needs a job training engine and the City University needs to rehabilitate its reputation. It's time that people stop fighting and start doing business.