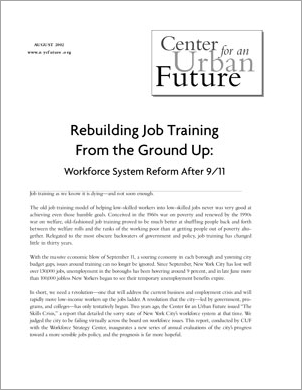 Rebuilding Job Training from the Ground Up

Nearly a year after the disaster of September 11, New York City has begun a long-overdue reform of its workforce development system. In this report, the Center finds the early returns encouraging-but warns that heavy lifting lies ahead.

Job training as we know it is dying--and not soon enough.

The old job training model of helping low-skilled workers into low-skilled jobs never was very good at achieving even those humble goals. Conceived in the 1960s war on poverty and renewed by the 1990s war on welfare, old-fashioned job training proved to be much better at shuffling people back and forth between the welfare rolls and the ranks of the working poor than at getting people out of poverty altogether. Relegated to the most obscure backwaters of government and policy, job training has changed little in thirty years.

With the massive economic blow of September 11, a souring economy in each borough and yawning city budget gaps, issues around training can no longer be ignored. Since September, New York City has lost well over 130,000 jobs, unemployment in the boroughs has been hovering around 9 percent, and in late June more than 100,000 jobless New Yorkers began to see their temporary unemployment benefits expire.

In short, we need a revolution—one that will address the current business and employment crisis and will rapidly move low-income workers up the jobs ladder. A revolution that the city—led by government, programs, and colleges—has only tentatively begun. Two years ago, the Center for an Urban Future issued “The Skills Crisis,” a report that detailed the sorry state of New York City’s workforce system at that time. We judged the city to be failing virtually across the board on workforce issues. This report, conducted by CUF with the Workforce Strategy Center, inaugurates a new series of annual evaluations of the city’s progress toward a more sensible jobs policy, and the prognosis is far more hopeful.

The report evaluates the city’s ability to fundamentally create a workforce system from the uncoordinated fragments previously in place. Our conclusion is that changes already made under the new mayoral administration of Michael Bloomberg look promising, and for those improvements we grant the mayor an “A” for effort. We found that the twin effects of the immediate economic fallout after September 11 and the drive of a new administration have awakened city government to both the importance of training programs to businesses and New Yorkers looking for work, and to the severe neglect these programs have witnessed over the past 30 years. As this report details, the reforms needed to establish an effective network of training and employment services have just now begun and still require a lot more hard work.

Business leaders and policymakers face serious challenges in order to create a coherent, effective job training system—chief among them conquering chaos and inertia and resisting the timeless bureaucratic urge to maximize power rather than rationalize services. In the midst of a budget crisis and a desperate need to retain businesses, the city has a golden opportunity to realign the bureaucracy so it can effectively plug New Yorkers into jobs and rebuild a powerful, vibrant local economy.

In the current period of economic uncertainty, there is an especially urgent need for local policymakers to address these two aims together. New York City companies, forced to add increased security and insurance costs to the already high price of doing business in the city, are struggling. High-quality training programs can help them stay competitive—and stay local.

Other cities that already had enjoyed success with this model were able to respond effectively as the September 11 attack roiled their local economies. Boston and Seattle, both of which had revamped their employment services during the 1990s to tie workforce development more closely to city businesses, established large scale training centers at the airports and other economically hit areas.

New York was unable to offer as much in terms of quick retraining opportunities for workers displaced by the attacks, but the city did set up effective emergency response centers for those pushed out of work. In the aftermath of that effort, the city saw progress on its training programs for the first time in 30 years. With the greater business and partnership focus of the Bloomberg administration, city government is taking tentative steps toward building a real workforce system, coordinating the previously disorganized efforts of the city Department of Employment, Economic Development Corporation, and Human Resources Administration. Many traditional job training service providers are forging new connections to local employers. Also, New York already has in place many of the building blocks for a better system: community colleges focused on business skills, committed funders interested in workforce policy, and employer groups and trade associations eager to see evidence that the system can help address their hiring needs.

Before the current economic slump, the problems with job training were not so obvious. During the vigorous growth of the 1990s, most people leaving the welfare rolls found jobs fairly quickly.

The economic shift and the fallout from the WTC attacks have been particularly hard on the newly employed. Many of those who did land jobs during the expansion remained poor: A recent Urban Institute study showed that New York welfare recipients leaving the rolls in 1997 earned an average of about $14,000 per year, below the poverty line for a family of three. As the economy cooled, many found themselves out of work once again, no closer to a career path that might lift them out of poverty for good, and fast approaching the five-year limit on federal welfare benefits.

This predicament was avoidable. New York City has always been able to attract the best and the brightest from across the country, and the most ambitious and hardworking immigrants from across the globe. Yet local employment programs have lagged behind the curve. (For details, see our previous reports, The Skills Crisis and The Workforce Challenge, released in 2000 and 2001, respectively.)

The 1990s job training system did virtually nothing to help poor people access higher education, despite increasing employer demand for higher skills and the longstanding correlation between education and higher wages. While other states were using community colleges to train dislocated workers and tailor worker skills to local job demand, New York ignored universities like the CUNY system. Ultimately, the emphasis on short-term training over long-term skills improvement ushered the unemployed into unstable, dead-end jobs.

The system that must emerge from the current workforce policy chaos needs to right these wrongs. It should embrace job training providers, community colleges, employer groups and city agencies. It must engage New York’s community colleges to address the skills gap; it must champion the idea of progressive career pathways. Above all, the new system must integrate education, training and work experience into a system that can serve every worker looking to advance or gain new skills.

The goals of this new policy drive are simple: to move potential workers up and out of welfare and to serve business needs. These two principles depend on each other. A workforce system that succeeds in moving workers up career ladders will ultimately produce skilled employees who can improve business productivity.