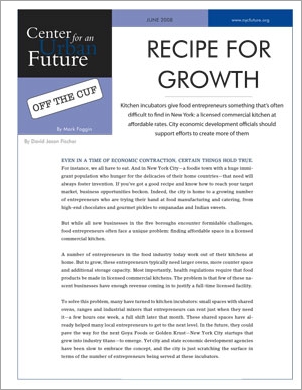 This Off the CUF commentary urges city economic development officials to support the creation of additional kitchen incubators, which give food entrepreneurs something that's often impossible to find in New York: a licensed commercial kitchen at affordable rates.

Update: In June 2008, the Center for an Urban Future published a policy brief titled “Recipe for Growth” that urged city economic development officials to create additional kitchen incubators. The piece, authored by Mark Foggin, showed that kitchen incubators give food entrepreneurs something that's often impossible to find in New York: a licensed commercial kitchen at affordable rates. Yet it revealed that there were only four of these shared facilities in the five boroughs, serving a total of 60 entrepreneurs—a fraction of the demand in a city that boasts a growing number of entrepreneurs who are trying their hand at food manufacturing and catering, from high-end chocolates and gourmet pickles to empanadas and Indian sweets.


Helping Budding Foodies Through Kitchens on the Cheap