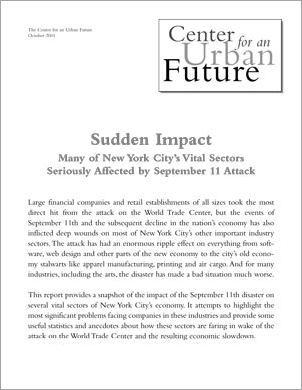 Many of New York Citys vital economic sectors were seriously affected by the September 11 attack.

Large financial companies and retail establishments of all sizes took the most direct hit from the attack on the World Trade Center, but the events of September 11th and the subsequent decline in the nation's economy has also inflicted deep wounds on most of New York City's other important industry sectors. The attack has had an enormous ripple effect on everything from software, web design and other parts of the new economy to the city's old economy stalwarts like apparel manufacturing, printing and air cargo. And for many industries, including the arts, the disaster has made a bad situation much worse.

This report provides a snapshot of the impact of the September 11th disaster on several vital sectors of New York City's economy. It attempts to highlight the most significant problems facing companies in these industries and provide some useful statistics and anecdotes about how these sectors are faring in wake of the attack on the World Trade Center and the resulting economic slowdown.

Among the major findings of this study:

The Arts
More than 100 arts groups around the city experienced substantial revenue shortfalls and most experienced considerable hits to all of their primary revenue sources (earned income, contributed income, and government funding). Additionally, the cancellation of virtually all inter-borough school trips has ripped a big hole in museums’ education budgets.

Though the arts have not yet experienced major layoffs (with job cuts in the hundreds rather than the thousands), every arts institution surveyed is drafting “contingency” plans to cut staff, furlough workers and eliminate all new positions.

Software/New Media
Roughly 50 software firms and other computer-related businesses were displaced by the disaster.

One of the biggest blows to New York's nascent high-tech industry was the destruction of the New York Telemedia Accelerator, a 22,000 square foot incubation center for several young technology firms.

Cutbacks in investments by venture capital firms and reductions in tech spending by major financial clients have hurt high-tech firms throughout the city.

Printing
Business in the industry is down by more than 25 percent since the attack.

While several printers located in downtown Manhattan were temporarily displaced by the collapse of the World Trade Center, the greatest problem facing the industry overall is a significant loss of business from clients in the finance, advertising and publishing sectors.

Apparel
Many of the roughly 250 garment factories in Chinatown had to shut down for at least a week after the attack, a difficult task for companies that operate on extremely low profit margins. The 50 manufacturers located below Canal Street were closed for a longer period and subsequently operated far below full capacity because delivery trucks couldn't get in and out of the area.

Designers and contractors lost business because department stores and other major retailers, facing a sharp slowdown in consumer buying, have severely cut back new orders and, in some cases, even cancelled orders they’d already placed.

Aviation and Air Cargo
A major decline in air travel has resulted in a tremendous loss of business for hundreds of airlines, freight forwarders, truckers, food preparation companies, limousine services, parking lot operators, hotels and other airport-related businesses in Queens.

While air cargo traffic has rebounded more than passenger travel, companies involved in the movement of cargo to and from Kennedy Airport have been affected by frequent inspections of trucks on the Hudson River crossings.

Biotechnology
Though none of the city's biotech firms were directly affected by the attack on the World Trade Center, the pending fiscal crisis could force city and state government officials to reduce or cancel several important biotech-related development projects that had been slated to receive public subsidies.