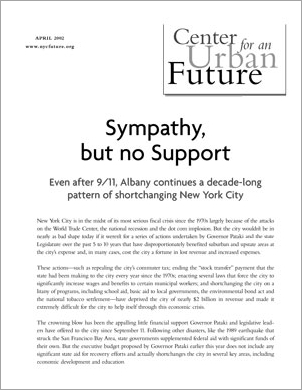 Sympathy but no Support

This report by Center research director Jonathan Bowles illustrates how even after September 11, state government in Albany has continued a decade-long pattern of shortchanging New York City.

New York City is in the midst of its most serious fiscal crisis since the 1970s largely because of the attacks on the World Trade Center, the national recession and the dot com implosion. But the city wouldn’t be in nearly as bad shape today if it weren’t for a series of actions undertaken by Governor Pataki and the state Legislature over the past 5 to 10 years that have disproportionately benefited suburban and upstate areas at the city’s expense and, in many cases, cost the city a fortune in lost revenue and increased expenses.

These actions-—such as repealing the city’s commuter tax; ending the “stock transfer” payment that the state had been making to the city every year since the 1970s; enacting several laws that force the city to significantly increase wages and benefits to certain municipal workers; and shortchanging the city on a litany of programs, including school aid, basic aid to local governments, the environmental bond act and the national tobacco settlement-—have deprived the city of nearly $2 billion in revenue and made it extremely difficult for the city to help itself through this economic crisis.

The crowning blow has been the appallingly little financial support Governor Pataki and legislative leaders have offered to the city since September 11. Following other disasters, like the 1989 earthquake that struck the San Francisco Bay Area, state governments supplemented federal aid with significant funds of their own. But the executive budget proposed by Governor Pataki earlier this year does not include any significant state aid for recovery efforts and actually shortchanges the city in several key areas, including economic development and education.

Ironically, the city almost single-handedly drove the state’s economy during the boom years of the 1990’s, accounting for more than half of all new jobs created statewide and a similar share of state tax revenues. At a time when upstate communities were losing residents and struggling financially, revenues from Wall Street, the city’s then growing technology sector and tourism to the Big Apple provided the state with the surpluses that allowed the governor and Legislature to balance the budget, enact roughly $11 billion in politically popular tax cuts and provide about $728 million in emergency financial aid to municipalities outside of the city since 1996.

The state is dealing with its own budget crunch and surely shouldn’t be expected to come up with billions in new aid for the city this year. But the governor and legislative leaders haven’t even shown a willingness to make it easier for the city to undo some of the harmful measures they enacted when the city was flush with money-—and thereby let the city help itself. Moreover, the state would have more flexibility to aid the city if the governor and legislative leaders would reject less important programs, like the fiscally unsound Health Care Reform Act, and defer the state tax cuts that are set to take effect this year.

Albany’s failure to come through with additional aid to the city—-or to reverse prior decisions that have harmed the city, like the repeal of the commuter tax and the elimination of the stock transfer tax payment—-has left Mayor Bloomberg with little choice but to propose painful budgetary actions like borrowing $1.5 billion to pay this year’s expenses and making nearly $2 billion in spending cuts, including potentially harmful reductions to the school system.

“With a $4.8 billion deficit, it’s very difficult to keep absorbing all of these hits,” said one top official in the Bloomberg Administration. “Without any fiscal help, there’s going to be real pain at the local level.”

This report, based on a two-month study by the Center for an Urban Future, is the first comprehensive analysis of the gamut of state actions taken over the past decade that have negatively impacted the city. And in addition to simply documenting decisions that have cost the city revenue or imposed new financial mandates on the city, this report also catalogues spending programs, tax cuts and other initiatives that have benefited other parts of the state at the city’s expense.

This report is not an attempt to get Albany to provide all the money the city needs to close its budget gap or a plea to increase overall spending in the state’s 2002-2003 budget. And it is not intended to downplay or disregard the very real needs of many struggling upstate communities.

However, it does conclude that New York City isn’t getting its fair share from Albany and that the state’s bias against New York City has been getting worse in recent years.

“You can make an argument that Albany has done more damage to the city’s budget than 9/11 did,” said Adam Barsky, the city’s budget director during the final years of the Giuliani Administration. “Credit agencies that monitor the city actually cite Albany as being more of a credit risk [to the city] than anything else in the economy—because it has a long track record of doing harmful things to the city and preventing the city from doing the things it needs to do to help itself.”

Of course, the city isn’t without blame. The Giuliani Administration squandered some of the financial benefits of the late ’90s boom; using surpluses to significantly expand the city’s workforce, dramatically increase overtime spending and freeing city teachers of administrative duties they previously performed. It skimped on city support for education and missed an opportunity to pay off a significant portion of the city’s debt. And Mayor Giulaini rarely went up to Albany to demand a fair share of state aid.

To be sure, the city has been promised more than $20 billion in aid from the federal government for rebuilding damaged infrastructure in lower Manhattan. But these funds won’t help the city’s budget recover from the loss of more than 100,000 jobs since 9/11, the relocation of corporations to safer suburban locations or the steep decline in international tourism.

This report argues that city needs—-and deserves—-substantially more financial support from Albany. It also urges the state to address its long-time practice of enacting spending programs, tax cuts and other initiatives that deprive the city of its just share of state resources.

Among the report’s major findings: