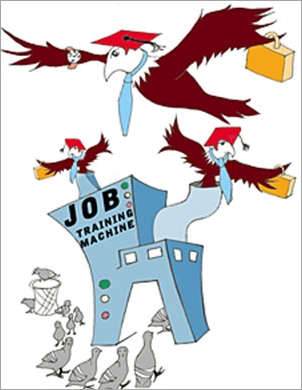 In this article for the Gotham Gazette, the Center looks at how New York City suddenly found itself in an ironic use-it-or-lose-it situation with $67 million in federal funding for job training.

With so many New Yorkers suddenly out of work after September 11th, the city government set up a series of much-publicized job fairs at Madison Square Garden. Tens of thousands of the unemployed came in search of work, and according to the city's Human Resources Administration, more than 1,250 people found it. The agency also set up the Twin Towers Job Link system, four job centers scattered throughout the city that offered a variety of services to sudden job searchers, such as the use of phones and computers, as well as a database of available jobs.

To people not following the city's track record in workforce development, this effort might have seemed impressive. But nobody who knows what Boston or Seattle or many other cities have been doing, was impressed with New York City's last-minute scramble -- least of all the federal government. That is why the feds gave New York City just $25 million in a National Emergency Grant for the re-training of workers who had lost their jobs. This sum is only enough to re-train about 6,000 workers, or about six percent of those who had been thrown out of work in October alone.

Why so little? "It's difficult to make the case for more," replied Marilyn Shea, the city's regional administrator with the United States Department of Labor, "when there's so much unspent money."

Yes, that's right. In this crisis time of dizzying budget deficits and daunting unemployment figures, New York City has been sitting on a pile of unspent federal workforce funds -- $67 million, to be exact. The city has been so slow in using these funds that the feds and the state now have set a deadline of June 30 for the city to spend the money. Whatever the city does not spend by that date will be handed over to New York State, which can then redistribute it to other areas that have made better use of their funding.

So, it is literally the $67 million question: Will the city use this money it was given for job training programs, or will it lose it?

Mayor Michael Bloomberg inherited this mess from his predecessor in City Hall. Rudy Giuliani did not think highly of job training, and neither did the man he appointed as commissioner of the Human Resources Administration, Jason Turner.

Focused on cutting the welfare rolls, Giuliani and Turner somehow viewed job training as a means for poor New Yorkers to continue dependence and put off getting a job.

The city's economic boom during the 1990's helped camouflage the harmful aspects of this approach, producing tons of low-wage service jobs filled by individuals coming off welfare. But this did nothing for the hundreds of city employers starving for skilled workers.

Ironically, those few programs in which the agency did work directly with employers produced occasionally spectacular results, including a project with Sun Microsystems. Sun trained and placed a dozen former welfare recipients as computer network administrators. But the city pursued precious few customized training initiatives like this with specific employers, even though they would guarantee job placements, and classroom-based training was entirely out of the question. More typically, then, the city's approach meant that many of those formerly on welfare were now working, but still poor.

This was not what Congress intended when it passed the Workforce Investment Act in 1998. Under the act, local business people are supposed to take the lead in making policy, through what are called Workforce Investment Boards. But while many states took advantage of an option to implement the new law early and thus got a head start on setting up their programs, New York did not get started until mid-2000.

New York City formed a "provisional" Workforce Investment Board just days before the federal deadline to do so on June 30, 2000, and has created just one of the one-stop job centers mandated by the act and intended to serve as the primary means for delivery of services to job seekers. Los Angeles, by contrast, has 18. Houston has 12. Even Tampa has five.

New York's Workforce Investment Board soon proved to be largely powerless. At a recent New York City Council hearing, the head of the board, Stuart Saft, observed that to the Giuliani administration, the board was "the functional equivalent of a speed bump° [There was] a strong concern that the board would interfere with whatever the philosophy was with respect to employment and training."

That philosophy proved insufficient to address the employment crisis that arose after September 11. Efforts elsewhere, however, were bolstered by systems already in place. Boston, for example, was able to set up an emergency one-stop center at Logan Airport, where thousands had been laid off after the attacks. Essex County, New Jersey soon followed suit at Newark Airport. Across the country, local areas were using already-thriving workforce networks to craft creative and effective emergency responses to an economic shock that was felt far beyond New York City's borders.

We have an opportunity in New York to make a break with the failed policies of the past. City Hall has signaled a newly pragmatic approach to workforce development. Unlike their predecessors, both Commissioner Verna Eggleston of the Human Resources Administration and Commissioner Betty Wu of the city's Department of Employment have been saying all the right things. Eggleston, for example, has made clear that employers will now be preferred customers for her agency, and has called for increased collaboration with the city's Economic Development Corporation to work with businesses in training employees.

To move the issue forward, however, Mayor Bloomberg himself has to get involved. The one constant of all the cities that have succeeded with workforce policy is that the mayor has taken an active role. Besides, no one has more credibility with the business community than this mayor.

Additionally, the Workforce Investment Board must be empowered to fulfill its legal function as the primary voice in setting job training policy in New York. The board is key in getting employers involved, figuring out where job growth will occur, and determining what training really works and what does not. Our ultimate aim should be to make sure that workforce development is an integral part of economic development in our city.