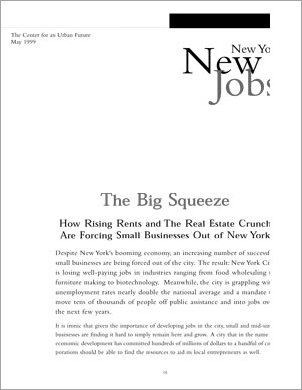 The Center for an Urban Future conducted a four month investigation of the needs of small businesses in all five boroughs, interviewing nearly 100 people, including small business owners, private planners, and officials at local development corporations, city and state agencies, business advocacy groups, associations and local chambers of commerce. The findings are surprising:

1) A LACK OF AFFORDABLE REAL ESTATE IS THE NUMBER ONE PROBLEM FOR SMALL BUSINESS OWNERS IN NEW YORK.

2) BUSINESSES FORCED OUT OF MANHATTAN BY SKYROCKETING RENTS FIND LITTLE SPACE AVAILABLE IN THE OUTER BOROUGHS.

3) THE SPACE CRUNCH IS CAUSING THE CITY TO LOSE JOBS IN HIGH PAYING INDUSTRIES LIKE MANUFACTURING, HIGH TECHNOLOGY AND BIOTECHNOLOGY.

4) THE SPACE CRUNCH IS LARGELY A FACTOR OF WAREHOUSING BY PRIVATE LANDOWNERS AND THE CITYâS FAILURE TO AGGRESSIVELY ENCOURAGE DEVELOPMENT OF VACANT AND UNUSED INDUSTRIAL PROPERTIES.