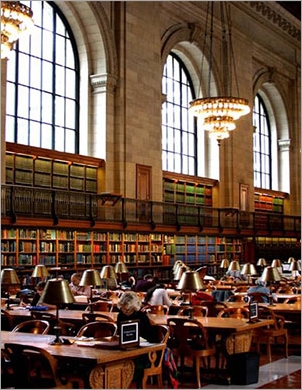 The Economic Impact of NYC’s Libraries

At a City Council hearing on the city's proposed $100 million budget cut to public libraries, CUF's David Giles testified on the growing importance of branch libraries as community centers. At a time when the city faces enormous human capital challenges, more and more New Yorkers depend on the public libraries for job information, resume writing help, adult literacy, English language classes and other key services.

Good afternoon. My name is David Giles and I am the Research Director at the Center for an Urban Future, which is an independent policy institute that publishes studies about how to grow and diversify New York’s economy and expand economic opportunity. Over the years, the Center has published dozens of reports about key opportunities and challenges for New York, with studies focusing on everything from the powerful impact of immigrant entrepreneurs in New York’s economy and the increasingly important role of community colleges as platforms for economic mobility to the need to improve New York City’s workforce development system at a time when more quality jobs require skills and educational attainment beyond the high school level.

In 2007, we published a policy brief called “Branching Out,” which concluded that libraries boost the competitiveness of the city’s future workforce and improve the quality of life for untold numbers of seniors, parents, children and immigrants. We are now researching a new comprehensive report on the city’s three library systems that will be published later this year. Although I am not yet ready to share our concrete findings, I can confidently say that, based on our research so far, public libraries are absolutely vital to the city’s economy and quality of life. With roots in nearly every community across the five boroughs, New York’s public libraries play a critical role in fostering reading skills in young people, assisting adults in upgrading their skills and finding jobs, helping immigrants assimilate, and providing technology access for those who don’t have a computer or an internet connection at home.

Our researchers have already visited over a dozen library branches in all five boroughs and have interviewed more than 50 people about the important role libraries play in city neighborhoods. We’ve talked to librarians and library patrons as well as a wide-variety of community and non-profit leaders.

And we’re finding that today library branches serve more as community centers than book repositories, with services tailored to meet the needs of specific communities.  In Central Brooklyn, for example, the Kings Highway Branch has two Russian speaking librarians who not only field questions about books but help recent immigrants learn basic computer skills. The Bronx Library Center has a whole floor dedicated to job seekers looking for advice on how to find job opportunities or prepare an effective resume. And the teen library in Far Rockaway is a popular place for teens to socialize after school and receive job readiness advice from youth counselors.  Other services provided across all three systems include: Free ESOL instruction, GED preparation, classes on writing basic financial documents for small businesses and freelancers, financial education seminars for teens and adults that cover credit card debt, budgeting and banking, basic computer literacy courses, and of course research and homework help for public school students. Gaps in the city’s ability to address societal needs—from alarmingly low literacy rates and a dismal GED attainment rate to the city’s economic disadvantage in not having adequate state-run ESOL programs—are filled by local public libraries.

One other important function that goes largely unnoticed is the critical support services that libraries provide on behalf of government agencies and social service non-profits. For example: Countless New Yorkers go to their local libraries to pick up their tax forms and learn about tax prep services. Librarians are constantly fielding questions about job applications and resume writing, which can be a critical first step to the job placement services provided by the city’s Workforce One Centers. Libraries are also officially-designated “cooling centers” during the summer. And the Department of Youth and Community Development places thousands of young New Yorkers in internships at the libraries every summer.

Despite all this, the public libraries have been hugely undervalued by New York policymakers and business leaders, taken for granted by much of the public, and largely disconnected from conversations about bolstering New York’s economy and quality of life over the next couple of decades.

In the years ahead, New York will need to address a number of profound social, demographic, and economic challenges—from an alarming number of disconnected youth and a fast-growing elderly population to the continued transition to a knowledge economy where employers in nearly every industry are demanding higher levels of literacy, digital proficiency and educational attainment.

Few institutions are better positioned than the city’s public libraries to help the city meet all of these challenges. By reaching thousands of children on a regular basis, libraries already serve as an important complement to the public schools. They are a trusted resource for immigrants. And they reach countless numbers of elderly residents. As Tom Kamber, founder of Older Adults Technology Services, told us in 2007: “It would be a shock if 20 percent of seniors had access to the Internet at home. So what they end up doing is going to the local technology resource. In 75 percent of the cases, it’s the library.”