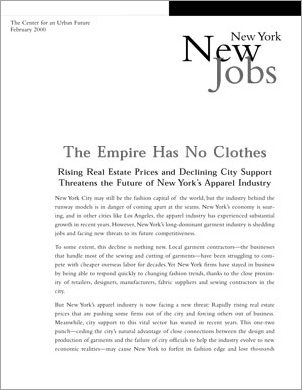 The Empire Has No Clothes

New York City may still be the fashion capital of the world, but the industry behind the runway models is in danger of coming apart at the seams.

New York's economy is soaring, and in other cities like Los Angeles, the apparel industry has experienced substantial growth in recent years. However, New Yorkâs long-dominant garment industry is shedding jobs and facing new threats to its future competitiveness.

To some extent, this decline is nothing new. Local garment contractors÷the businesses that handle most of the sewing and cutting of garments÷have been struggling to compete with cheaper overseas labor for decades. Yet New York firms have stayed in business by being able to respond quickly to changing fashion trends, thanks to the close proximity of retailers, designers, manufacturers, fabric suppliers and sewing contractors in the city.

But New York's apparel industry is now facing a new threat: Rapidly rising real estate prices that are pushing some firms out of the city and forcing others out of business. Meanwhile, city support to this vital sector has waned in recent years. This one-two punch--ceding the city's natural advantage of close connections between the design and production of garments and the failure of city officials to help the industry evolve to new economic realities--may cause New York to forfeit its fashion edge and lose thousands more jobs.

As part of a multi-year focus on New York's most vital economic sectors, the Center for an Urban Future conducted a three-month investigation of the city's fashion industry. The Center interviewed dozens of people working at New York fashion companies--from international designers to local sewing contractors--as well as union officials, city planners, economic development experts and representatives from industry associations.

The news isn't all bad. Apparel--with nearly 74,000 production jobs--remains the city's largest manufacturing industry, and the city's reputation as the place where fashions are launched has only been strengthened in recent years by the arrival of many trendy new downtown designers. More out-of-town buyers still come every year to New York's garment center showrooms to view new lines of merchandise than travel to any other American city.

However, apparel manufacturing, the most labor-intensive segment of the industry, is reeling. Local garment manufacturers and contractors have been losing business to cheaper labor in Asia, Latin America and other offshore locations for decades. Since 1968, the city has lost 182,000 apparel and textile manufacturing jobs. The most significant losses have occurred at firms that make mass-produced garments that can be ordered well in advance of the time they are needed in stores. And even more business may go overseas as a result of the Clinton Administration's recent trade agreement with China, which sets a 2005 deadline for ending American import quotas on Chinese textile products.

But local apparel companies have continued to thrive by producing garments that need to be turned around quickly for designers and retailers trying to stay on top of current fashion trends. Industry leaders say this kind of work will remain in New York because firms here have an inherent advantage: The close proximity between retailers, designers, suppliers and manufacturers in the city allows for quick production runs that can't be duplicated by overseas contractors and gives designers the ability to personally oversee the quality of production.

Today, however, many local apparel firms that have survived global pressures are losing their edge as they are displaced from the cityâs two main garment districts by the high price of real estate. "The prices are going up and people are getting pushed out," says Linda Dworak, executive director of the Garment Industry Development Corporation (GIDC), a nonprofit consortium of business, government and labor founded in 1984 to strengthen New York's fashion industry. "Companies are finding they can't afford to be where they are. They are moving to Long Island City or Sunset Park. And we're losing some to New Jersey too."

Many industry leaders fear that driving garment companies out of Manhattan--even simply to Brooklyn and Queens--will result in a loss of business for contractors who suddenly find themselves out of touch with their client base, and hurt designers' ability to ensure the quality of garments produced locally. New York's dominance of the fashion industry could be in danger.

These manufacturers are especially frustrated because they are supposed to have a measure of protection against the encroachment of office space. A 1987 law provides special zoning regulations for the garment district, requiring building owners to set aside 50 percent of all space on the garment centerâs side streets for manufacturing uses. But many garment firm owners and industry advocates believe that landlords are getting around these rules. According to a 1998 study for the Fashion Center Business Improvement District, only 38.8 percent of the businesses occupying space on side streets in the garment center were manufacturers. Area businesses say the number is even lower today.

While many garment companies have been able to relocate to the other boroughs, dozens of others simply declared bankruptcy or went out of business when their leases came due. In addition, a significant number of garment manufacturers decided to send their production work overseas and become apparel wholesalers. Doing so has enabled many companies to remain in New York, but it has come with a heavy price: Wholesalers generally have a fraction of the number of employees as manufacturing firms.

The dislocation of garment firms from Manhattan isn't all bad. It's helped to develop industrial areas in Brooklyn, Queens and the Bronx, which offer advantages over Manhattan, such as far cheaper real estate prices and less-congested streets for delivery trucks. And some neighborhoods, like Sunset Park, Brooklyn's fast-growing Mecca for apparel firms, boast a large pool of available workers.

But moving across the East River is no easy task. The firms that have made the jump to the other boroughs are encountering several problems. For one, many companies are simply having a hard time finding space. Local officials say that there are so few affordable industrial properties available in Sunset Park that it typically takes a year or two for companies to locate a suitable facility there. In East Williamsburg, another major hub for garment firms, space is drying up because numerous buildings zoned for manufacturing in the East Williamsburg In-Place Industrial Park are being converted illegally into residential lofts. And in Long Island City, one of the most desirable industrial areas outside of Manhattan, a number of apparel firms are being pushed out by landlords who want to replace them with higher-paying office tenants.

When they do find space in the other boroughs, garment firms--because most operate with low profit margins--often have trouble coming up with the large sums of money needed to move their equipment and inventory. Previously, firms could qualify for moving grants through the cityâs Business Retention Relocation Corporation. But the city let this important business retention program sunset in 1997.

The pressure on apparel has already had startling consequences. Between competition from abroad and the pressure to move, the city has lost 14,500 apparel and textile manufacturing jobs since 1993. These are positions that the city can ill afford to lose--jobs that provide vital employment and entrepreneurial opportunities, particularly for immigrants who lack the language skills or educational background to find employment in other sectors of New York's economy.

The city's apparel industry is also, of course, notorious for its many illegal sweatshops--factories that do not pay a legal wage to their mostly immigrant workforce. Undoubtedly, the prevalence of sweatshops has tarnished the industry and scared off potential business. However, this high-profile problem affects only part of the city's apparel industry. Garment firms here employ tens of thousands of workers--mostly immigrant women--in jobs that pay above minimum wage. The U.S. Labor Department estimates that the majority of the 74,000 workers they count as New York's apparel manufacturing workforce are at legitimate firms. While it is crucial that this issue be addressed, it should not be used as an excuse for not supporting this industry.

Importantly, the trends affecting the garment industry are not irreversible or inevitable. There was actually an increase in apparel manufacturing jobs in the city between 1996 and 1997--the first rise in 18 years. And in Los Angeles, the nation's other major garment center, the number of apparel and textile manufacturing jobs has risen by 22,600 since 1993, a 22 percent increase.

On the down side, City Hall has not recently demonstrated support for this important industry as it has the new media or financial industries. First, it has failed to address the growing space crunch affecting industrial businesses throughout the city or come up with a coherent strategy to help garment firms thrive and grow outside of Manhattan. Last year, the Giuliani Administration backed away from plans to develop the remaining 900,000 square feet of industrial space at the Brooklyn Army Terminal in Sunset Park, a project that could have created new space for several garment companies relocating from Manhattan.

In addition, the city has reduced its financial support for GIDC by six percent since 1993. While GIDC pulled in funding from other sources, it could clearly use additional resources to expand the services it offers. There are waiting lists for all of GIDCâs training courses and its limited staff enable it to provide on-site efficiency training services to just 35 firms a year--a fraction of the businesses that need this help.

On top of its general funding cuts, the Giuliani Administration compelled GIDC to pull the plug on a federally-funded program which retrained nearly 150 unemployed sewing machine operators each year. Its actions also forced the Fashion Center BID to withdraw financial support for several fashion initiatives, including a highly successful program that promotes New York companies to foreign markets. These funding cuts come at time when increased global competition and rising real estate prices highlight the need for more targeted assistance to the industry, not less.

While the city needs to turn around this trend, the biggest changes must be made by the industry itself. More companies are going to have to think globally and become more efficient to survive in this fast-changing, highly-competitive industry. And they will need outside assistance to make this happen.