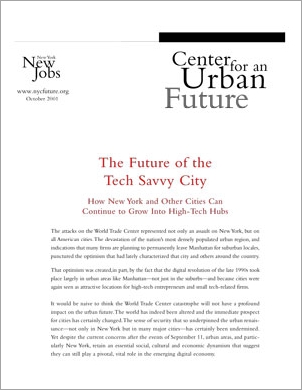 The Future of the Tech Savvy City

CUF Senior Fellow Joel Kotkin examines what New York and other urban centers must do to continue as "high-tech hubs."

The attacks on the World Trade Center represented not only an assault on New York, but on all American cities. The devastation of the nation's most densely populated urban region, and indications that many firms are planning to permanently leave Manhattan for suburban locales, punctured the optimism that had lately characterized that city and others around the country.

That optimism was created, in part, by the fact that the digital revolution of the late 1990s took place largely in urban areas like Manhattan—not just in the suburbs—and because cities were again seen as attractive locations for high-tech entrepreneurs and small tech-related firms.

It would be naive to think the World Trade Center catastrophe will not have a profound impact on the urban future. The world has indeed been altered and the immediate prospect for cities has certainly changed. The sense of security that so underpinned the urban renaissance—not only in New York but in many major cities—has certainly been undermined. Yet despite the current concerns after the events of September 11, urban areas, and particularly New York, retain an essential social, cultural and economic dynamism that suggest they can still play a pivotal, vital role in the emerging digital economy.

This report is an attempt to both look back at the recent success that New York and other cities had in developing vibrant tech districts and to look forward at the future of the tech savvy city. In doing so, it is important to note that urban areas successfully overcame numerous obstacles—-not to mention skepticism—-to get to where they where prior to September 11th.

In the mid-1970s, academics were predicting the "death of cities." At that time a different kind of terror—-that of crime and social disorder—-was the cause. The rapid increase in murder and theft starting in the 1960s drove millions of middle class residents and businesses out from the central core. Some center cities, such as Detroit and St. Louis, have never really recovered.

At the same time, however, a technological revolution was under way, principally occurring not in urban areas, but in sprawling suburban "nerdistans"—-places like Silicon Valley and Irvine, California, and Raleigh-Durham, North Carolina. High-tech firms were leaving the urban core at an even higher rate than companies in other industries, lured to the suburbs by lower crime and tax rates, and, most critically, the availability of needed employees.

In the late 1990s, cities saw a reduction in crime rates, and an upsurge in immigrant and childless adult populations. Certain elements of the information revolution, such as new media, the arts and high-end business services, again flocked to the densely populated urban core, and most particularly to New York. Similar phenomena, albeit on a somewhat less spectacular scale, occurred in cities as diverse as Chicago, Houston, Boston, Charlotte and Philadelphia.

Neighborhoods such as lower Manhattan, which seemed doomed to technological obsolescence, experienced an almost miraculous turnaround, while sections of other cities, including Los Angeles, Chicago, Boston, Washington, D.C., Seattle and San Francisco, enjoyed similar revivals. Surprisingly, one of the most important reasons for the resurgence of these cities has been the rise of the digital economy.

Unlike the earlier high-tech revolution, which involved the development and production of fiber optics and computer chips, the next wave in the digital era was shaped by a creative dynamic: the development of the Internet, and an accompanying demand for entertainment and other creative content.

This shift was made to order for urban areas. In fact, the first cities to see the full benefit of this transformation were those that traditionally held the strongest appeal for artists and other creative people. The steady increase in the migration of such well-educated, often young, frequently single people to selected urban centers, creating a "gene pool" of entrepreneurs and potential employees, has made the recent urban renaissance possible.

By 2001 New York and several other cities boasted burgeoning information age-oriented districts in which large tracts of largely empty second-class office buildings and formerly desolate warehouse and manufacturing space have been transformed into highly desirable, post-industrial hubs. As rents for both work and living spaces increased markedly in central business and residential districts, both firms and workers have moved into adjacent, formerly depressed areas, bringing large, moribund sections of the urban core back to life.

While the precipitous decline of the "dot-com" sectors in New York, San Francisco and other major cities has dampened enthusiasm for the information economy, the digital age is here to stay, and it will continue to be a driving force for entrepreneurship and business expansion in urban areas.

Yet not all cities will benefit to the same extent from the ongoing digital revolution. Leading tech centers will continue to compete with one another to retain and attract skilled knowledge workers—-a commodity that has been in short supply over the past few years. Some cities will thrive while others gradually fall behind.
Just as many old economy businesses have transformed themselves in order to participate in the new economy, city governments will have to alter their economic development policies to address the particular needs of high-tech firms. Instead of simply focusing on traditional programs designed to retain and attract large companies, cities must begin to focus more on retaining and attracting skilled employees. Those cities that maintain a high quality of life and encourage networking between digital-age entrepreneurs and other sectors of the economy are likely to do best in the post-industrial order.

Another important task of city governments, in the aftermath of the World Trade Center disaster and the mounting fear of future terrorist attacks will be to restore a sense of safety.

The attack is already prompting some companies to decentralize their operations in different locations. It is not be the first time that this has happened. Many firms cited the damage from the 1994 Northridge earthquake as reason to shift some facilities away from the California fault lines. After a respectable silence, industrial recruiters from Nevada, Arizona and Texas swooped into Southern California, using precisely these arguments. Several firms relocated some or all of their operations to “safer” geologic zones.

At a time when high-profile targets—-from office towers to large airports and, conceivably, even movie studios-—provide irresistible temptation for terrorists, location in the vast, unremarkable anonymity of the hinterlands could be seen as more attractive. Today, firms like Merrill Lynch, which maintained large offices both at the Trade Center and in more bucolic Princeton, New Jersey, are probably glad that they did not leave all of their key employees in Manhattan.

With their Manhattan centers destroyed, other companies and individuals—-including tech firms and in-demand tech workers—-may see dispersing as critical to their security. The past decade’s advances in telecommunications technology make decentralization far more workable than even a decade ago.

Fearful of being made targets, companies are now likely to seek safety in obscure locations. “If you’re looking for a new Chicago location, I don’t think you’d like to think about the hundredth floor of the Sears Tower,” suggests Matt Walton, President of E-Team, a provider of Net-based security and disaster services.

New York and other cities can overcome this by making sure businesses and individuals feel secure, by embracing the concept of decentralized business districts throughout the five boroughs and by investing in things that strengthen the grassroots economy.