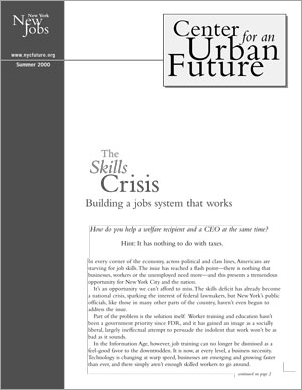 Amidst unprecedented economic growth, New York City remains unable to bring together employers, job trainers, and those left behind by prosperity and in need of training. Here's why.

How do you help a welfare recipient and a CEO at the same time?

Hint: It has nothing to do with taxes.

In every corner of the economy, across political and class lines, Americans are starving for job skills. The issue has reached a flash point-there is nothing that businesses, workers or the unemployed need more-and this presents a tremendous opportunity for New York City and the nation.

It's an opportunity we can't afford to miss. The skills deficit has already become a national crisis, sparking the interest of federal lawmakers, but New York's public officials, like those in many other parts of the country, haven't even begun to address the issue.

Part of the problem is the solution itself: Worker training and education hasn't been a government priority since FDR, and it has gained an image as a socially liberal, largely ineffectual attempt to persuade the indolent that work won't be as bad as it sounds.

In the Information Age, however, job training can no longer be dismissed as a feel-good favor to the downtrodden. It is now, at every level, a business necessity. Technology is changing at warp speed, businesses are emerging and growing faster than ever, and there simply aren't enough skilled workers to go around.

Desperate companies are offering higher and higher salaries to qualified workers, and using every means at their disposal to fill vacancies-including lobbying Congress to import skilled workers from overseas. The welfare rolls have shrunk dramatically, but many of those entering the workforce remain in poverty because they don't have the skills to fill jobs that pay decent wages. And millions of Americans are losing ground by the day because they cannot keep up with industry innovations and technological advances on their own; instead of moving up, they are stalling out, and as they get left behind, so do the companies they work for.

"The truth is, employers are hiring a lot of people without the right skills, and they're limping along," says Mark Elliott of Public/Private Ventures, a policy institute focusing on workforce development issues.

It's hard to compete in the global economy if you're hobbled by a lame workforce.

Most importantly, this problem will not go away. In an era defined by technological innovation and advances, the demand for skilled workers promises to only grow over time. And nowhere is the skills crisis hitting harder than New York City where our new economy features the nation's steepest wage disparities and persistently high rates of poverty. Yet instead of facing the problem, officials in Albany and City Hall are studiously ignoring it.

Instead of expanding and improving skill-building services, the city has concentrated them in the hands of an agency mired in contracting scandals. And, in the federal government's view, New York has not complied with the new federal Workforce Investment Act, under which New York should have had a whole new skill-building system up and running by July 1. New York City welfare officials have refused even to begin the planning process-and hundreds of millions of dollars in federal funding are now in jeopardy as a result.

This lack of response to a direct call to action suggests that our leaders simply do not take the issue seriously-and that they fail to understand the consequences of disregarding it.

There are other states, however, that understand the implications of our nation's skills crisis. And their leaders are working aggressively to solve the problems on behalf of their workers and their businesses.

Indiana recognized that if it didn't close its skills gap, it would not be able to sustain its recent economic growth, so it set out to create a more educated workforce. Toward that end, it has offered to subsidize college courses, GED classes, approved certification programs and approved apprenticeships for 100 percent of its workers.

Texas has capitalized on its success in reducing its welfare rolls by taking its resulting Temporary Assistance to Needy Families (TANF) surplus funds and pouring them into the next phase: workforce development. It has cleaned up its formerly incoherent, inefficient system and fostered a slew of responsive, service-based local agencies that do whatever is necessary to help workers and employers connect successfully.

New York cannot rest on its economic laurels or become complacent over its accomplishments with welfare. As Indiana and Texas recognized, these successes will not last long if government fails to take the next step. We must begin this work today.