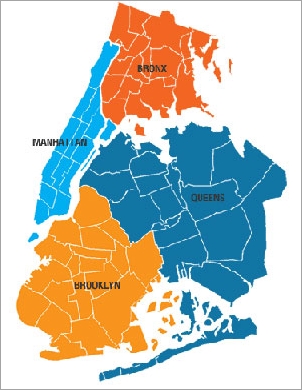 The city says the new landscape of historically industrial areas of Williamsburg will be "mixed use." But high-priced housing won't just sound the death knell for existing industry--it will weaken New York's economy, too.

In the "mixed use" neighborhood of Greenpoint-Williamsburg, industry may not be in the mix much longer.

Under the rezoning framework, representatives of the Department of City Planning announced to a crowd of hundreds at Greenpoint's Polish & Slavic Center this past summer, large portions of this neighborhood are slated to receive the city's new "MX" zoning designation--a change that seems conceived to encourage industry in Greenpoint-Williamsburg to fade quietly away.

While the new mixed-use designation theoretically allows industry to remain in these areas, it also lets property owners convert manufacturing spaces to non-industrial uses whenever they wish, or "as-of-right"--a shift from the old system, under which such conversions were restricted to one degree or another. With this change, industrial occupants will undoubtedly be driven out by more lucrative residential, office or retail uses.

If they allow Greenpoint-Williamsburg--where manufacturing, warehousing and transportation uses have traditionally blended with retail, housing and offices--to be overtaken by a more expensive, less diverse type of mixed use, city officials are making an economic mistake that they might never be able to reverse. This is because Greenpoint-Williamsburg is just the type of neighborhood in which light, clean, specialized industry can thrive--helping to make the city's economy more diverse and more competitive overall.

To understand what makes Greenpoint-Williamsburg so good for light manufacturers, it helps to consider its history. With the decline of New York's role in the regional maritime economy, manufacturing companies streamed out of the city in the second half of the 20th century, seeking cheaper land, utilities and labor. After a century of vitality, heavy industry in Greenpoint and Williamsburg plummeted--blessedly from the perspective of residents who had suffered from the pollution and noise produced by "dirty" industrial uses. Some parts of Greenpoint and Williamsburg, however, survived as mixed-use communities, with apartment buildings, retail strips and light industry interspersed.

In the 1970s and 1980s, factory lofts began to be occupied by smaller, custom producers catering to niche consumer markets such as custom furnishings, specialty food and fashion apparel. Observers grew to believe that the persistent success of food firms such as the Brooklyn Brewery and music equipment specialists like Frantone Electronics showed that some kinds of industry could thrive in Greenpoint-Williamsburg and other mixed-use districts just across the river from Manhattan. In fact, some industry depended on these neighborhoods' eclectic, creative character and their proximity to markets.

In the early 1990s, the resurgence of light industry in mixed-use outer-borough neighborhoods began to draw notice. The Department of City Planning's 1993 Citywide Industry Study acknowledged this seeming paradox: The densest, most vibrant concentrations of industrial jobs outside of Manhattan were not in the "modern," suburban-style, low-rent industrial parks that the city had created in eastern Brooklyn and Queens and the north Bronx, but in higher-cost mixed-use areas in western Brooklyn and Queens--areas where crime was low, where creative people wanted to live, where Manhattan was a short truck trip or a subway stop away. The study also cautioned that "strong industrial areas where growth is occurring also tend to attract investment from the commercial and/or residential sectors, leading to competition for the land located in the manufacturing-zoned areas."

The juxtaposition of light industry to residential and commercial uses in Greenpoint-Williamsburg during this period was not only good for manufacturing; it was also welcomed by the area's other occupants. Community plans published by residents in the late 1990s cited job-creating light industry as a logical complement to residential and commercial uses, and urged planning officials to ensure that non-polluting industrial uses could remain.

So why the change to "MX" in Greenpoint-Williamsburg? The decision stems, at least in part, from a widely shared philosophy that holds that the city's future prosperity lies in the expansion of pricey residential enclaves and office districts, and that many mixed-use neighborhoods, particularly those closest to Manhattan's central business district, are undergoing an inevitable, unstoppable transformation that entails the dispersal or disappearance of their industrial land uses. Dozens of "commonsense" outlets, from the business press to the advertising materials of local economic development agencies, advance the idea that land and buildings should operate as pure commodities and that local officials must do everything possible to facilitate the extraction of value from them--that is, to promote their "highest and best use."

It is true that the high price of land in the city leads developers to seek out the highest possible return on their money, which, particularly in and near the central business districts, tends to involve either commercial or high-end residential development. But there is a chicken-and-egg issue here. One reason these uses are most profitable is because the city supports this trend. It does so by offering a generous array of subsidies, incentives and low-interest loans to developers of high-end residential and commercial properties. Allowing industry to be displaced by other land uses, as will occur in the new "MX" zones, is typically referred to as "letting the market alone." But that characterization is inaccurate, since the city intervenes plenty to create the conditions under which developers will build office space and luxury housing. This raises a question: Is industry really dying a natural death, propelled by inescapable market forces, or has it simply failed to gain the favor of policymakers who are constantly intervening in the development marketplace, promoting some uses at the expense of others?

Indeed, in Greenpoint-Williamsburg itself, by declining to respond to the real-estate dynamics the 1993 industry study predicted, planning and economic-development officials have arguably exacerbated market forces. With rumors of rezoning in the air, the potential financial value of loft and even one-story industrial buildings as residential and retail properties so outstripped their value as industrial parcels in the mid-1990s that developers and owners discouraged otherwise viable industrial tenants from remaining, and sometimes even evicted them outright. Industrial firms were given month-to-month leases or faced skyrocketing rents. When firms left voluntarily, property owners kept the land off the market in anticipation of selling to residential developers at a windfall. Industrial firms that sought to expand were quoted exorbitant prices. On top of this came the conversion phenomenon: Although the development of residential units in industrial zones was technically prohibited by the zoning code, developers bid for and acquired industrial property at prices more applicable to residential property. Their often-accurate assumption was that that they would succeed in obtaining variances--exceptions to the zoning code--from the mayorally appointed Board of Standards and Appeals.

City officials (in the Department of Buildings and the BSA) might have curbed these practices. But they did not--probably, in part, because the "industry is dead in New York" theory dominated minds of local opinion-makers.

Zoning tools are available that could support industry without sacrificing residential and office expansion. Groups like the Brooklyn Coalition for Equitable Development, drawing on research done at Pratt Institute, the New York Industrial Retention Network and elsewhere, have argued for a so-called "sustainable" or "non-transitional" mixed-use zone that gives stricter protection to industrial properties. This zoning would make it harder for the owner of a loft building to evict manufacturing tenants, and would provide a modicum of security and stability to industrial users when it comes to rents. A similar measure has been successfully implemented in the King-Spadina district of Toronto. BCED also advocates more concerted efforts to develop and nurture new industry in mixed-use areas. Projects like the Brooklyn Navy Yard (vacancy 2 percent), the Brooklyn Army Terminal (vacancy 5 percent) and the Greenpoint Manufacturing and Design Center (no vacancy) demonstrate that when city officials or nonprofits sponsor industrial development, they can produce vacancy rates lower than those in many office markets.

But subscribers to the so-called "highest and best use" philosophy would argue that if the "MX" designation is indeed the death knell of light industry in Greenpoint-Williamsburg and other mixed-use communities, we are silly to care. According to them, the city's industrial base is little more than a relic, any factory is more effectively used as housing or offices because those uses yield more rent, and we would do better to sever our sentimental attachment to the city's industrial past. From the perspective of real-estate value, this makes perfect sense. However, there are other ways to imagine the future--and there are compelling economic reasons to do so.

First, connections between industry and sectors such as tourism, finance, fashion and the arts are hard to ignore. Firms in mixed-use areas supply these sectors with products that would often cost more if obtained from outside the city, and that sometimes are difficult to substitute. Allowing service sectors to displace industry altogether could, paradoxically, make service sectors less competitive.

Second, mixed-use neighborhoods that include light industry are arguably more effective than homogeneous communities at attracting creative, entrepreneurial people to the city. The mass migration of artists, performers and other "creatives" to Greenpoint-Williamsburg offers evidence that innovative, entrepreneurial professionals, even if they work in service industries, want to live near a variety of activities. But as professionals who can pay high rents increasingly seek out the eclecticism of a community that houses restaurants, construction contractors, artists in residence, and makers of high-concept lighting fixtures, the mixed-use (and mixed-income) character of that community becomes less stable. Many residents and firms that imparted a distinctive character to Williamsburg's Northside neighborhood have already been driven away by rising rents, congestion and other costs.

Finally, while the city before the recession of the early 1990s seemed securely specialized in finance and business services, the recovery of these sectors during the post-recession boom did not bring employment levels to what they had been in the late 1980s. Finance and advanced services are more significant in New York City's economy today not because they have grown in absolute terms, but because with the depletion of industry they have increased as a proportion of total economic activity. Thus, it might pay to think about nurturing light industry that has a competitive advantage here, such as design-oriented manufacturing. It might even pay to protect this type of industry from the real-estate pressures that threaten to eradicate it. Many in the economic-development field go to great lengths to develop from scratch the sorts of "industrial enclaves" that characterized Greenpoint-Williamsburg in the mid-1990s, and which continue in a muted form today against market odds.

For all these reasons, advocates would like the city to apply land-use and economic-development policy differently in Greenpoint-Williamsburg--to see zoning that, unlike "MX," acknowledges the role that industry plays in a mixed-use neighborhood. Based on his comments in the press, it appears that the city's deputy mayor of economic development and rebuilding, Daniel L. Doctoroff, concurs that a development policy that keeps industry in the mix is a smart choice for the city. But officials should move quickly. Already, in response to rising residential rents in western Williamsburg, middle--and working-class tenants have indicated to landlords their willingness to live illegally on industrial real estate in East Williamsburg--until recently a solidly industrial area. Although East Williamsburg is not being officially rezoned, deindustrialization will occur there without deliberate policies to prevent it.

Policies to increase the viability of industry in the mixed-use neighborhoods where it has the greatest chance of thriving should be a high priority for city officials. The fact that these neighborhoods are also appealing spots for high-end residential and commercial development makes the challenge harder--but it is a challenge that should not be ignored.