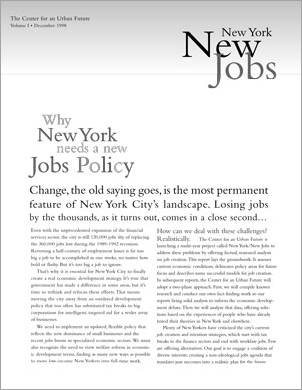 Change, the old saying goes, is the most permanent feature of New York City’s landscape. Losing jobs by the thousands, as it turns out, comes in a close second…

Even with the unprecedented expansion of the financial services sector, the city is still 120,000 jobs shy of replacing the 360,000 jobs lost during the 1989-1992 recession.

That’s why it is essential for New York City to finally create a real economic development strategy. It’s true that government has made a difference in some areas, but it’s time to rethink and refocus these efforts. That means moving the city away from an outdated development policy that too often has substituted tax breaks to big corporations for intelligent, targeted aid for a wider array of businesses.

We need to implement an updated, flexible policy that reflects the new dominance of small businesses and the recent jobs boom in specialized economic sectors. We must also recognize the need to view welfare reform in economic development terms, finding as many new ways as possible to move low-income New Yorkers into full-time work.

How can we deal with these challenges?

Realistically. The Center for an Urban Future is launching a multi-year project called New York/New Jobs to address these problems by offering factual, reasoned analysis on job creation. This report lays the groundwork: It assesses current economic conditions, delineates policy areas for future focus and describes some successful models for job creation. In subsequent reports, the Center for an Urban Future will adopt a two-phase approach. First, we will compile known research and conduct our own fact-finding work so our reports bring solid analysis to inform the economic development debate. Then we will analyze that data, offering solutions based on the experiences of people who have already tested their theories in New York and elsewhere.

Plenty of New Yorkers have criticized the city’s current job creation and retention strategies, which start with tax breaks to the finance sectors and end with workfare jobs. Few are offering alternatives. Our goal is to engage a coalition of diverse interests, creating a non-ideological jobs agenda that translates past successes into a realistic plan for the future.

Over the past year, the Center for an Urban Future has conducted dozens of site visits and more than 100 interviews to find local solutions to New York City’s job quandary. We discovered that New York’s business and nonprofit sectors have been quietly developing effective middle income job creation strategies and are successfully placing low-income people in permanent jobs. But these neighborhood-based and industry-driven innovations have been
largely overlooked by the people guiding the region’s economic development policy.

That’s understandable. After all, the city’s economy has soared in recent years and it has become easy to believe that the problems of chronic unemployment have faded away in this prosperous era. We’d all love to live in a Golden Age, but the reality is that the Wall Street boom has masked structural flaws in the economy. Inevitably, the financial markets will cool down and job losses will resume.

During the boom, unemployment rates have remained high.

New York City’s dependence on the financial services sector has reached a dangerous and unsustainable extreme. Despite employing only 5 percent of the workforce, the securities industry, by one analysis, has accounted for half of the increase in real earnings between 1992 and 1997. This windfall has spurred city tax revenues toward budget surpluses that topped $3 billion in the past two fiscal years—-and driven half of all new job growth between 1995 and 1997, especially in sectors like restaurants and retail that benefit from heavy spending. But as everyone knows by now, the finance industry is bracing for a downturn. The city’s own analysts forecast Wall Street profits to fall by $4.2 billion in this year alone.

The middle class is still being squeezed out of the city.

For the first time in the city’s history, the size of the middle class has actually declined during an economic boom, falling from a high of 35 percent of the population in 1989 to 29 percent today. Income inequality in New York State is the highest in the country—the gap between the top fifth of income earners in the state and the bottom fifth grew by 127 percent since the 1970s.

At least 150,000 unskilled workers will soon enter the workforce.

Currently, New York City has more than 740,000 people on welfare and the mayor has vowed that anyone the city deems employable-—at least 150,000 people-—will be working in private-sector or workfare jobs by 2001. How those people will find work, or whom they might displace, are issues that neither the city nor the business community has seriously explored.

Obviously, no one can blame all of these problems on government, but the city has failed to do enough to promote healthy employment growth over the long haul. New York has a powerful arsenal of economic development and human service agencies. Yet officials there have aimed both too high and too low, missing the mark of middle-income job growth.