The recent tragedy in the East Village brought renewed attention to the city’s infrastructure. And while aging gas mains and service lines remain an issue, both Con Edison and National Grid have significantly improved the safety and efficiency of the distribution system in recent years.

Just one year after the fatal gas explosion in East Harlem, another tragedy has struck New York. While investigations are still in their infancy, preliminary evidence suggests the East Village fire was also prompted by a gas leak.

The incident appears to have originated inside the building, beyond the utility company’s direct jurisdiction. The event offers an important lesson for city officials and the public: utility provision does not end at the meter, but is carried by lines inside buildings that are managed and maintained by landlords and homeowners. While service is often associated with large agencies, authorities and corporations, the distribution of gas (as well as water, electric and broadband) is, in fact, quite decentralized. Moving forward, the city must address its aging infrastructure both inside and outside of buildings.

As documented in our Caution Ahead report last year, New York City’s gas infrastructure is indeed old. Of the 6,400 miles of main running beneath our streets, 53 percent were installed prior to 1960. These mains distribute gas to New York’s businesses and residences via service lines, connected to nearly every building in the city. It is these lines, whether due to corrosion or improper installation, where dangerous gas leaks most often originate. Of the 814,892 services in the city, 93,187 are over 55 years old.

Though gas leaks remain a daily occurrence in New York, the city’s providers—Con Edison and National Grid—have significantly improved the safety and efficiency of the distribution system in recent years. In 2003, there were 14,050 leaks across their respective service areas (which, for Con Edison, includes Westchester). By 2012, the number of leaks fell to 9,871, a 30 percent drop.

The decline in leaks is prompted not by happenstance, of course, but a consistent—if still insufficient—effort to replace old and vulnerable pipes by both Con Edison and National Grid. Unprotected steel and cast iron lines, identified as leak prone materials by the federal Pipeline and Hazardous Materials Safety Administration, have been singled out for removal. From 2003 to 2012, the share of gas mains composed of these materials fell from 61 percent to 52 percent and the share of service lines fell from 19 percent to 14 percent. As a result, the number of leaks credited specifically to corrosion fell even faster than the overall leak rate, from 6,265 to 3,947, a 37 percent drop.

Aging infrastructure, of course, is not unique to New York’s gas companies. Across the city, 184 bridges and approximately 1,000 miles of water mains are over 100 years old. At the MTA, 269 miles of the subway’s signal system, which govern the movement of trains, exceed their 50 year useful life.

Last year, Mayor de Blasio convened the Underground Infrastructure Working Group. The city’s public and private utility companies met with the agencies responsible for managing our streets—the City Department of Transportation and the Department of Design and Construction—to improve access to aging gas, water, sewer, electric and telecommunication lines for inspection, maintenance, and replacement. These entities should move forward with reforms and commit more resources to replacing and maintaining utility infrastructure. This will not be possible without a stronger financial commitment in both the state and city budget.

Additionally, the mayor should convene a second working group of utility companies, private contractors, relevant unions, prominent building managers and the city’s Department of Buildings and Department of Housing Preservation and Development. The delivery of gas, water and broadband does not end at the meter, but is managed by a complex and decentralized network of stakeholders. Improving the inspection, maintenance and replacement of aging infrastructure must occur both inside and outside of the city’s buildings. 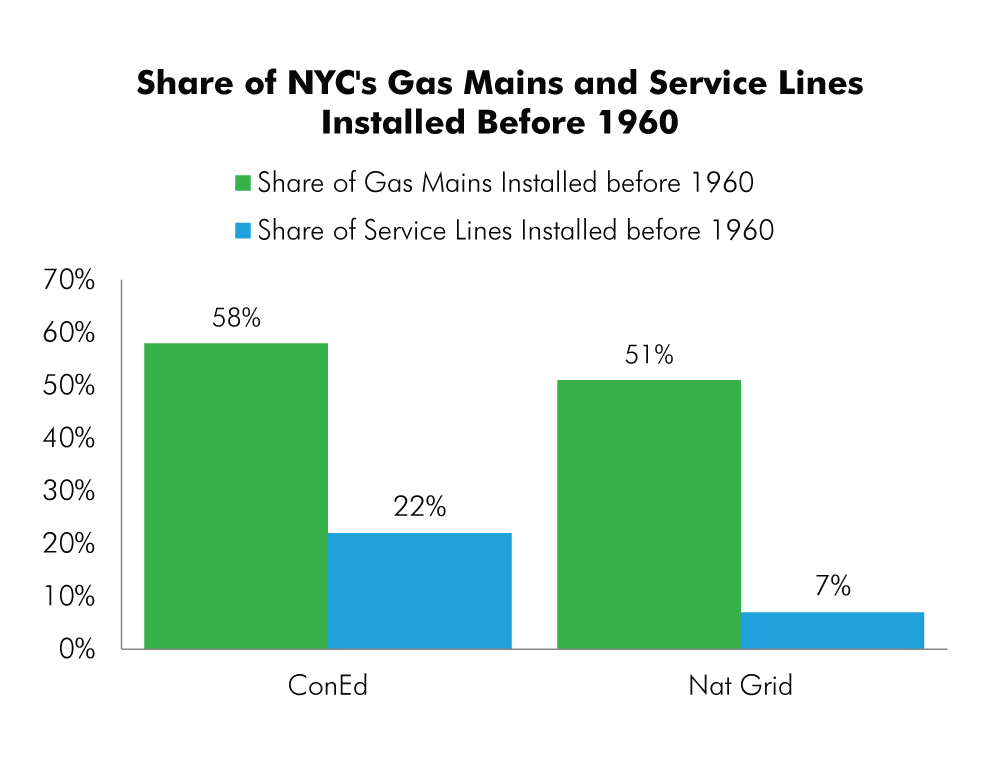 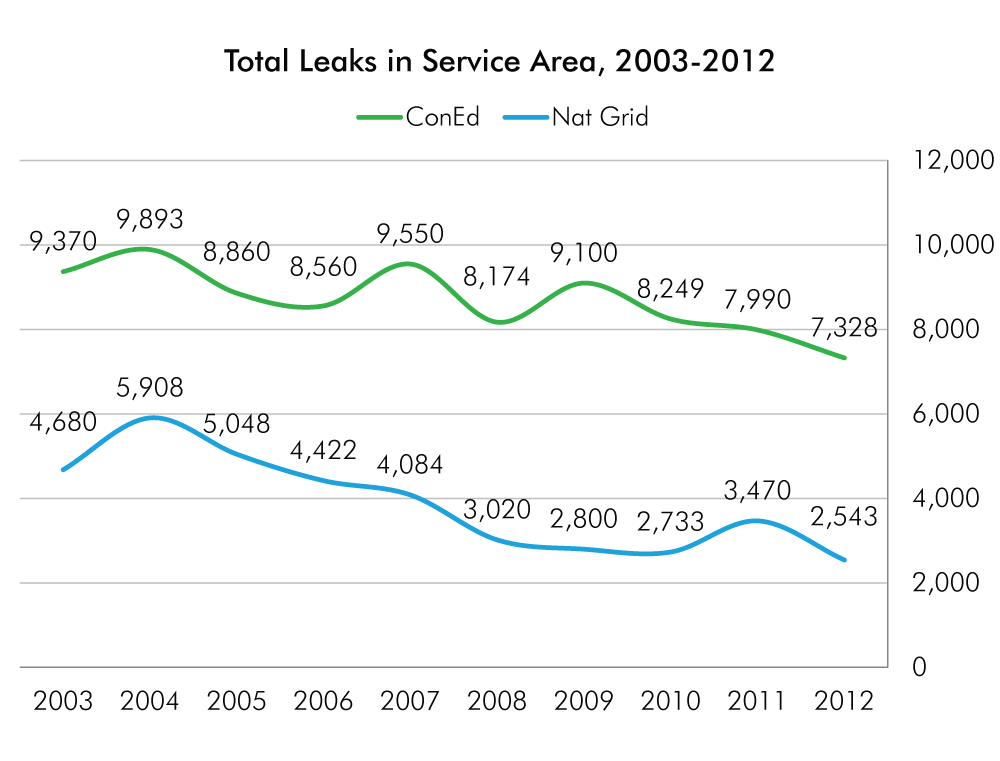 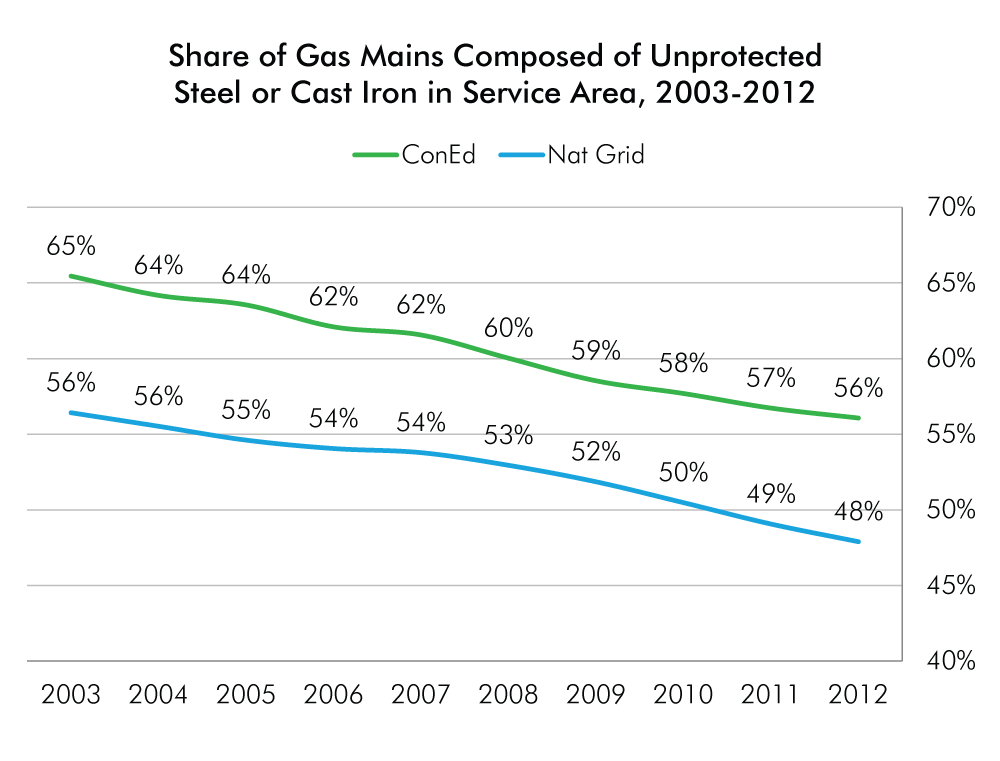 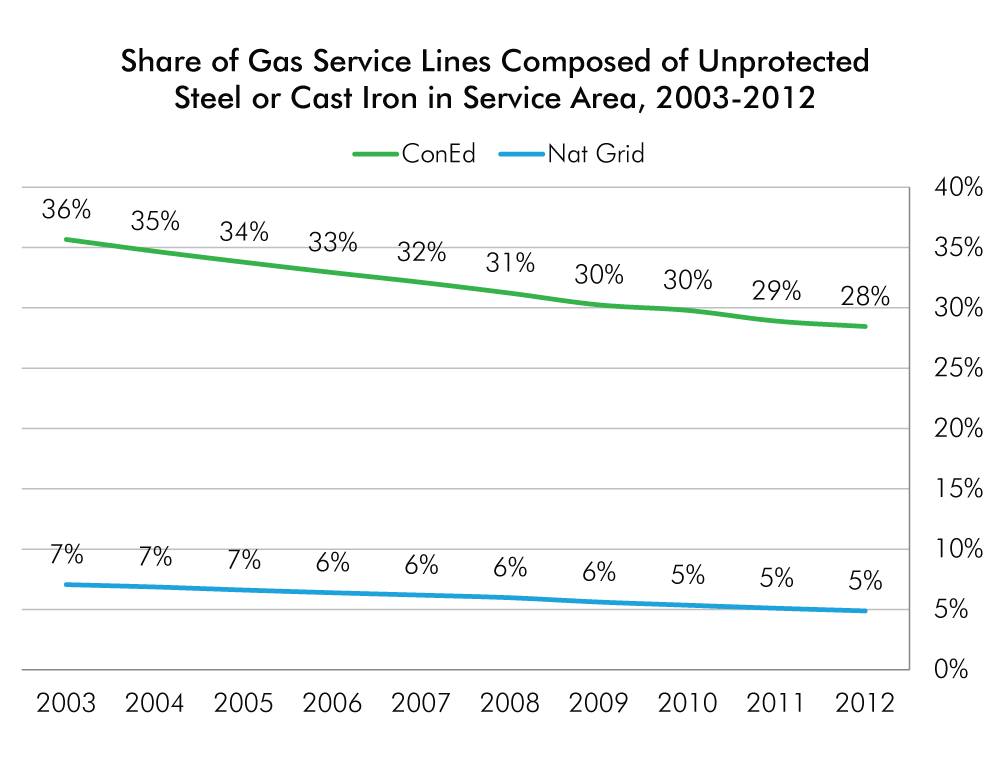 This data analysis was researched and written by Adam Forman and edited by Jonathan Bowles. Design by Amy Parker.

General operating support for Center for an Urban Fu­ture has been provided by the Bernard F. and Alva B. Gimbel Foundation, Fund for the City of New York and the Lucius N. Littauer Foundation.


In wake of explosion, new scrutiny of city’s gas lines

Investigators now focusing on cause of E. Village blast after bodies recovered