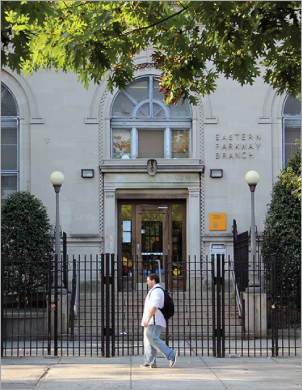 Our second annual assessment of library hours in New York shows that 40 percent more branch libraries in NYC are open at least six days a week than this time last year. But while city libraries are open an average of 4 hours more per week than a year ago, they still lag behind many of the largest library systems in the state and nation in hours of operation.

New York City’s public libraries are now open nearly four hours more per week on average than this time last year, and are no longer next to last in average hours of operation among the state’s largest counties. But while virtually all library branches in the five boroughs are now open six days a week—thanks to the $43 million increase in operating funds for libraries that was agreed to by Mayor de Blasio and the City Council last June—New York City’s libraries are still open fewer hours than most of the largest library systems in the state and the nation.

Our second annual assessment of library hours in New York State shows that New York City’s public libraries are now open an average of 48.4 hours per week, a notable increase from this time last year, when the city’s libraries were open 44.7 hours a week on average. Moreover, 99 percent of the city’s branch libraries are now open 6 days a week, up from 67 percent a year ago. The biggest changes occurred in Queens and Brooklyn. Last year at this time, just 29 percent of library branches in Queens and 64 percent of branches in Brooklyn were open at least six days a week; today, 98 percent of branches in both Queens and Brooklyn are open six days a week.

The increase in library hours—made possible by last June’s historic increase in city operating support for the city’s three public library systems—has provided a huge boost to New Yorkers, who are increasingly turning to library branches to gain the essential literacy, language and technological skills needed in today’s economy. Simply put, more branches are now open more days and longer hours, enabling adults to upgrade their skills and find jobs, helping immigrants learn English, fostering reading skills in young people and providing technology access for those who don’t have a computer or an Internet connection at home.

This data brief is based on an assessment of posted library hours that we conducted in February and March of 2016. 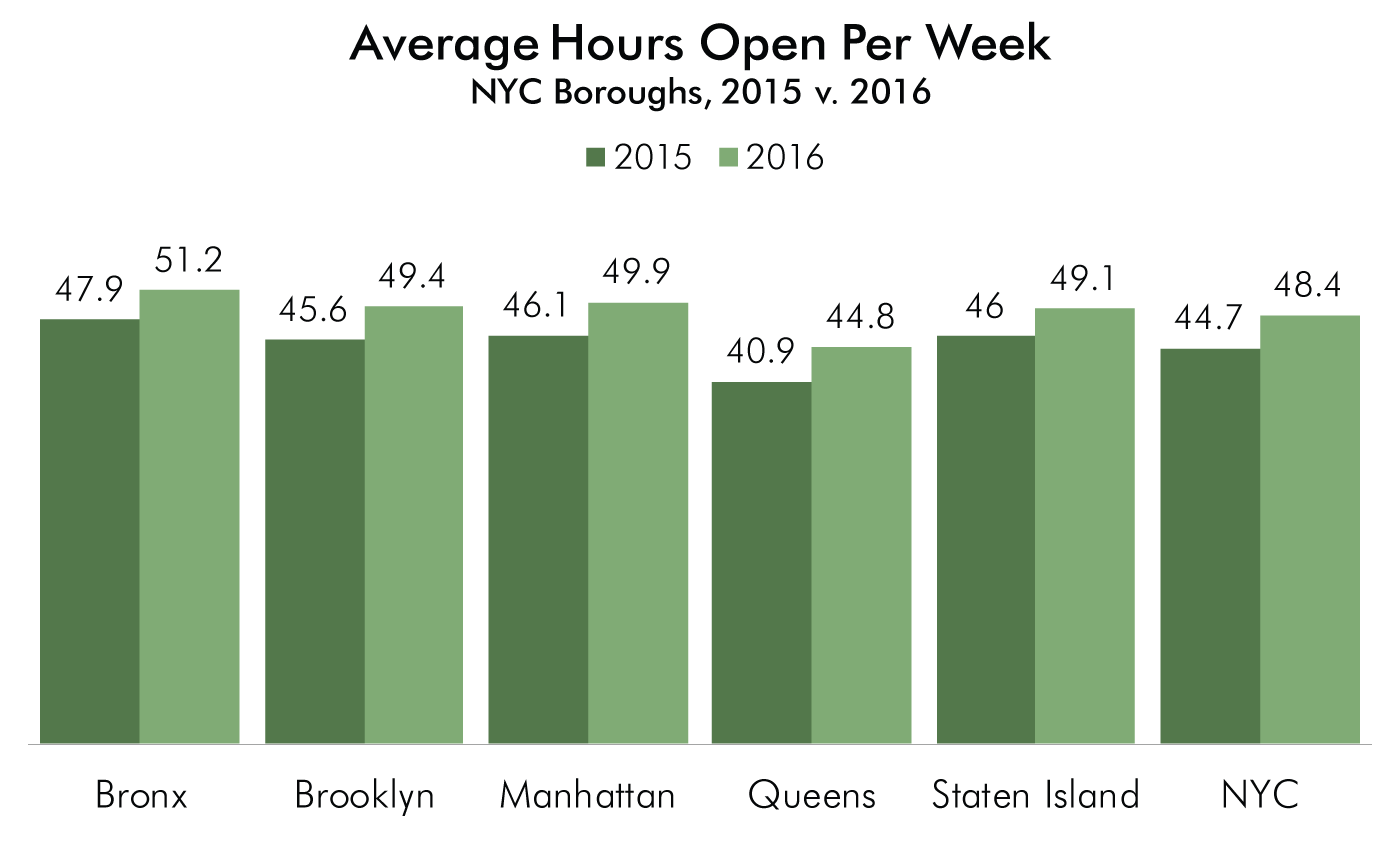 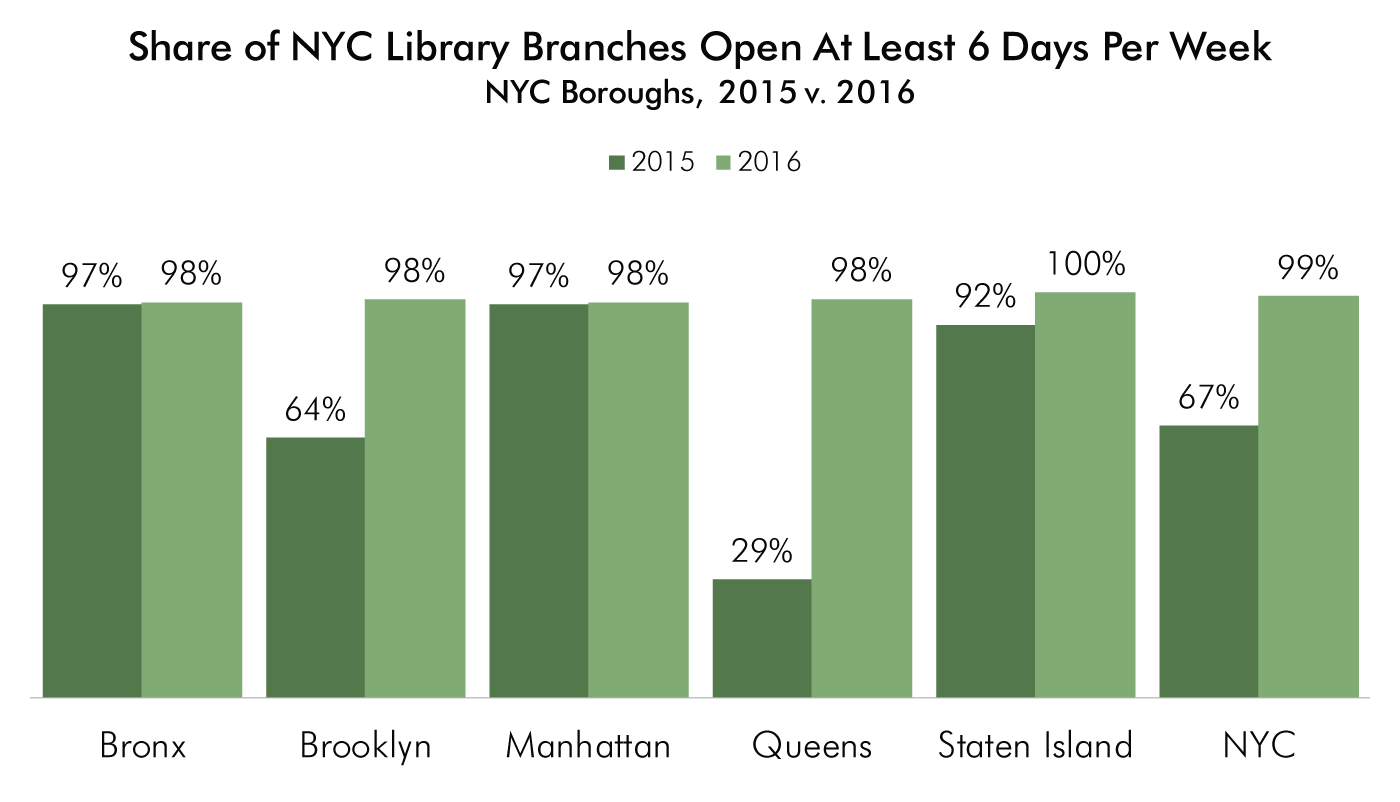 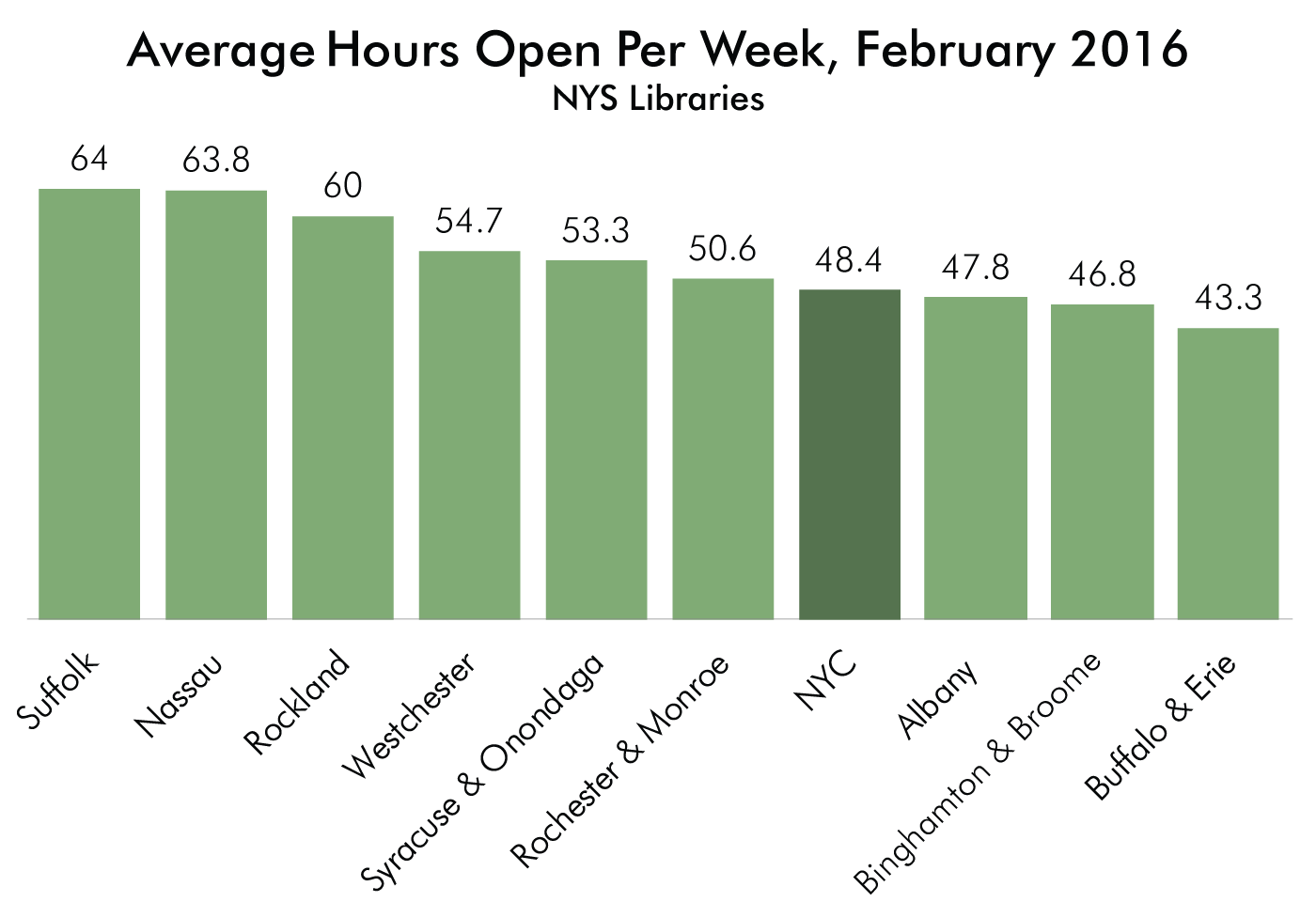 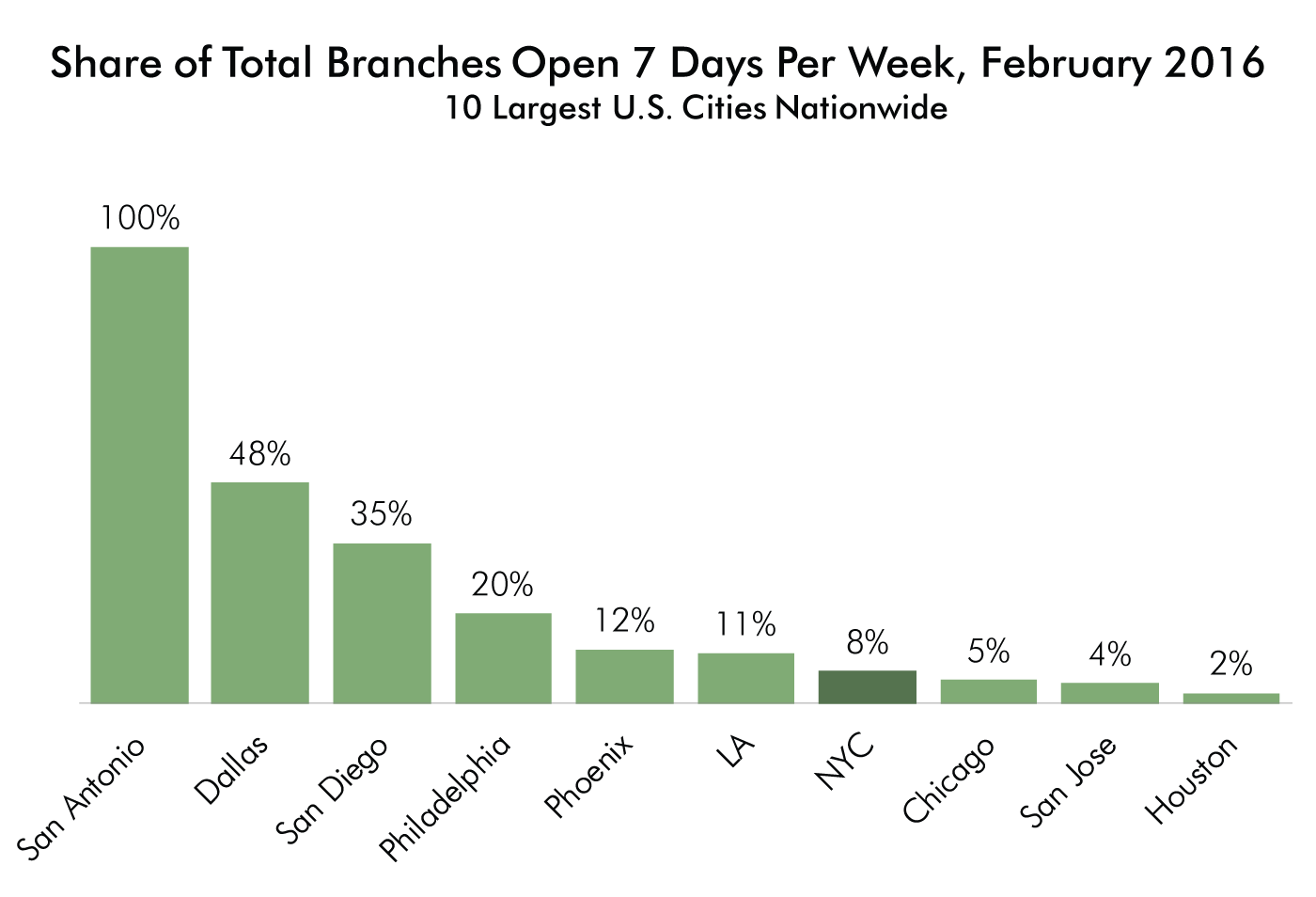 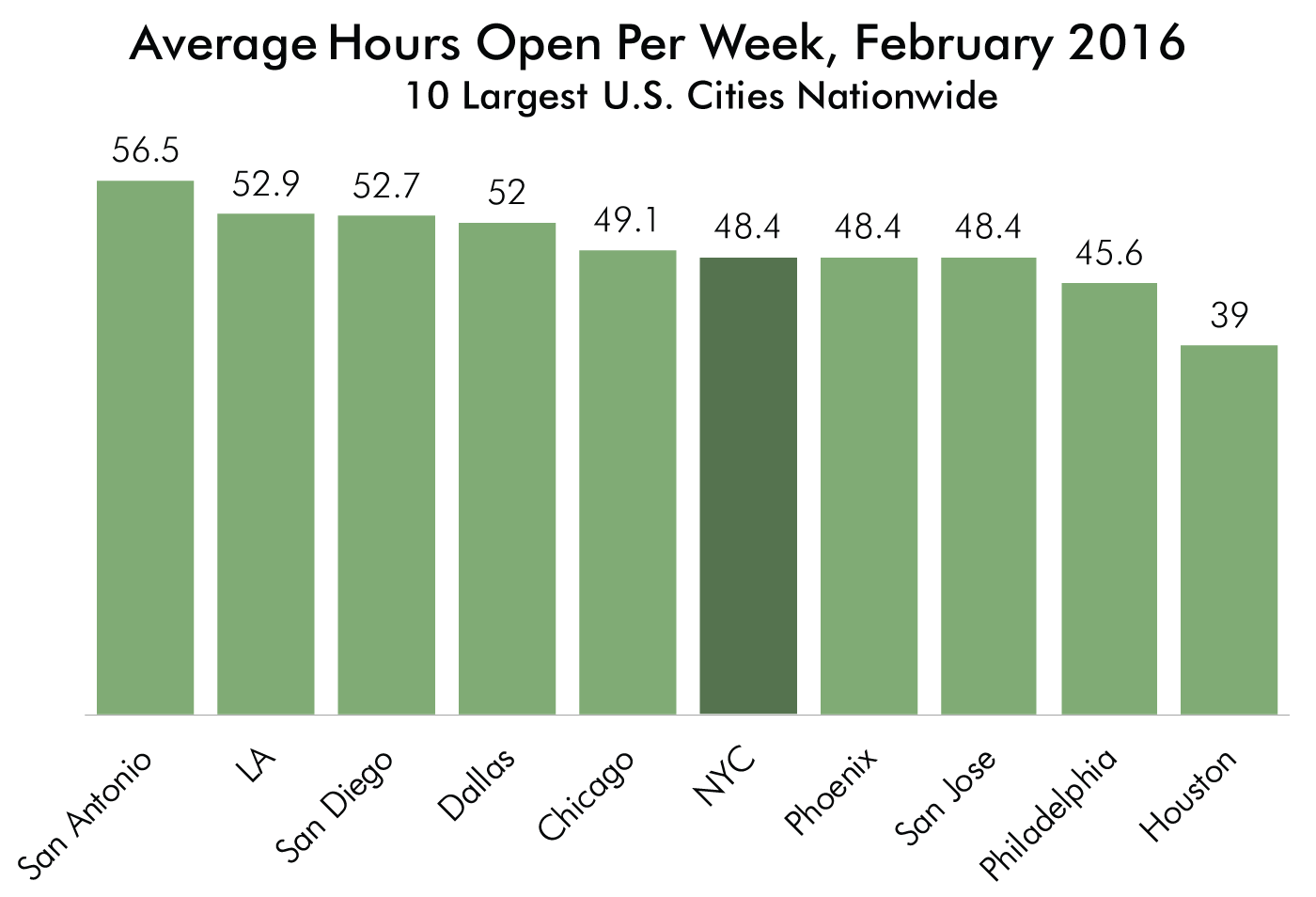 LIBRARY TIMES ARE A-CHANGIN' is a publication of the Center for an Urban Future written by Jonathan Bowles, researched by Kathleen Gorman and designed by Amy Parker.