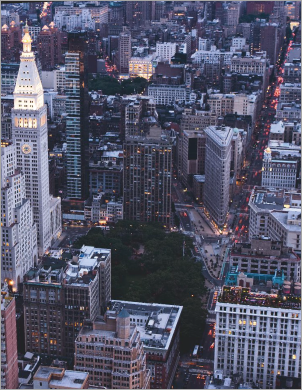 While there’s no debating the meteoric rise of New York City’s tech sector over the past decade, an accurate and representative measurement of employment in the tech sector has proven elusive. Last month, however, the Federal Reserve Bank of New York published a new report that arguably provides the most accurate measurement of the city’s tech sector, using a definition that is limited to seven industries "in which firms use technology as their core business strategy."1

In this analysis, we use the Fed’s definition as a jumping off point to provide a more complete portrait of New York’s tech sector. Our analysis documents which boroughs have experienced the fastest tech growth, which tech subsectors have the most jobs and how employment in the sector breaks down by age, gender and race/ethnicity.

Like the New York Fed, our data draws primarily from the Department of Labor’s Quarterly Census of Employment and Wages. However, while the Fed accessed this data through the Moody’s Economy.com database, we used the Economic Modeling Specialists International portal because it provides demographic and self-employment figures. Any small variations in the data are due to the different databases.

1 Undoubtedly, the number of people working in technology jobs goes well beyond those employed in the seven industries that make up the “tech sector”. Indeed, businesses in most industries today are integrating technology into their operations. This analysis focuses on only the more narrow “tech sector” to better understand trends occurring at companies that "use technology as their core business strategy.” 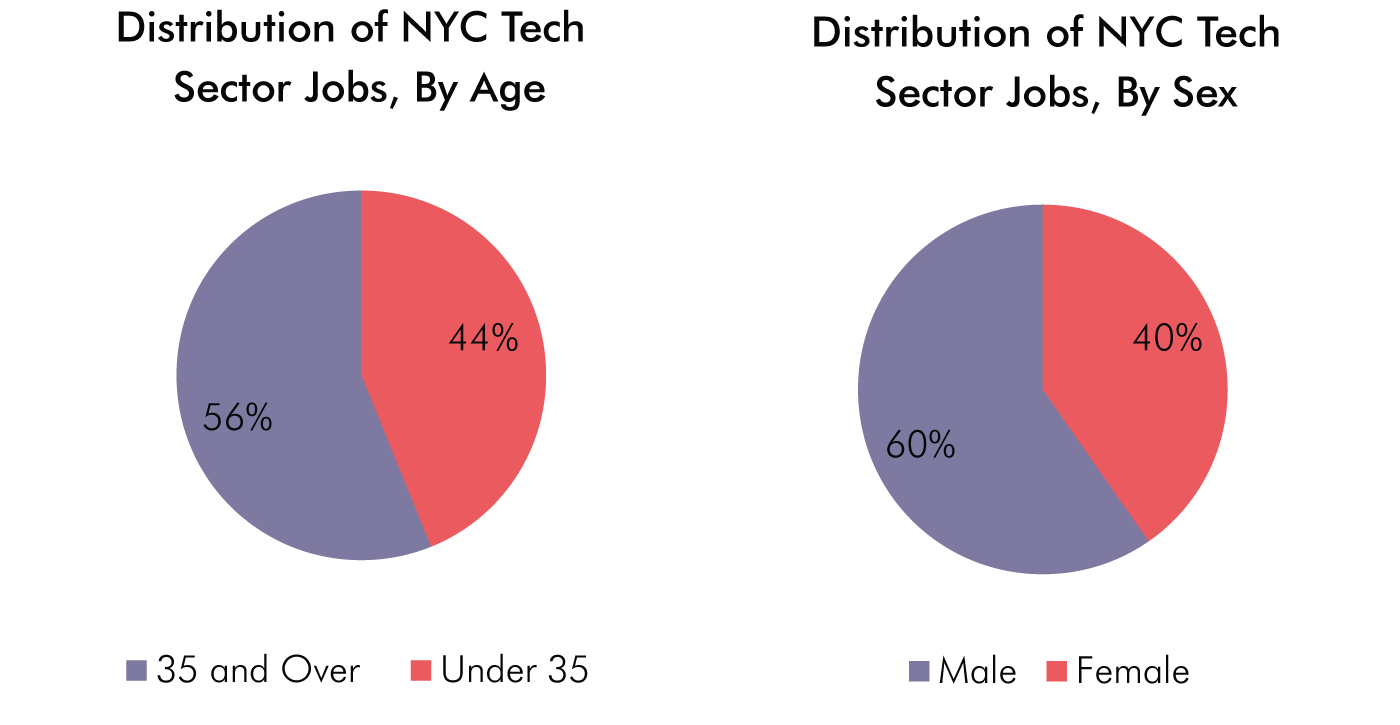 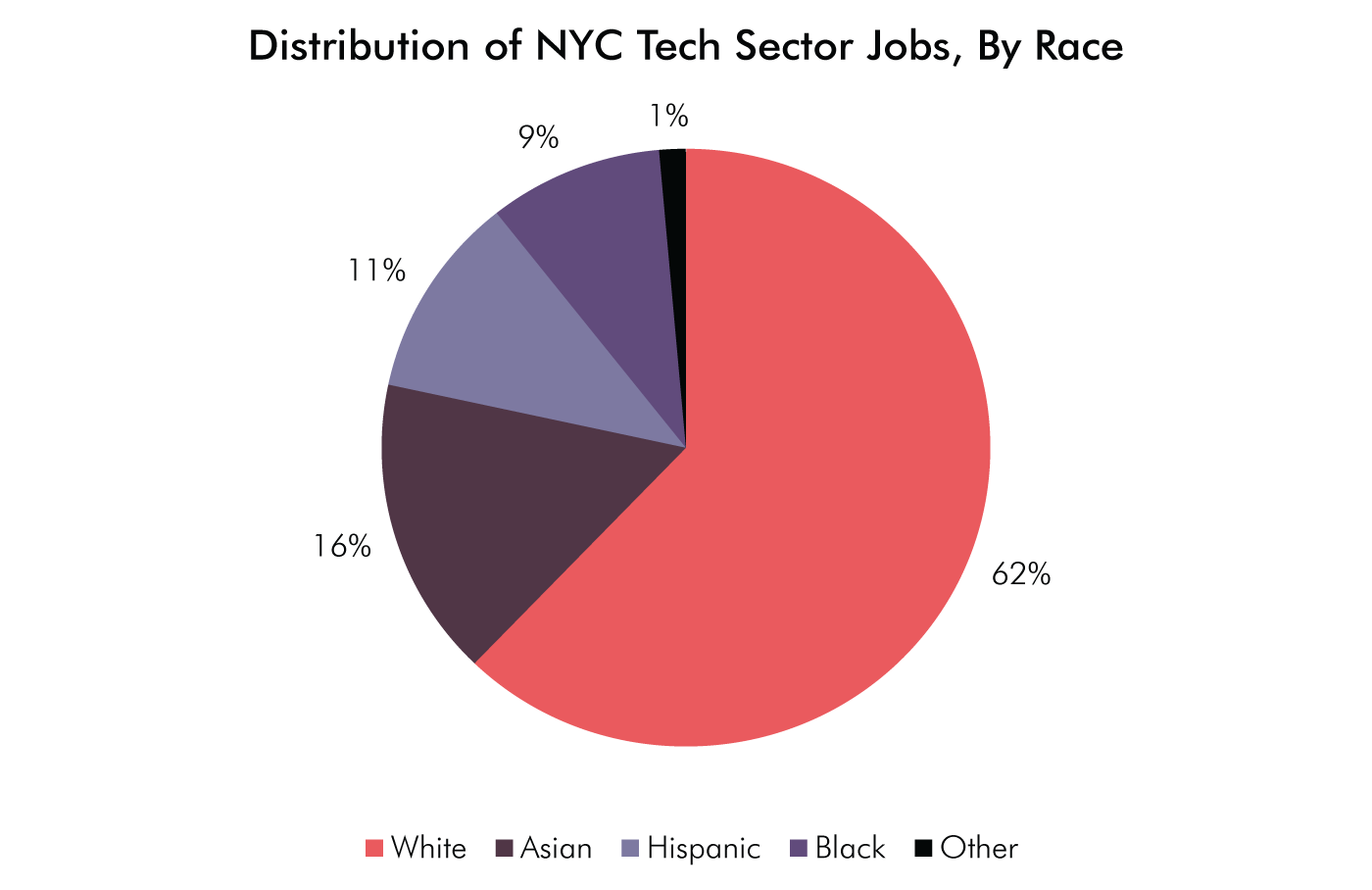 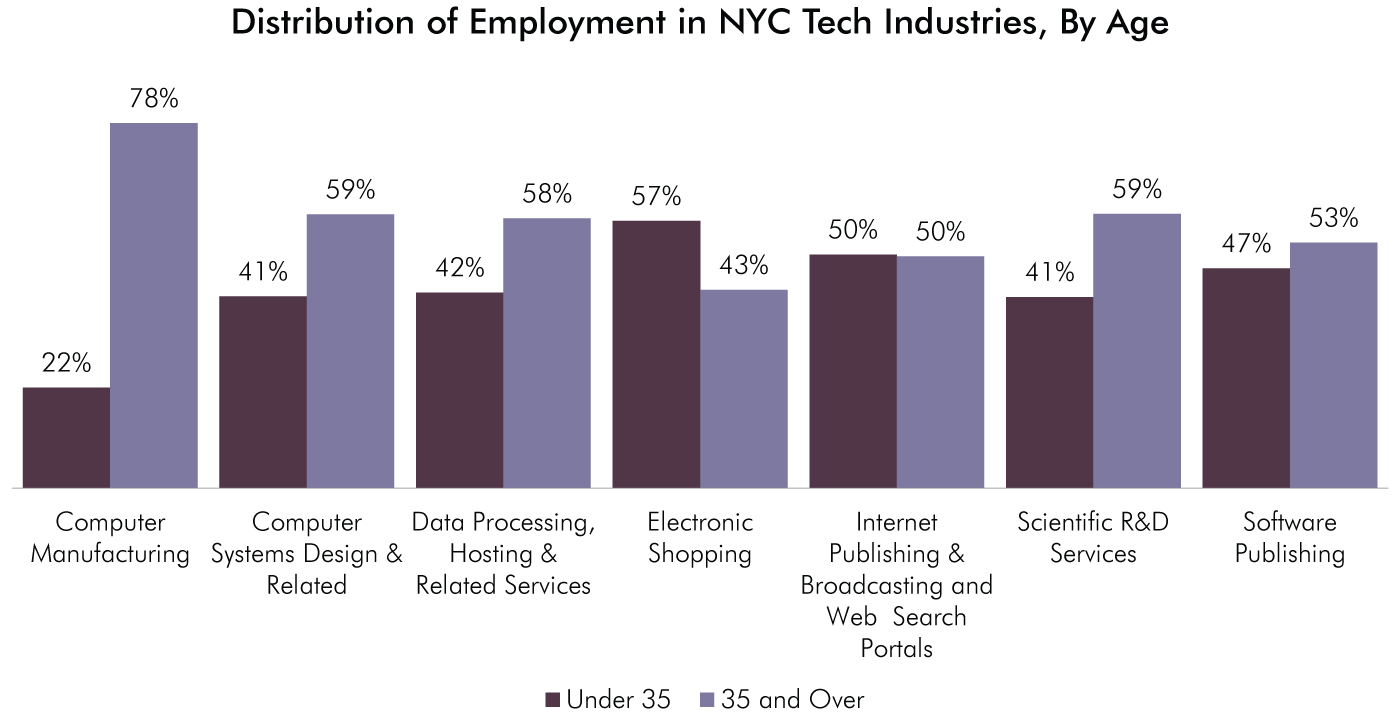 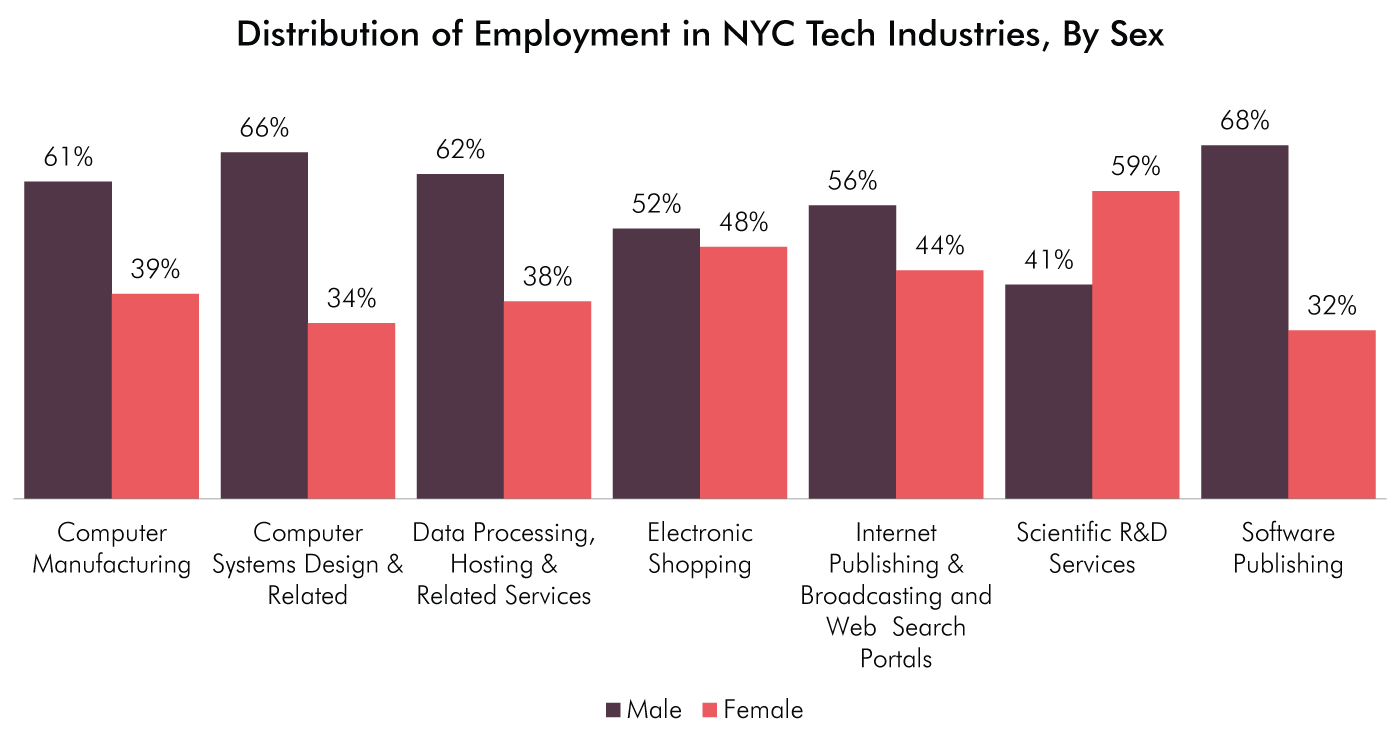 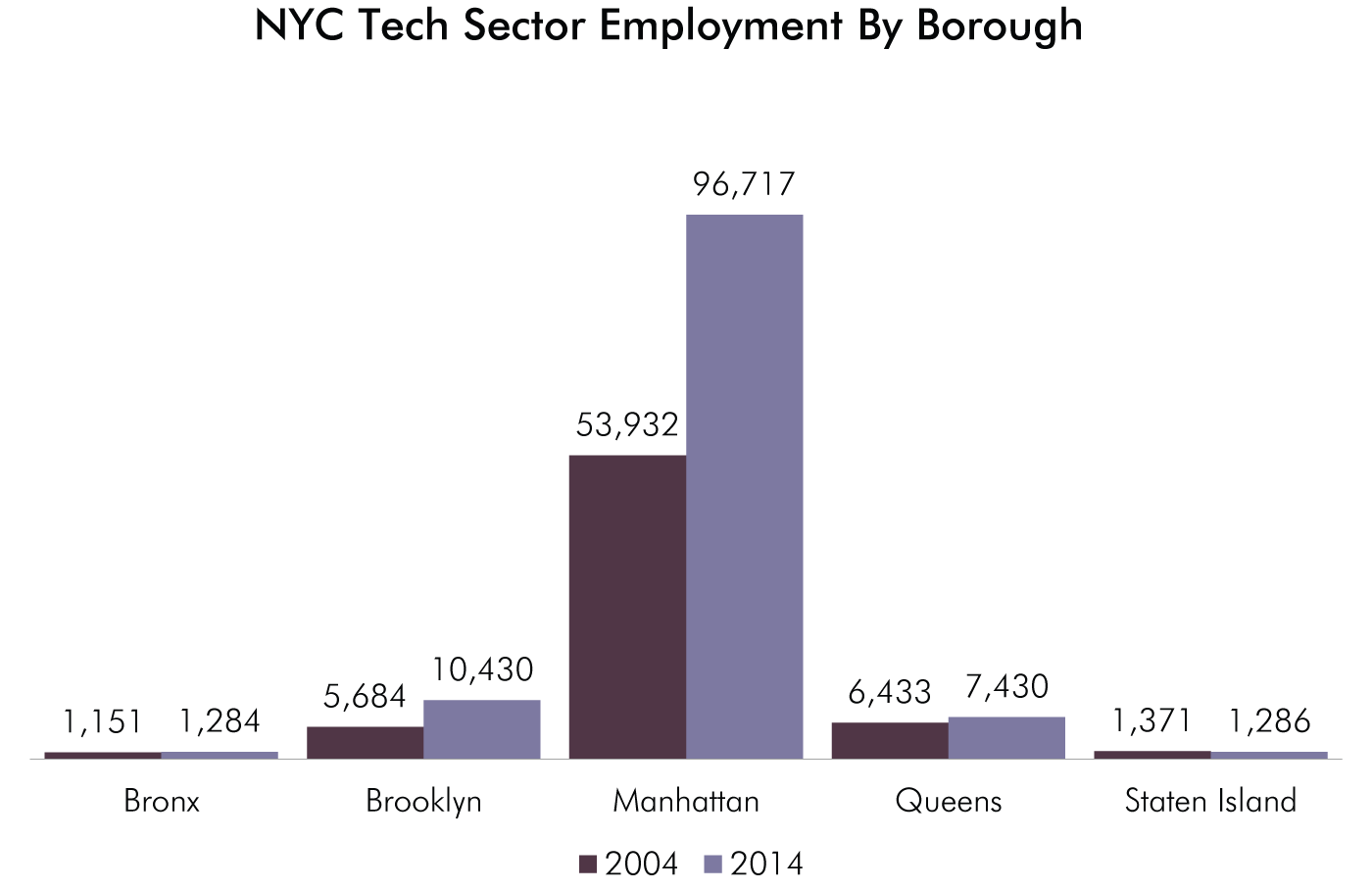 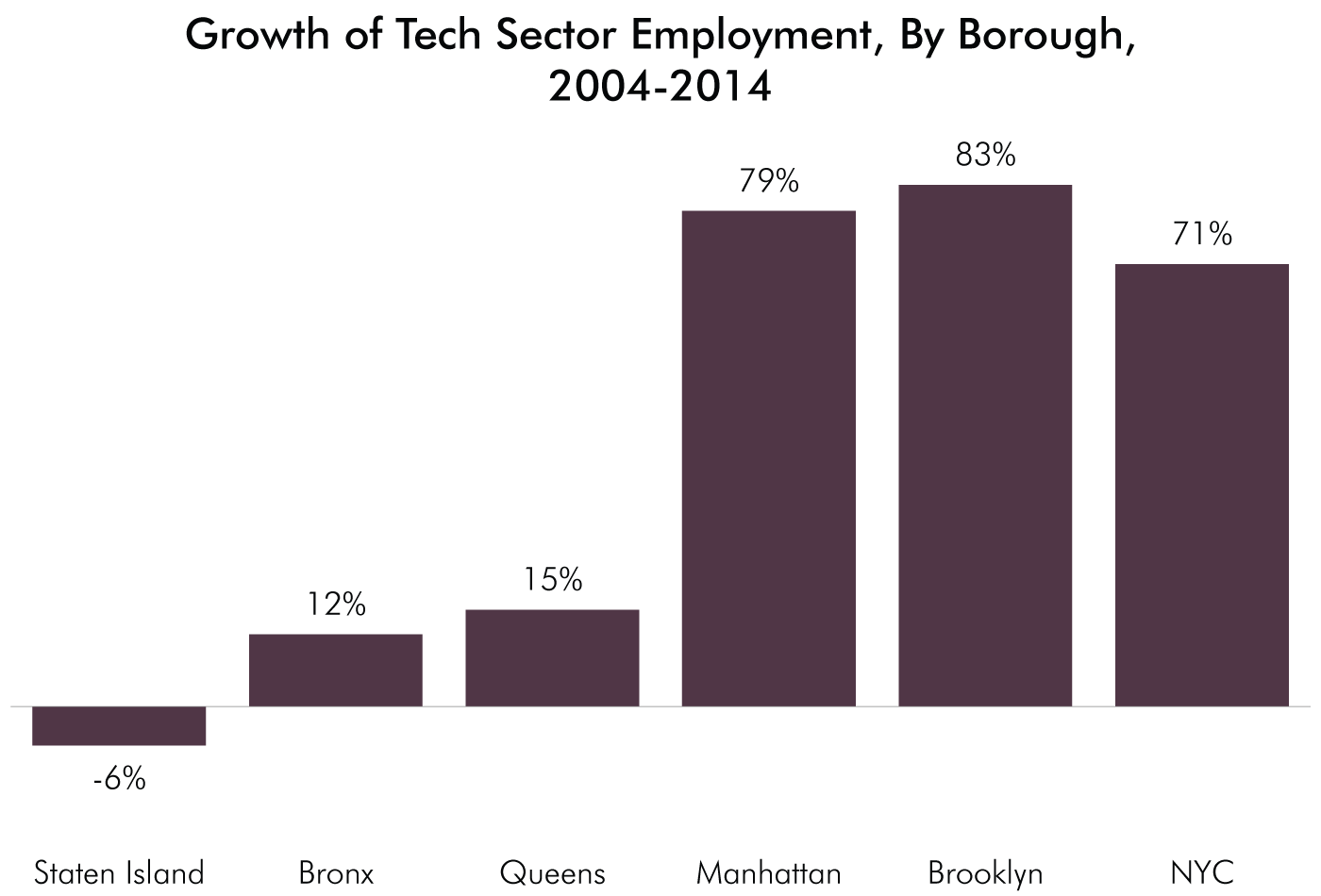 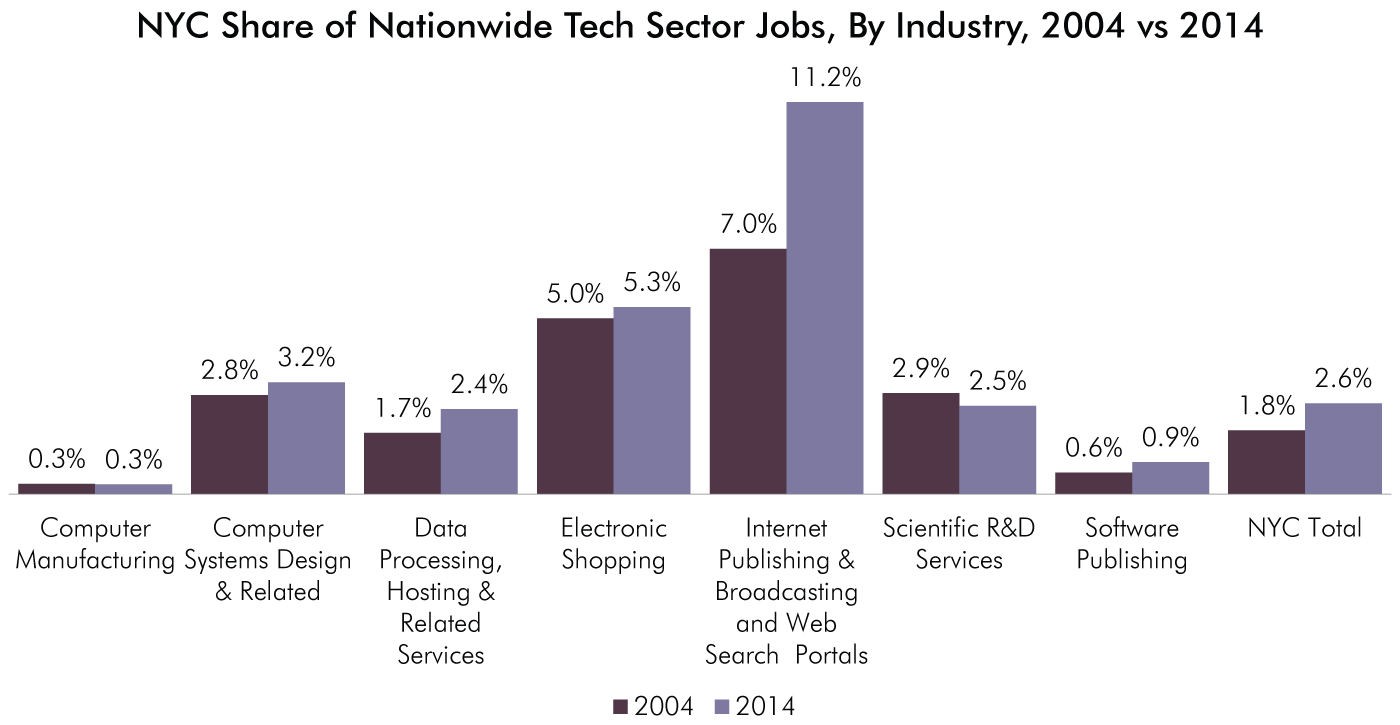 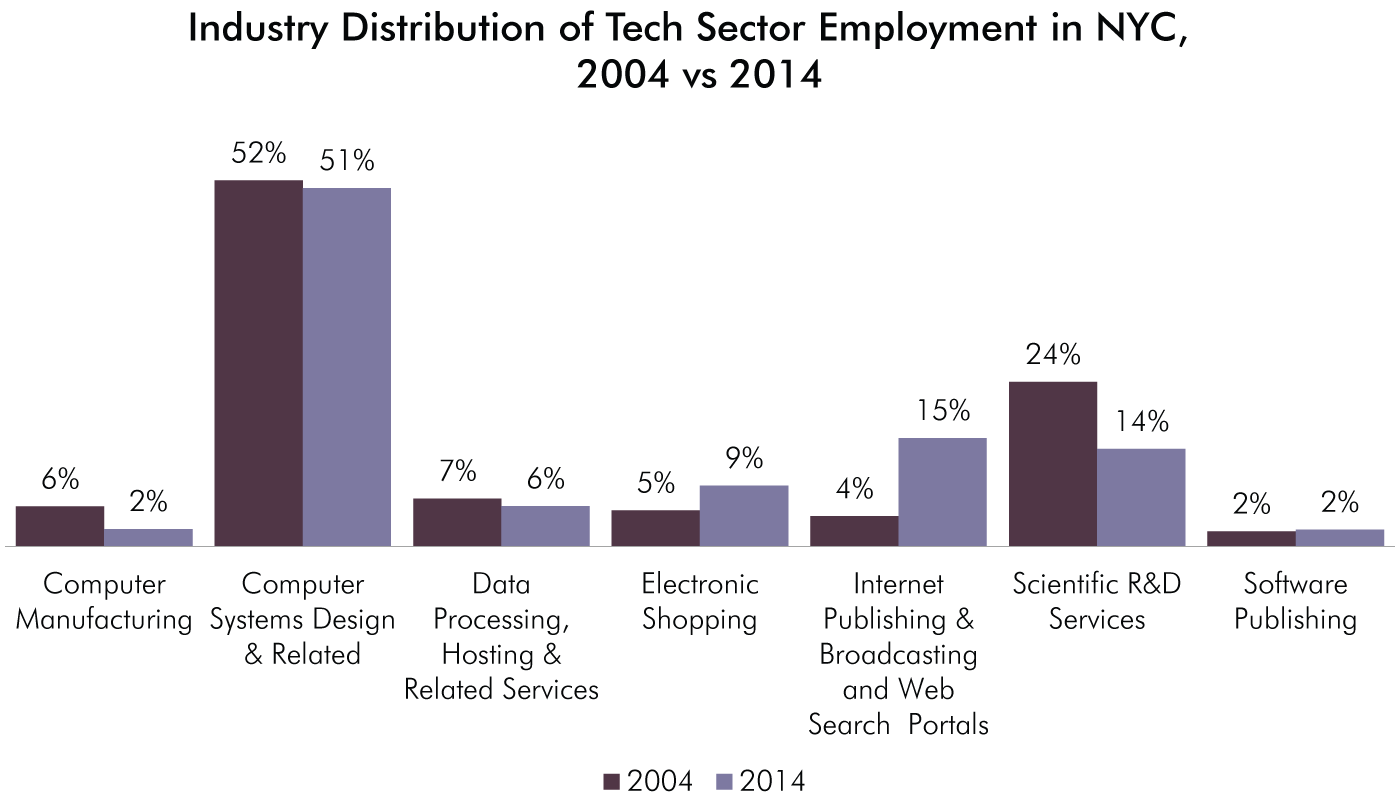 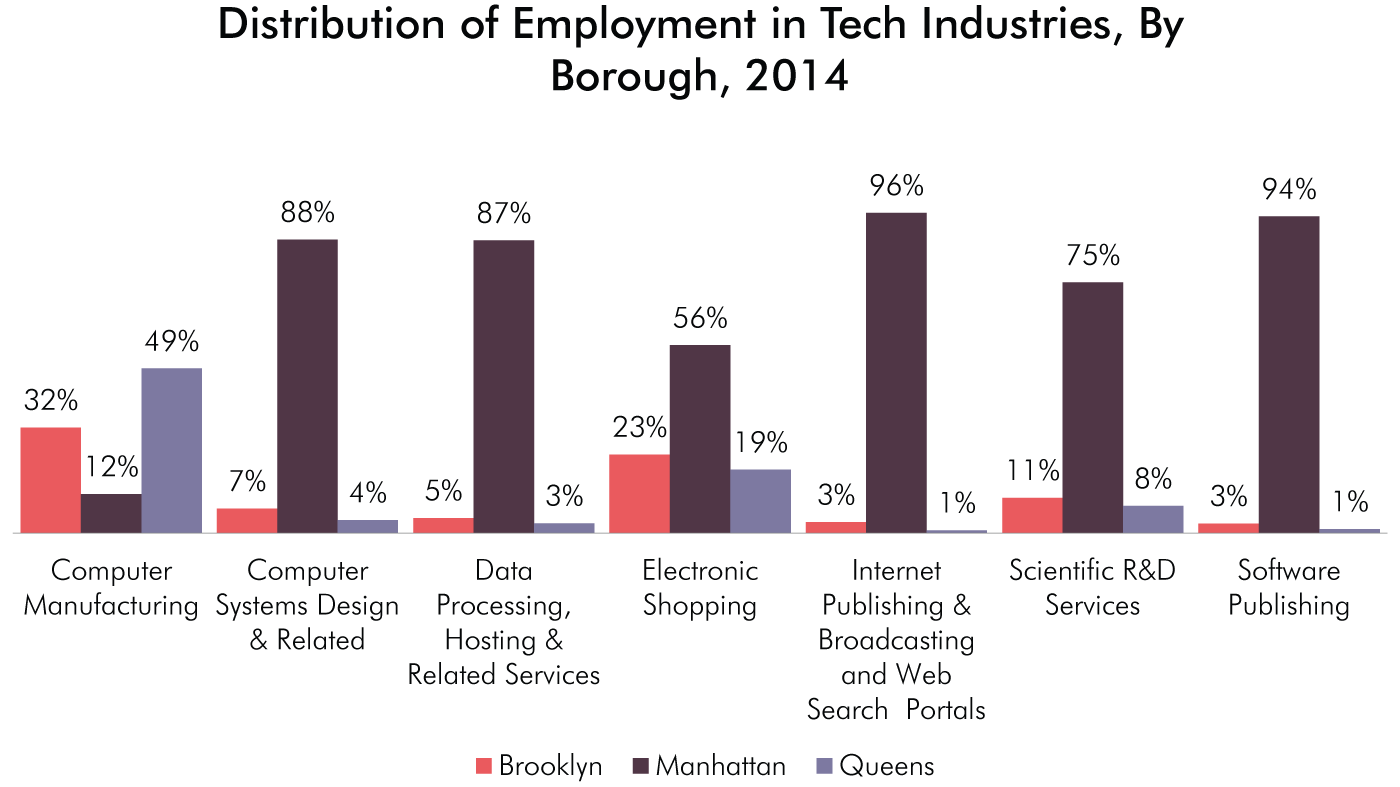 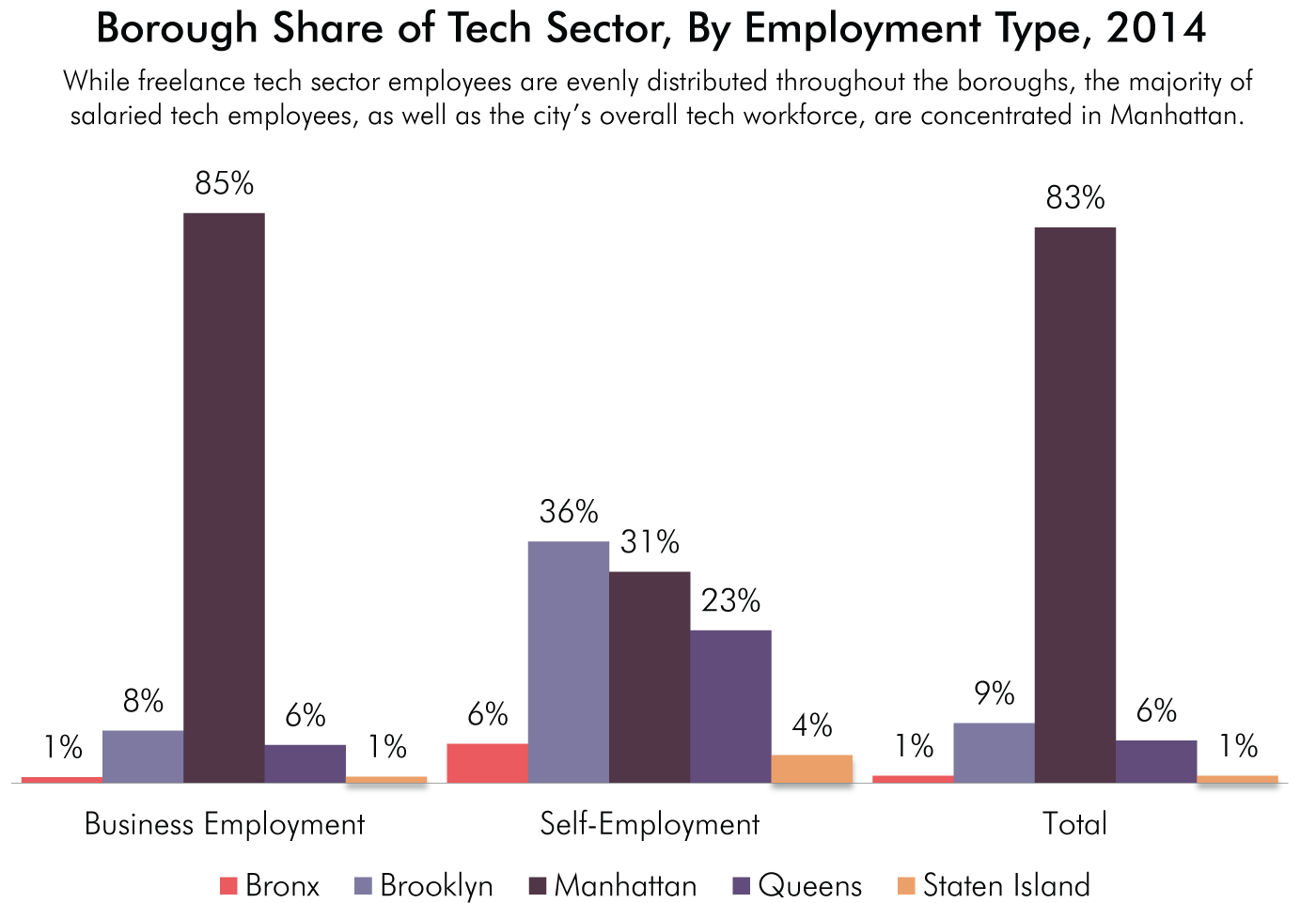 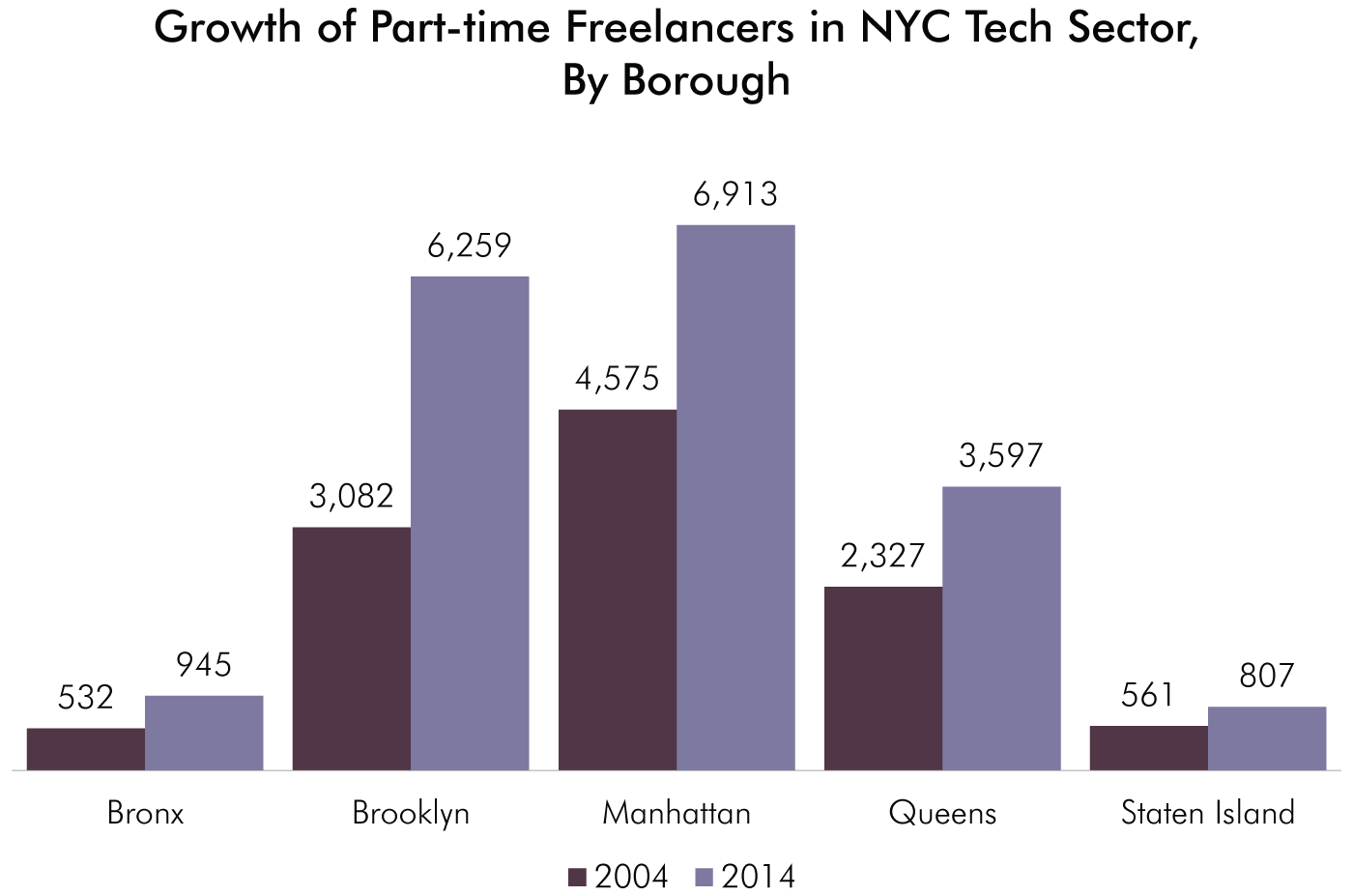 This data analysis was written by Adam Forman and edited by Jonathan Bowles. Design by Amy Parker.

The Long View: Why a tech crash could rattle NYC’s RE market

Drilling down on the burgeoning tech sector

Why is New York City’s Growing Technology Sector so White?

N.Y.C.‘s growing tech scene not as diverse as Big Apple itself

What Does Parental Leave Look Like in NYC’s Silicon Alley?