Riding a wave of start-ups, New York has emerged as a national leader in fields that leverage the Internet and mobile technologies—a development that has provided a key economic boost and left the city well positioned for future tech growth

by Jonathan Bowles and David Giles

Ever since his initial year in office, Mayor Bloomberg has been sounding the alarm that New York City is overly dependent on Wall Street and needs to diversify its economy. But finding that new engine of job growth has proved difficult.

In just a few short years, New York’s tech sector has emerged as an increasingly powerful economic driver for the city. At a time when few other industries were growing in New York, more than a thousand new tech start-ups were formed in the city. This burst of tech company formation has created thousands of good paying jobs in the five boroughs, attracted large amounts of capital from outside the city, pumped new life in the city’s entrepreneurial economy, and lured some of the world’s smartest and most innovative people to New York at a time when the most competitive cities are the ones with the best human capital and greatest capacity for innovation.

The flood of digital start-ups in recent years has also transformed the city from a second-rate tech center to literally the nation’s second leading hub for technology companies. And as this report shows, there is ample evidence that what’s happening in New York’s tech scene today is no flash in the pan. Though a number of the recent Internet start-ups will ultimately fail, New York appears to be building a sustainable tech sector—one that is benefiting from a much stronger local tech ecosystem than existed in the city’s first wave of tech growth in the 1990s and taking advantage of several big technology trends that play to New York’s natural strengths. 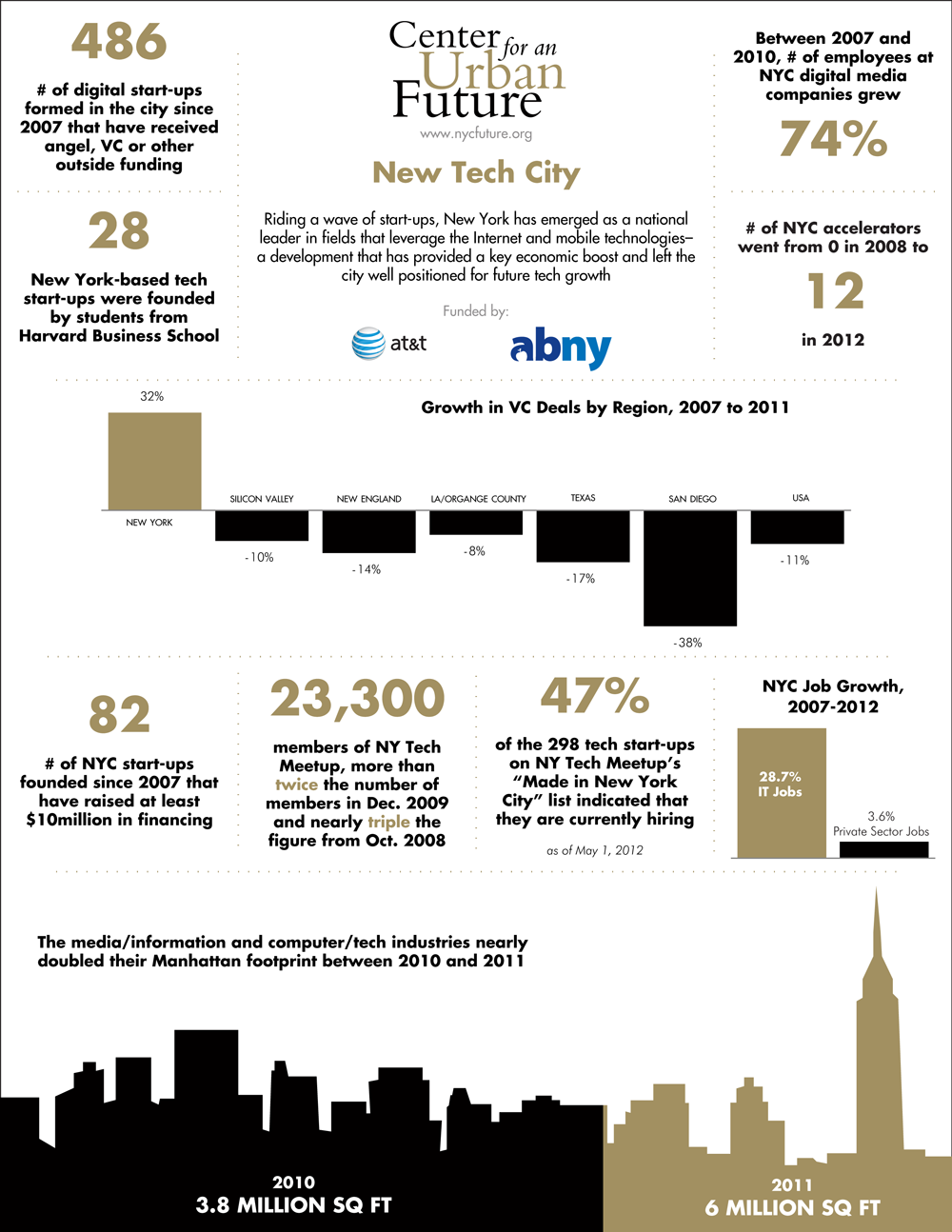 The latest in a long line of Center for an Urban Future reports focusing on opportunities to grow and diversify the city’s economy, this study provides a comprehensive examination of New York’s fast-growing tech sector, focusing on the companies in the city that are enabled by the rapid evolution of the Internet and mobile platforms. The report documents the size and scope of this sector, details the growth that has taken place in the past few years, assesses what factors have fostered this rapid expansion, analyzes which tech subsectors in New York are strongest and offer the most potential for future growth, identifies critical challenges that should be addressed if the city is to keep the momentum going. Based on an extensive data analysis and interviews with more than 50 start-up founders, veteran tech executives, investors, academics, local economic development officials and leaders from the city’s business and real estate communities, the report also makes recommendations on what should be done to support the continued growth of this sector.

The report is accompanied by a New York City Digital Start-up Index, an analysis of tech businesses formed in the city since 2007 which have received some form of outside investment from angel investors, seed funders or venture capital firms. We also break down these businesses by subsector, level of funding, employment and geographic location within the five boroughs.

What’s clear from our research is that New York City’s tech sector has come a long way in the last few years. A decade after the bust of the dot com bubble left most serious venture capitalists and entrepreneurs highly skeptical that New York could ever become a major hub of tech activity, the city has produced a wave of wildly successful start-ups, attracted entrepreneurs that previously would have almost certainly bypassed New York for Boston and the West Coast, and positioned itself at the vanguard of the fast-growing digital media, Internet and social networking sectors.

“In 2006, I wouldn’t have put New York anywhere on the map [of leading tech hubs]. Now it is literally number two.”

As recently as five or six years ago, New York was very much considered an also-ran in the pantheon of tech hubs. Although there were pockets of excellence here, few of the nation’s pre-eminent tech entrepreneurs or investors spoke about New York in the same breath as Silicon Valley or the Greater Boston area, the nation’s two longstanding tech hotbeds. The city was not producing a steady stream of tech start-ups, there were huge gaps in the investment community and there was no meaningful tech ecosystem. “In 2004 or 2005, we were still very much a distant third in terms of dollars invested in the start-up economies,” says Jim Robinson IV, a principal with RRE Ventures, the New York City-based venture capital firm. “Silicon Valley was obviously first, Boston the pretty clear second and New York was a distant third, a pretty big step down from number two. That was true in every measure: it was true in capital formation, in commitments, in bodies and in company launches.”

“In 2006, I wouldn’t have put New York anywhere on the map [of leading tech hubs],” adds Vivek Wadhwa, a national expert on tech entrepreneurship. “Now it is literally number two. If there is any second to Silicon Valley, it’s now New York, not Boston.” Even prominent Silicon Valley entrepreneurs like Paul Graham now acknowledge that New York has surpassed Boston.

It’s not that tech start-ups magically appeared on the scene in New York in the past few years. The roots of today’s tech boom were firmly planted in the early and mid-1990s, when the rise of dot com companies and digital media firms provided the first indication that New York could become a legitimate tech hub.

But in the last three to five years, New York has clearly taken things to a new level. Any way you measure it—companies, jobs, investment or community—New York has experienced stunning growth and appears well on its way to developing a sustainable digital economy.

Our digital start-up index identifies 486 tech start-ups formed in the city since 2007 that have received some investment from angels, VC firms or other private investors.

While this is itself a remarkable figure, it only scratches the surface of tech start-up activity in recent years. After all, we didn’t count tech start-ups that didn’t receive funding. Since new start-ups here seem to emerge every other day, it is difficult to get a complete picture of the number of tech firms based in New York today. Based on our data analysis and interviews with entrepreneurs and investors in the city, we estimate that well over 1,000 tech start-ups have been created in the past five years.

Even this is likely a gross undercount. Just look at the number of applications to TechStars New York, the start-up accelerator program that came to New York a little more than a year ago. According to David Tisch, managing director of the program, there were about 1,600 applicants to its most recent program, which started in March 2012. This is nearly triple the 600 applicants TechStars had for its initial New York program in January 2011 and significantly more than the 1,100 applications for its second class in July 2011.

And TechStars is just one of at least a dozen accelerator programs for tech start-ups in New York today. Prior to 2009, there were no accelerators in the city. At least two of these accelerators focus solely on start-ups in the relatively small but growing health tech field. StartUp Health, one of those programs, has received 600 applications to its health tech academy in the last nine months, according to co-founder Unity Stoakes, who says that roughly half of those are from the New York City area.

“It’s not being hyperbolic to say that the early stage business formation in the tech sector in New York has exploded,” says Thatcher Bell, a principal at Manhattan-based VC firm DFJ Gotham Ventures.

And while most of these early stage companies remain fairly small today, an increasing number of tech start-ups in New York have begun to achieve significant growth—including Foursquare, Gilt Groupe, Kickstarter, Tumblr, ZocDoc and Etsy. Of the tech start-ups founded in New York since 2007, 15 have raised more than $50 million in investments, 27 have investments of at least $25 million and 81 have raised at least $10 million.

All of this has led to a fairly dramatic increase in local employment, much of which occurred during a period when few other parts of the city’s economy were adding jobs.

There has never been a widely accepted barometer for measuring employment in the city’s tech sector, but no matter how you look at it, it’s clear that New York has experienced considerable job growth in this area. Data we analyzed from the New York State Department of Labor shows that the number of information technology jobs in the five boroughs has risen from 33,000 in February 2003 to 52,900 in February 2012—a remarkable 60 percent increase. Even in the last two years, a period of sluggish growth in the city, this sector added 7,900 jobs—an 18 percent spike. Using a more expansive definition of the tech sector, data from the New York City Economic Development Corporation (EDC) reveals that there were 90,273 people working at 7,147 “high-tech” companies in 2010, a 30 percent gain in employment from 2005. Notably, this sector grew ten times faster than the overall change in city employment in the same period.

‘New Tech City’ Won’t Keep You From the Startup Graveyard

To Be on Top, NYC Needs to Expand Broadband

Wake up, America, Detroit bankruptcy mess could happen in your city, too

New York’s Broadband Sucks. Is Anything Being Done To Fix It?

Infrastructure Investment Won’t Be Scaled Back

Some Hope Amidst Gloomy Jobs Report

NYC Boosts Up Its Broadband Capacity

Can NYC ever narrow tech gap?

Tech startups aren’t where we thought

Run an NYC Startup? New Bill Would Give a Tax Credit to Your Investors

New York Has Emerged As “The New Tech City”

Job Growth Soars in NYC, But for Whom?

Walk on the Wired Side: Office Spaces of the Tech Sector

In tech, N.Y. wants to be king of the hill, top of the heap

New York City is the fastest growing tech hub in the U.S.

What About Clean Energy?

What About Clean Energy?

NY: The End of the Digital City?

Tech, politics and growth: The new BK Chamber president’s plan for the future

Opportunities for tech education in Queens are slim: Report