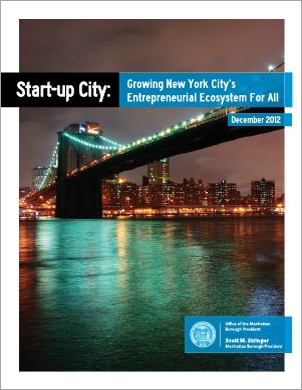 Earlier this year, the Center published New Tech City, a report which documented the spectacular rise of New York City's tech sector over the past few years but highlighted a handful of challenges that could inhibit the continued growth of this part of the city's economy. Last week, Manhattan Borough President Scott Stringer published a major new report on the future of the city’s entrepreneurial economy with recommendations for boosting the start-up economy and continuing to make New York City competitive in the coming decade. The Borough President’s report cited New Tech City more than a dozen times and several of the recommendations echoed our own policy prescriptions.