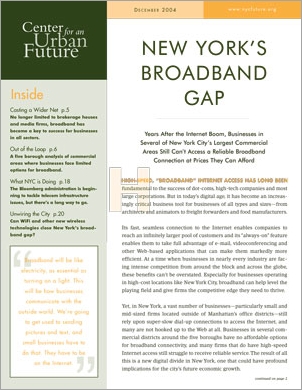 This report reveals that even as high-speed Internet connectivity grows in importance for all New York City businesses, reliable and affordable broadband access remains elusive for many New York firms.

High-speed, "broadband" Internet access has long been fundamental to the success of dot-coms, high-tech companies and most large corporations. But in today’s digital age, it has become an increasingly critical business tool for businesses of all types and sizes—from architects and animators to freight forwarders and food manufacturers.

Its fast, seamless connection to the Internet enables companies to reach an infinitely larger pool of customers and its “always-on” feature enables them to take full advantage of e-mail, videoconferencing and other Web-based applications that can make them markedly more efficient. At a time when businesses in nearly every industry are facing intense competition from around the block and across the globe, these benefits can’t be overstated. Especially for businesses operating in high-cost locations like New York City, broadband can help level the playing field and give firms the competitive edge they need to thrive.

Yet, in New York, a vast number of businesses—-particularly small and mid-sized firms located outside of Manhattan’s office districts—-still rely upon super-slow dial-up connections to access the Internet, and many are not hooked up to the Web at all. Businesses in several commercial districts around the five boroughs have no affordable options for broadband connectivity, and many firms that do have high-speed Internet access still struggle to receive reliable service. The result of all this is a new digital divide in New York, one that could have profound implications for the city’s future economic growth.

This report attempts to document how important broadband has become to businesses at every level of New York City’s economy, and to illustrate that the rollout of this vital telecommunications technology has thus far bypassed a significant share of the city’s businesses. The culmination of 12 months of research, the report analyzes how this broadband gap could impact the city’s economy in the years ahead, and what the private and public sectors can do to address this problem.

The study is based primarily on interviews with more than 100 businesses, including many from each borough, and from a cross-section of the city’s main industries. It also draws upon interviews with officials from a number of national and New York-based industry associations, government officials based here and in other states and cities, and a variety of economic development and telecommunications experts.

It’s important to note that New York City is no broadband backwater. The city’s telecom infrastructure is among the most advanced in the world, and some of the globe’s most technology-savvy businesses are based here. The vast majority of businesses located in Manhattan’s two central business districts—midtown and downtown—enjoy multiple options for broadband. And in every borough, businesses located in residential neighborhoods or mixed-use districts are now likely to have access to high-speed Internet service that ranges from adequate to outstanding, either through DSL (Digital Subscriber Line) or a cable modem system.

But in many of the industrial parks and other low density commercial areas around the five boroughs, businesses continue to face extremely limited options for obtaining broadband, and often find it downright impossible to access a reliable high-speed connection. In these areas—including large parts of Hunts Point, Sunset Park, Long Island City, Williamsburg, Red Hook, the Brooklyn Navy Yard, East New York and DUMBO—cable modem service still isn’t available and DSL either isn’t accessible or is of extremely poor quality. Fiber optics, the technology that delivers the fastest and most reliable broadband service, is not available for all but a few businesses outside of midtown and downtown Manhattan.

While some businesses across the five boroughs continue to be stymied in their attempts to get any form of broadband, in most cases, the problem is that companies can’t afford the one option they do have for a high-speed Internet connection: a T1 line. T1 lines usually offer faster speeds and greater reliability than DSL or cable modem broadband service, but they typically cost several times as much and are out of the price range of the overwhelming majority of small businesses.

There is no single reason why companies in these neighborhoods do not have more options for broadband service. One problem is that the telecommunications infrastructure in many of the city’s older commercial areas is roughly 100 years old, in bad shape and unable to adequately support the high-speed data needs of today’s digital age. Verizon, which owns and manages the city’s telephone infrastructure, has been slow to upgrade its network in these areas, largely because it has seen little financial benefit to making the significant upfront infrastructure investment and hasn’t faced enough real competition from other providers to feel pressure to do so. Cable television companies like Time Warner and Cablevision have been more aggressive in offering high-speed Internet service to small businesses, but they too say the economics of building out their broadband network to the city’s low-scale commercial areas hasn’t yet made sense.

It doesn’t help that the financial markets, which in the late 1990s provided telecom companies with billions of dollars in funds for capital projects of this kind, are now significantly more cautious.

Another huge problem is the perception that demand for broadband still hasn’t reached a critical mass among small businesses and Old Economy firms. Sure enough, some longtime business owners remain “keyboard-impaired,” while other executives have yet to see practical applications for the Internet that can translate into immediate dividends for their company, through cost savings or new business opportunities. Until demand reaches that critical mass, firms that are further along on the technology curve are likely to have a hard time getting telecom providers to address their problems. But as this report will discuss, this lag in demand also indicates a failure on the part of telecom providers, the city’s business community—including Chambers of Commerce and neighborhood-based business organizations—and city government agencies to educate small businesses about the potential value of this important technology.

As a general rule, the larger a firm is, the more likely it is to have broadband. Virtually every large business uses a high-speed connection. But for companies with fewer than 100 employees, the picture is mixed.

According to a 2002 study by the Yankee Group, one of the nation’s leading telecommunications research firms, only 65 percent of businesses in the U.S. with 20 to 99 employees have broadband; for businesses with between 2 and 19 employees, the figure falls to 40 percent.

This trend is potentially ominous for growth prospects, especially in New York City. Small businesses now account for the lion’s share of new jobs being created in the U.S. and are likely to be increasingly important to New York in the years ahead, as large corporations continue to shift jobs to the surrounding region and other, less expensive locations.

As it is, 98 percent of all businesses in the city have fewer than 100 employees and 90 percent have less than 20. And like larger companies, small businesses face ever-intense competition in today’s global economy. Whether it is a printing company in Long Island City or a recording studio in Williamsburg, businesses in New York that do not have broadband will surely miss out on opportunities for growth and find themselves at a competitive disadvantage.

The good news is that those small businesses that have embraced broadband are greatly benefiting from this technology. According to the Yankee Group, 70 percent of small businesses (firms with between 20 and 99 employees) that have broadband responded that Internet access is “very important to the functioning and productivity of their business.”

The broadband gap that exists in the five boroughs, and particularly the structural barriers that help perpetuate it, also threatens to diminish the city’s economic competitiveness at a time when some of the city’s brightest prospects for economic growth lie outside of Manhattan’s central business districts (CBDs). Roughly 48 percent (102,000 firms) of the city’s 213,000 businesses are located outside of Manhattan. In addition,many of the sectors with the greatest potential for growth in New York are heavily concentrated outside of the CBDs—including health services, the arts, film and music production, air transportation and food production.

Wider access to broadband could greatly help those sectors realize their growth potential. At the most basic level, broadband allows companies to communicate in a faster and far more efficient way, both internally and also with outside clients and consultants. It enables printers that used to receive orders in person to download them digitally, allows recording companies to transmit bulky music files over e-mail and lets film production companies in New York edit documents simultaneously with colleagues in Hollywood. It gives some firms the opportunity to market and sell their products and services around the world; a Brooklyn company that makes bagels or tortillas can expand its customer base from New York to the East Coast or the rest of the world.

“It’s in the city’s interest to have broadband available to all the businesses that need it,” says Allan Dobrin, former commissioner of the city’s Department of Information Technology and Telecommunications (DoITT). “It’s tough to have a thriving business without Internet access.”

Up to this point, the city hasn’t been aggressive in confronting gaps in the city’s telecom infrastructure or exploring how to assist more city businesses in taking advantage of a high-speed Internet connection. The few telecom initiatives supported by the city—like the Digital NYC and Plug ’n’ Go programs—have been minor successes, but these limited efforts were almost exclusively focused on a narrow range of high-tech companies. Fortunately, the Bloomberg administration now appears to be taking steps to address larger problems in the city’s telecom infrastructure.

Albany has a role to play, too. The state’s “wired building” program, which provides grants to make it easier for developers to wire commercial buildings, could help bridge the broadband gap in parts of the five boroughs. Thus far, however, only one of the 42 grants dispersed through the program—and just $75,000 of the $2.5 million committed—has gone to buildings in New York City.

Though our failure thus far to ensure adequate access to high-speed Internet connectivity suggests risk for the city’s economy, there’s a great opportunity here as well: Broadband can play an important role in New York City’s economic growth. “There are opportunities for small businesses to thrive and bring technologies to their businesses that we haven’t even tapped into,” says Greg Rohde, president of e-Copernicus, a telecom consulting firm, and former administrator of the National Telecommunications and Information Administration (NTIA). “There is a tremendous need to connect businesses into the world so they can grow.”


Out of the High-Speed Cyberspace Loop

Down and Internet Out in NYC

Hunts Point not up to business cyberspeed

Out of the High-Speed Cyberspace Loop
Crain's New York Business

Down and Internet Out in NYC
Information Week (blog)

Out of the High-Speed Cyberspace Loop
Crain's New York Business

Down and Internet Out in NYC
Information Week (blog)