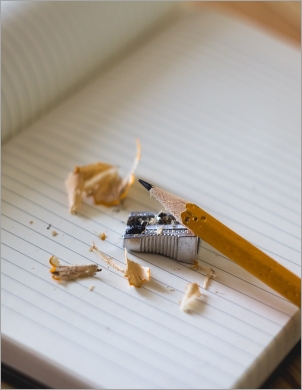 The number of New Yorkers taking and passing the high school equivalency (HSE) exam has declined in virtually every corner of the state over the past five years, a troubling development at a time when today’s economy puts a premium on educational credentials. Indeed, workers in New York State without a high school credential are more than twice as likely to be unemployed as the average worker, and nearly one in three are living in poverty. But while one out of every eight adult New Yorkers—some 1.6 million residents between the ages of 18 and 64—lacks a high school diploma, our analysis of the latest high school equivalency testing data finds that too few New Yorkers are even signing up for the test and that the state’s already dismal high school equivalency pass rates have sunk even lower.

Our analysis finds ample cause for concern:

For New Yorkers who have dropped out of high school, the first step toward a career is earning a high school equivalency diploma. For more than 60 years, that meant earning a General Education Development (GED) credential. But when the GED Testing Service announced that the 2014 edition would double in cost, switch from pencil and paper to computers, and take effect in a single year rather than being phased in over time, it became apparent that staying with the GED was about to become prohibitively expensive and potentially damaging to student aspirations. As a result, the New York State Department of Education (NYSED) put out a request for proposals that resulted in replacement of the GED with an entirely new test: the Test Assessing Secondary Completion (TASC).

New York had plenty of company in dropping the GED. Ten states replaced the GED with alternative high school equivalency tests and another 14 decided to offer other test options along with the GED. NYSED helped as many students as possible to complete the GED in 2013 and then switched to the TASC in 2014. Although New York almost certainly did the right thing in replacing the GED, early TASC results suggests that education officials and policymakers in the state need to take additional steps to ensure that many more New Yorkers can earn a high school equivalency—and with it, a shot at economic opportunity. 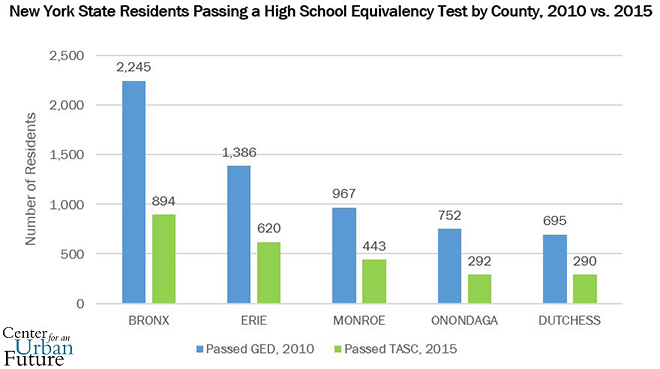 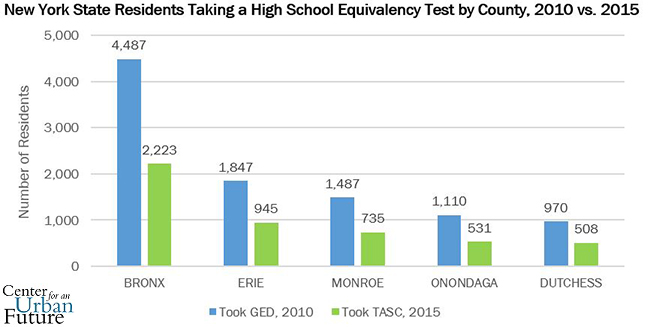 The number of people taking and completing their high school equivalency exam has dropped significantly.

New York is reaching a smaller share of adults who lack a high school diploma.

To be sure, New York’s HSE pass rate is low for many reasons that are outside of NYSED’s control. By state law, New York cannot charge a fee to an HSE test taker, nor does New York require anyone to pass a readiness test before taking the TASC. As a result, many adults take the test with inadequate preparation. It is also worth pointing out that the decline in test taking and pass rates is a national problem, not one limited to New York. NYSED officials we interviewed argue that the test-taking decline is normal for a new HSE test and believes that the test-taking rate will rebound.

To its credit, NYSED is taking several steps to improve HSE testing and completion, including training HSE instructors to teach the more rigorous curricula required for successful TASC completion, collaborating with the TASC vendor to better align test questions with high school graduation requirements, and providing technical assistance to test centers. It’s clear, however, that more is needed. Given the growing expectation among employers that job applicants must have a high school credential, the outcomes of New York State’s HSE system continue to be cause for concern. Faced with declining participation and lagging pass rates, policymakers should support NYSED in its efforts to recruit more test takers, train instructors to teach more difficult material, and expand the availability of test preparation in counties from Onondaga to Queens.

New York’s outcomes might well have been worse had it stayed with GED. The GED Testing Service unnerved many in the field by unilaterally reducing the score needed to pass the GED, suggesting that pass rates may have been unacceptably low in some GED states. Furthermore, the GED Testing Service no longer publishes annual reports on state outcomes, unlike its competitors, TASC and HiSET. Sharp declines in testing and passing rates have been reported in Ohio, Kentucky, and Colorado.  Despite its advantages over the GED, however, New York’s TASC test is still leaving far too many adults behind. 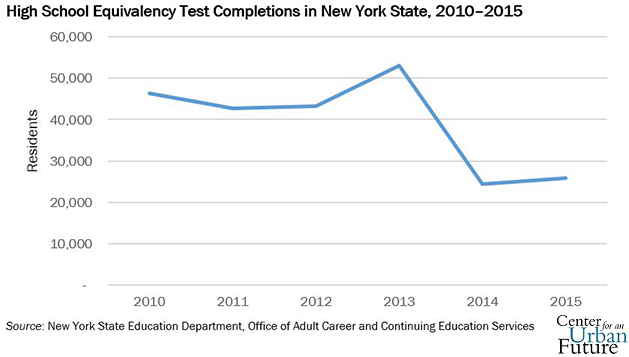 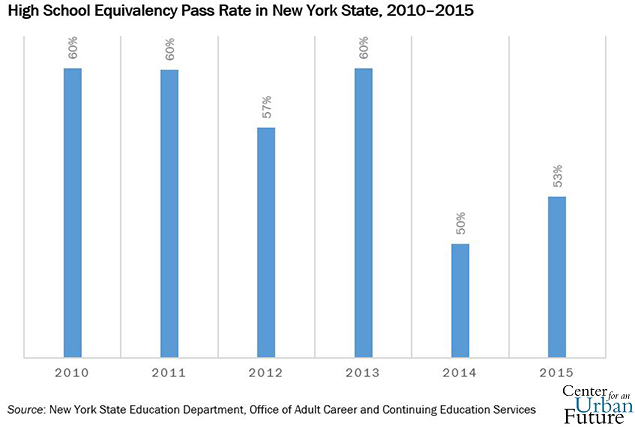 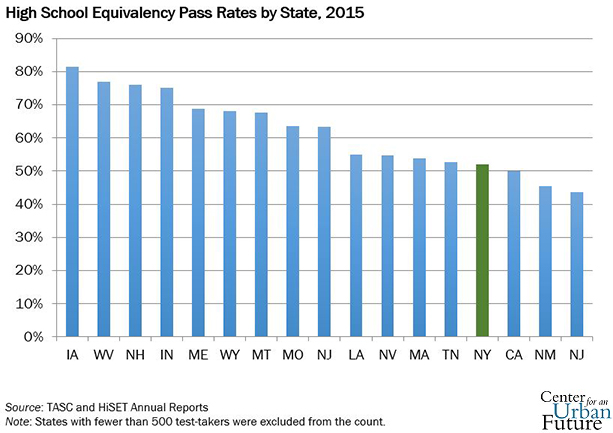 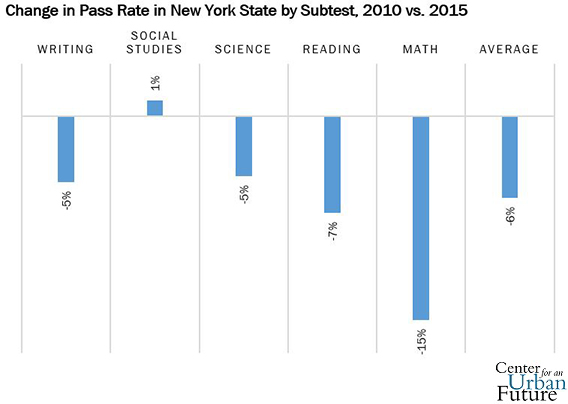 This report is funded by the Working Poor Families Project, a national initiative supported by the Annie E. Casey, Ford, Joyce, and Kresge Foundations, which partners with nonprofit organizations in 22 states to investigate policies that could better prepare working families for a more secure economic future.

What Dip in High School Credential Means for NYC Employment

This report is funded by the Working Poor Families Project, a national initiative supported by the Annie E. Casey, Ford, Joyce, and Kresge Foundations, which partners with nonprofit organizations in 22 states to investigate policies that could better prepare working families for a more secure economic future.