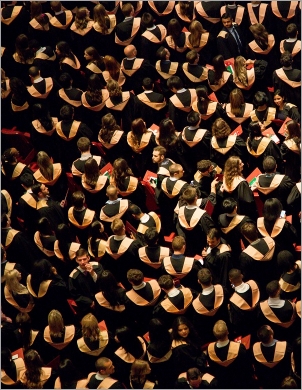 Op-Ed: California shows New York how to boost college completion along with affordability

The governors of New York and California both issued bold proposals this month placing public colleges and universities at the top of the agenda. Governor Cuomo's investment should be coupled with new strategies to make sure more students reach graduation day. For this, New York should look to the Golden State.

This op-ed was published in the Albany Times Union on February 7, 2017. Read the op-ed here.

Cuomo deserves enormous credit for taking action to make college affordable for more New Yorkers. But this investment should be coupled with new strategies to make sure more students reach graduation day. For this, he should look to the Golden State, where Brown's proposal seeks to dramatically improve college graduation rates at community colleges by streamlining the path to a degree.

New York has major room for improvement in college completion. A Center for an Urban Future study found an average six-year graduation rate for community colleges in New York of only 35 percent. The implication for expanded access is clear: We could be inviting many more New Yorkers to enter college and then leave without a degree. Instead, we should identify and resolve the obstacles that keep students from graduating.

Confusion can be the enemy of college success. For many students, navigating college is like eating at an unfriendly diner: too many choices, and too little time to think before the waiter arrives to take your order. Students end up making terrible decisions, like picking courses outside their program of study or satisfying the same academic requirement multiple times. The result is wasted time and money, often leading to burnout and dropout.

So why not use behavioral research to restructure academic choices, so students can get to a degree more quickly and efficiently? That's what the guided pathway model does, and colleges using it have raised graduation rates across the country.

The California Guided Pathways Project is a public-private partnership, rather than a top-down government mandate, managed by the state community college agency in collaboration with virtually every major higher ed support organization and philanthropic funder. CGPP offers grants that enable community colleges to implement a fully scaled guided pathway model for all students.

The state of California is using its $150 million investment to expand CGPP. But California's initiative is designed as a short-term overhaul, which doesn't require a permanent commitment. The purpose is to restructure the colleges so they can provide superior service to students at the same budget.

New York is ready to make a serious investment in guided pathways. Although most of the public colleges still operate like unfriendly diners — true of schools across the country — there are a few points of light. CUNY's Guttman Community College and the Accelerated Study in Associate Programs initiative are becoming national models, as is Monroe Community College in Rochester.

Once the partnership gets off the ground, the state should invest in scaling it up. This model would require an unusual level of coordination among stakeholders. But the result would be a public higher ed system in New York that meets the needs of tomorrow's students far more effectively than it does today.

This op-ed follows publication of several CUF reports on community colleges and college readiness, including CUF’s recent op-ed for City LImits in response to Governor Cuomo's free college tuition plan, "New York Can Help Students Afford College - And Graduate";  Completion Day, which asserted that while community colleges are a critical resource for a growing number of New Yorkers, they are taken for granted by policymakers and face enormous challenges in graduating students; Tapped Out, which found that the Tuition Assistance Program (TAP), the state’s main financial aid program, is out of reach for most community college students enrolled on a part-time basis; and Mobility Makers, which showed that community colleges were crucial platforms for economic mobility but that too few students enrolled actually made it to graduation.