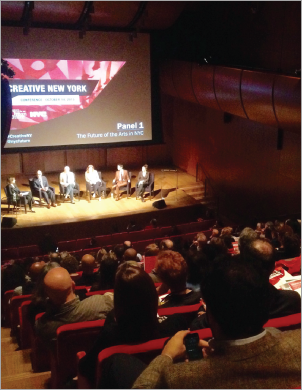 The Future of the Arts in NYC

On October 14, 2015, the Center for an Urban Future in partnership with the City of New York organized a half-day conference at the Morgan Library and Museum to discuss the future of the arts in New York. In this recap, we share some important take-aways from the discussion and a few ideas that we found particularly compelling and achievable.

The symposium delved into the biggest challenges facing New York’s artists, arts organizations and creative workers—from the affordability challenges experienced by so many artists and the struggles of mid-sized arts organizations to the diversity gap in the arts. Building upon the Center’s 2015 Creative New York report, the discussion focused on generating new ideas for how to strengthen the arts across the five boroughs and maintain New York City’s status as the nation’s pre-eminent creative capital.  By the end of the conference, attendees shared over 70 ideas for what the city and philanthropy can do to bolster the arts in NYC.

Click here (PDF) for the recap of the event.