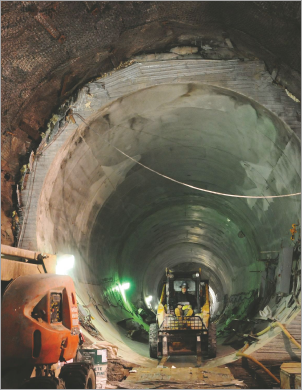 CUF Finding Leads to Increased Funding for Water Tunnel No. 3

Center for an Urban Future report spurs increased funding and accelerated timeline for the completion of Water Tunnel No. 3.

Earlier this month, Mayor Bill de Blasio announced that $305 million would be added to New York City’s capital budget to expedite completion of Water Tunnel No. 3. The final stage of the water tunnel will serve residents in Brooklyn and Queens and provide much needed redundancy to the city’s two water tunnels, built in 1917 and 1936 respectively.

In a March 2015 data analysis, the Center for an Urban Future was the first to report that funding for Water Tunnel No. 3 had been deferred. CUF’s research was cited in a recent New York Times article that brought significant attention to the issue, and led many civic leaders to question the decision to postpone work on the crucial water infrastructure project. Within days of the article’s publication, Mayor de Blasio announced the new funding and expedited timetable for the water tunnel project. The Times article quoted CUF Senior Researcher Adam Forman, the author of our data brief and cited Caution Ahead, the Center’s 2014 report about New York City’s aging infrastructure.