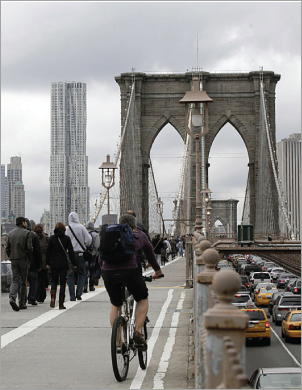 At a time when so much of the city’s essential infrastructure is in need of repair and expansion, funding for New York's infrastructure projects is critical. In a May 2015 testimony before the City’s Committee on Finance, CUF executive director Jonathan Bowles presents new ideas for capital funding streams.

Good afternoon. Chairwoman Ferreras, members of the committee, thank you for inviting me to testify. My name is Jonathan Bowles. I am Executive Director of the Center for an Urban Future. The Center is an independent think tank that publishes studies about critical issues facing New York City, with a focus on growing and diversifying the New York City economy and expanding economic opportunity.

Roughly 1,000 miles of New York City water mains are more than 100 years old, a big reason why there have been at least 400 water main breaks in all but one year since 1998.

More than 160 bridges across the five boroughs were built over a century ago, and dozens of bridges have been deemed structurally deficient.

Over 170 school buildings were constructed over a century ago, the city’s public hospital buildings are 58 years old, on average, and 531 public housing towers were built prior to 1950.

To be sure, New York City’s core infrastructure is in dramatically better shape than it was in the 1980s, when the city closed the Williamsburg Bridge for fear of collapse, track fires were a regular occurrence in the subway system and the Brooklyn Bridge, FDR Drive and West Side Highway all experienced fatal structural failures.

Yet, many critical components of the city’s infrastructure are past their useful life and highly susceptible to breaks and malfunctions. And despite the recent progress, some aspects of the city’s core infrastructure have slipped backwards in recent years. The number of water mains breaks rose from 370 in 2012 to 513 last year. Not surprisingly, water main replacement has fallen during this period, sitting well below its “state of good repair replacement rate” of approximately 68 miles per year. From 2003 to 2008, the DEP replaced an average of 46 miles of old and deficient pipe each year. From 2009 to 2014, only 27 miles.
Road conditions have also declined in recent years, as limited DOT resources shifted to bridges. From 2003 to 2014, the share of roads with a pavement rating of “good,” fell from79.8 percent to 69.3 percent. And while the city has recently filled more potholes and repaved more streets, the more fundamental repairs to road foundations have fallen. Road reconstructions dropped from an average of 58 miles per fiscal year from 2005 to 2009 to 40 miles per fiscal year from 2010 to 2014.

While the city undoubtedly needs to modernize much of its aging infrastructure, there are also clearly places where it needs to expand and improve the infrastructure networks to support a city whose population has grown by more than a million since 1990 and whose economy is very different today. As just one example, while so much of the population growth, job growth and transit ridership growth has occurred in the boroughs outside of Manhattan, transit service in the boroughs has not kept up – and so many city residents deal with overcrowded trains, unacceptable delays and insufficient service. Another example is the city’s public libraries, which are serving more people than ever before but face at least $1.1 billion in state-of-good-repair maintenance needs.

Coming just one month after the release of its comprehensive long-term plan, OneNYC, the capital budget documents are hugely encouraging. Moreover, the mayor’s advocacy in Washington for federal infrastructure funding is a big deal.

Our Caution Ahead report estimated that it would cost $47.3 billion over the next five years to bring the city (and its authority’s) transportation, utility and building infrastructure to a State of Good Repair. This figure does not include the Department of Environmental Protection, whose state of good repair needs exceed $20 billion.

While these numbers are daunting, the economic and financial costs of not modernizing the city’s infrastructure are even greater. Moreover, investing in infrastructure is a proven job generator. According to a 2009 University of Massachusetts study, every $1 billion invested in roads and bridges creates nearly 15,000 jobs.

These construction, engineering and design jobs can provide a clear pathway to the middle class. A new infrastructure investment should include new apprenticeship programs and job training to ensure that a diverse mix of New Yorkers can access these jobs and build long-term skills.

In order to make the infrastructure investments that are so needed, the administration must take the lead in identifying and embracing new capital funding options.

There are already several good ideas worth exploring.

First, it should push for adoption of the Move NY Fair Plan, collecting up to $1.5 billion each year by introducing tolls on East River Bridges while reducing them on several outer borough crossings.

Second, the city should consider looking to private developers to help fund new infrastructure projects. The second phase of the Second Avenue Subway, for instance, will be a boon to East Harlem real estate. The City could follow London's lead, establishing a Community Infrastructure Levy on each square foot of new construction in the neighborhood. As developers profit from increased investment in public infrastructure, it is only fair that they contribute to this investment. The return on the levy could be divided between the subway extension and the city's affordable housing fund.

The city might also adopt a Pay-As-You Throw system, which requires residents to pay based on how much household waste they generate. The system has proven effective in other cities and could reduce sanitation costs by creating incentives for residents to recycle more and waste less.

And, to improve funding for water and sewage assets, specifically, we recommend two reforms. First, New York City should follow Seattle, Philadelphia, and 500 other cities, by replacing its sewer charges, currently assessed at 159 percent of the water rate, with a more nuanced stormwater management fee. Property owners would be charged according to the percentage of rainwater captured on their lot (before it enters the city’s overburdened sewer system). This would incentivize increased water retention on private property, with customers paying a lower fee as they introduce new green elements – trees, swales, porous pavement, and green roofs. This could be coupled with a credit program, repaid each month via the utility or property bill, to help customers finance the installation of green elements.

Second, the city should eliminate the “rental payment” it charges the New York City Water Authority. The fee no longer serves its original intent and, given the age and condition of New York’s water and sewer assets, the city should not be diverting money from these infrastructure systems to its general fund.

But these are just a few new revenue ideas. The administration should convene a task force to come up with other options.

There are other things the administration could be doing in addition to new funding streams. To more effectively prioritize the city’s capital spending, the Office of Management and Budget and Department of Design and Construction should improve its Asset Information Management System (AIMS) report, a condition assessment of city-owned buildings, parks, bridges and piers. The current inspections are cursory, poorly integrated into the capital planning process and do not include water and sewer assets, public housing, East River bridges or agency vehicles.

And to reduce construction delays and cost overruns, the city should avoid inexperienced contractors who fail to live up to their “low bid.” In 2009, Albany authorized cities to pre-qualify public works contractors based on credentials, experience and past performance. City agencies should be more aggressive in implementing pre-qualification lists to ensure that selected contractors are capable of providing quality construction.

City officials should also pressure Albany legislators to authorize Design-Build contracts for municipal projects. The current practice of separately bidding out design and construction contracts slows the building process, produces designs that are unsuitable for construction and must often be modified, and blurries accountability for delays, discouraging the use of on-time and on-budget incentives and penalties.

Thank you for the opportunity to testify.

De Blasio’s Record on Jobs and The Economy

De Blasio’s Record on Jobs and The Economy
Gotham Gazette

De Blasio’s Record on Jobs and The Economy
Gotham Gazette