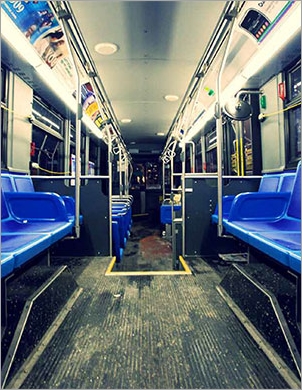 MTA Expands Real-Time Arrival Technology to all NYC Buses, a Recommendation from CUF’s Behind the Curb Report

The Center’s 2011 Behind the Curb report recommended that the MTA install GPS devices on all city buses in order to make real-time arrival updates available to all riders. After piloting Bus Time in Staten Island and expanding to the Bronx and Manhattan last year, the MTA is now installing the service on Brooklyn and Queens buses.

Our 2011 Behind the Curb report revealed the importance of bus service to the city’s working poor, especially those commuting to-and-from the boroughs outside of Manhattan. One recommendation from the report was for the MTA to install GPS devices on all city buses to provide real-time updates on bus locations. Our research found that working-poor commuters often have less flexible schedules and are more likely to travel at unconventional times of the day. Knowing where the next bus is and how long it is going to take to arrive will help mitigate the challenges many of these residents face when transferring from bus to bus and traveling to far-flung destinations in the boroughs outside of Manhattan.

Although it was initially used on Select Bus Service routes only, the MTA started using real-time arrival technology on all Staten Island buses in late 2011. After expanding to Manhattan and the Bronx last year, the agency recently announced that Bus Time will be available for Brooklyn and Queens routes in early 2014.