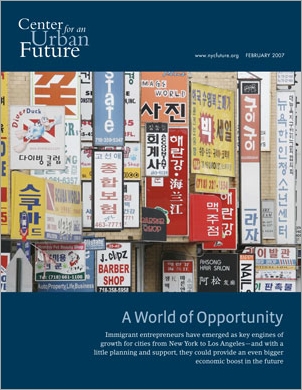 A World of Opportunity

This new report by the Center documents that immigrant entrepreneurs have emerged as a key engine of economic growth for cities from New York to Los Angeles--and, with the right support, could provide an even bigger boost to these cities in the years ahead.

Immigrant Entrepreneurs Lean on the Familiar

Immigrant Entrepreneurs: A Tour of One Ethnic Enclave

Immigrants: The Unsung Heroes of the U.S. Economy

Cuomo promises jobs but does not mention immigrants

The Best Cities For Minority Entrepreneurs

The Impact of Immigrant Entrepreneurs

Indians, Other Immigrants Key Players in Growth of U.S. Cities

Immigrant Life and the Streets of New York

Immigrants Key to Economic Growth in NYC, Other Urban Areas

Lost in America, Found on a Field

Queens Immigrants’ Role In The Economy