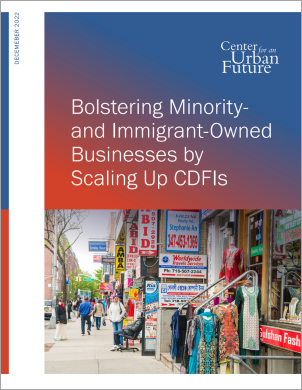 Bolstering Minority- and Immigrant-Owned Businesses by Scaling Up CDFIs

New city and state government policies and investments are needed to strengthen New York City’s minority- and immigrant-owned businesses. Few would have a greater impact than expanding the reach of the city's Community Development Financial Institutions.

by Judith Messina with Eli Dvorkin

How To Help CDFIs Expand Their Reach and Deepen Their Impact

With decades of experience supporting immigrant- and minority-owned small businesses and unparalleled trust among entrepreneurs from lower-income communities, CDFIs are uniquely positioned to help more underserved entrepreneurs start and grow their businesses. But despite the near consensus among city and state policymakers that strengthening these businesses should be a top priority, CDFIs have seldom been enlisted as essential partners in these efforts. They also receive just a tiny fraction of city funding that goes to small business services. If government is to succeed in bolstering underserved businesses for years to come, this will need to change. Mayor Adams should start by directing New York City’s Department of Small Business Services (SBS) and Economic Development Corporation (EDC) to embrace and support CDFIs to a far greater extent. This means taking steps to ensure that CDFIs receive a larger share of city funding for small business assistance, integrating CDFIs into every new small business assistance grant and loan initiative launched by SBS and EDC, greatly expanding the number of referrals to CDFI partners made by the city’s Business Solutions Centers and through programs like Black Entrepreneurs NYC and Women Entrepreneurs NYC, and consulting with CDFIs regularly on the design and implementation of new small business support programs.

2. Create a new capacity building fund for CDFIs, enabling them to increase staff and invest in technology.

One of the clear findings of this report is that CDFIs are most in need of additional operational support—not lending capital—so they can hire more staff to underwrite loans and invest in new technology tools that make processing small loans far more efficient. Despite the clear need for operating support, however, government and private sector partners too often only seek to provide lending capital to CDFIs. To change this and help CDFIs reach significantly more minority- and immigrant-owned businesses, city and state leaders should establish a new capacity-building fund that provides multi-year grants for CDFIs to ramp up investments in staffing and technology.

3. Help raise the visibility of CDFIs to expand their reach and impact.

Create a unified CDFI network modeled on Philadelphia's Business Lending Network, simplifying the process for small businesses seeking financing and generating referrals to CDFIs citywide. New York City’s underserved small business owners have no central place to turn to connect with CDFIs and understand their menu of services. New York City should simplify the process by setting up a capital consortium modeled on the Philadelphia Business Lending Network, enabling small business owners to express an interest in receiving financing from a network of approved lenders. A unified portal would allow small business owners to complete one form and be seamlessly matched with participating CDFIs or other community lenders that could support their capital needs and provide tailored technical assistance.

Help CDFIs reach more underserved communities with new supports for physical expansion and grants to deploy on-the-ground outreach teams. More than a dozen lower-income neighborhoods across the city lack a single physical CDFI outpost, even as many CDFIs report that their storefront locations are a major driver of new client relationships. City leaders should work with the Department of Housing Preservation and Development and NYCEDC to incentivize the creation of new CDFI branch locations in existing CDFI deserts, including Tremont and the Jerome Avenue corridor in the Bronx, East New York and Brownsville in Brooklyn, and Richmond Hill and Far Rockaway in Queens. The city’s housing and development agencies should work with SBS to identify ground floor locations and unfilled community facilities in city- and state-financed developments and help bring CDFIs into those spaces. In addition, city leaders should work with SBS to launch a grant program designed to enable CDFIs to deploy door-to-door outreach teams to the places where underserved entrepreneurs live and work, including NYCHA developments and public libraries.

Connect new business incorporation filers with CDFI referrals and encourage banks to refer rejected business loan applicants to microlenders. As they pursue capital to start or grow their businesses, many underserved entrepreneurs discover that a traditional commercial bank may not be a good fit for their needs but lack awareness that CDFIs can provide a workable alternative. To address this disconnect, city and state policymakers should encourage banks to refer applicants turned down for business loans to local CDFIs. Currently, too few banks are making these referrals, even though doing so may help them get business from that entrepreneur down the road. At the same time, several CDFIs—especially those that are depository institutions—have sufficient capital to do more lending, but need a more consistent influx of new potential clients. To further boost awareness of CDFIs, New York State could provide all individuals incorporating new businesses in the state with a welcome packet introducing them to their local CDFIs and the services they provide.

Launch a CDFI Success Stories citywide marketing campaign. For many CDFIs, the greatest obstacle to expanding their reach and impact is a general lack of visibility in the marketplace. To help CDFIs reach more of the underserved entrepreneurs who have the most to gain, New York City should do more to make CDFIs a household name. Launching a CDFI Success Stories marketing campaign—with outdoor and online advertising and outreach via community events, vendor fairs, and festivals—could raise the visibility of relatable business owners who have started and grown businesses with support from CDFIs.

4. Ramp up investments in multiyear loan and equity capital to support increased lending and assistance to small businesses.

Although access to loan and equity capital is a smaller challenge than the need for capacity-building support, many CDFIs report sufficient demand to expand their lending by a factor of two, three, or more—but lack the capital and reserves to do so. While New York City and State have devised a handful of vehicles to help capitalize CDFIs, funding has historically been limited and lacked the multi-year certainty that these institutions need to budget effectively and build sustainable strategies to support local small businesses. As policymakers consider new funding mechanisms and the renewal of existing vehicles, they should prioritize multiyear investments that incorporate sufficient flexibility to allow CDFIs to direct dollars to their most useful purpose; expand existing mechanisms that are working; and launch new vehicles that build on successful programs at the federal level.

Scale up NYCEDC's neighborhood credit fund. Working with five CDFIs, NYCEDC provides credit enhancement for loans of $10,000 to $250,000 for the purposes of working capital, tenant improvements, refinancing of existing loans, and the purchase of machinery and equipment. The fund has been successful in helping CDFIs make more loans to underserved businesses by providing a two-to-one match on their reserves, but has received just a modest allocation of $2.5 million. Mayor Adams and the City Council should work with NYCEDC to expand the program to $10 million, potentially in partnership with philanthropic foundations and larger financial institutions.

Make the New York Forward Loan Fund a permanent program. State policymakers and Empire State Development should work with funders to continue the pandemic-driven New York Forward Loan Fund on a permanent basis. Launched in 2020, the fund provides working capital loans to small businesses and nonprofit organizations. The state provides first-loss capital for a special purpose vehicle that purchases locally originated loans. Foundations and philanthropies provide the next layer of capital, while banks contribute $100 million in senior debt to the vehicle. CDFIs are the conduit through which the money flows to small businesses around the state. Continuing the New York Forward Fund would greatly expand the reach of CDFIs into minority and immigrant communities, providing a reliable, ongoing source of capital in partnership with private industry and philanthropic partners. New York should also seek the participation of other states, such as New Jersey and Connecticut. Such an initiative would mirror the $50 million Southern Opportunity and Revitalization (SOAR) Fund, which includes 15 southern states and the District of Columbia as participants.

Fully fund and sustain the New York State Capital Access Program. Empire State Development’s Capital Access Program provides crucial matching funds that help CDFIs maintain their legally required loan loss reserves against potential defaults. However, ESD stopped providing reserves in February 2020, just weeks before the pandemic’s first wave peaked. Without these funds, CDFIs are obligated to devote more of their scarce capital to backstopping potential losses rather than lending it out to businesses that need cash to survive and grow. Fortunately, the state has directed a one-time influx of $29 million in federal COVID relief dollars to recapitalize the program, but there is no guarantee that this crucial vehicle will continue. State policymakers should work with ESD to baseline the program going forward, making it a permanent part of the state’s small business development strategy.

Ensure that at least $100 million in federal SSBCI funding flows through the state’s CDFIs—and sustain that funding going forward. New York State was allocated $501.5 million in new federal funding through the Small Business Credit Initiative (SSBCI), a part of the American Rescue Plan designed to address the economic impact of the COVID-19 pandemic on small businesses. This investment includes funding for technical assistance providers as well as start-up capital, and could be a gamechanger for CDFIs and their clients—but only if a significant portion of that funding is directed to them. ESD has taken some important initial steps to direct this funding to support the recovery and future growth of traditionally underserved small businesses; however, for this strategy to succeed, a significant portion of the funding—at least $100 million—should be channeled through the state’s CDFIs, and new programs should be developed in the coming years to help sustain the impact of this influx of funding on socially and economically disadvantaged businesses.

Bolstering Minority- and Immigrant-Owned Businesses by Scaling Up CDFIs is a publication of the Center for an Urban Future. Researched and written by Judith Messina with Eli Dvorkin. Edited by Eli Dvorkin, Jonathan Bowles, and Charlotte Crowe. Additional research by Matthew Friedman, Melissa Lent, Ben Rosenn, and Charles Shaviro. Designed by Stislow Design.

This study was made possible by HSBC. HSBC is one of the world's largest banking and financial services organizations, serving customers from offices in 64 countries and providing $127 billion in sustainable financing and investment in 2020 and 2021.


These Community-Oriented Lenders Have Remained a ‘Quiet Secret’

This study was made possible through generous support from HSBC.

These Community-Oriented Lenders Have Remained a ‘Quiet Secret’
The City

These Community-Oriented Lenders Have Remained a ‘Quiet Secret’
The City