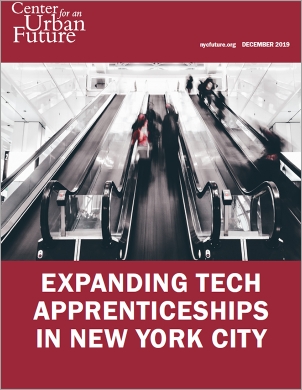 Tech apprenticeships present a major opportunity for New York to expand pathways into well-paying technology careers, all while strengthening and diversifying the talent pipeline for the city's booming tech sector. New York can do more to greatly expand tech apprenticeships in the city and realize the promise of this powerful model for boosting economic mobility.

by Eli Dvorkin and Judith Messina

Create 1,000 new tech apprentice positions in New York City by 2025. New York City is poised to add thousands of tech jobs over the next six years, including many in occupations that have effective apprenticeship models in other cities across the country. To help expand access to these fast-growing, well paying jobs while diversifying the tech sector, the city should set an ambitious but achievable goal of creating 1,000 new tech apprentice positions by 2025, becoming the leading hub for tech apprenticeship in the process. These apprenticeships should be created with a broad mix of partners, including in-house programs at tech companies; programs operated by intermediaries and training organizations; programs launched in partnership with CUNY; and programs launched by the city’s Department of Small Business Services.

Develop a NYC Tech Apprenticeship Accelerator to speed the design and approval of new programs. To make apprenticeship work for the tech sector, the design and implementation of new programs has to operate at the speed of the industry. Cultivating employer partners, designing programs, developing related instruction, and registering programs to enable tax credits can take years—a timeline that’s simply too slow for many tech companies to embrace. To speed up the process and help more effective apprenticeship models achieve scale, New York City should launch a Tech Apprenticeship Accelerator. Modeled on a series of initiatives sponsored by the U.S. Department of Labor in 2016, the NYC Tech Apprenticeship Accelerator would facilitate intensive assistance for businesses to jumpstart the development of a customized tech apprenticeship program; bring together interested training partners, educational institutions, and sponsor organizations to connect with employers; and create a platform for ongoing employer engagement and program development.

NYCEDC should convene a Tech Apprenticeship Summit to raise awareness of the opportunity. To develop a larger role for tech apprenticeship in New York City’s hiring landscape, more employers seeking to fill tech roles will have to commit to the model. But one major challenge to expanding the model is that relatively few tech employers are aware of the potential in the first place. The New York City Economic Development Corporation (NYCEDC) can play a major role in raising awareness about the value of tech apprenticeship by convening the city’s first Tech Apprenticeship Summit: a day-long event bringing together leading local and global tech employers with the training organizations, intermediaries, and educational institutions leading the charge for tech apprenticeship on a national level.

Support apprenticeship intermediaries to develop end-to-end services for tech employers. For the vast majority of New York City’s tech companies—including small and mid-sized start-ups, as well as larger companies with immediate hiring needs—moving into tech apprenticeship will require the support of a partner organization that can manage the whole process from end to end; develop and implement training; navigate the landscape of registration and corresponding incentives; and support mentorship and management during on-the-job training. The city’s economic and workforce development agencies should launch new RFPs focused on supporting these New York City–based intermediaries, including cultivating employer relationships through effective business development, designing and launching new programs, and scaling current models with a proven record of success.

Bring Apprenti to New York City. Across the landscape of tech apprenticeship programs nationwide, Washington State’s Apprenti program—which has expanded to twelve other states—stands out as a particularly effective and scalable model with a large number of current employer partners. City leaders should bring Apprenti to New York, where many of Apprenti’s employer partners like Microsoft and Amazon already have a significant presence.

Scale up Tech Talent Pipeline’s associate engineering program. The Tech Talent Pipeline’s associate engineering program is a promising model for connecting underrepresented talent with hands-on training and paid apprentice-like positions at growing tech companies. But expanding this program will take new resources to help support business development and employer cultivation, talent recruitment and vetting, and sustained support for associates and employers throughout the course of a program. The city should increase support for this innovative program and enable it to double over the next three years.

Expanding Tech Apprenticeships in New York City is a publication of the Center for an Urban Future. Researched and written by Eli Dvorkin and Judith Messina. Edited by Jonathan Bowles, Eli Dvorkin, and Laird Gallagher.


Five lessons to learn from Eric Adams’ State of the City

Opportunities for tech education in Queens are slim: Report